I could think of various alternative titles for Pyaar ka Punchnama:
n  Boys Will Be Boys, Girls Will Be Bitches
n  If Bitches Were Girlfriends Then They’d Ride Roughshod Over Men
Sorry for the unparliamentary language but I’m afraid I’ve never before witnessed such misogyny in a film, or emerged from a theatre in such a state of shock, thinking: “Whoa, that director must be really really really hating women!” 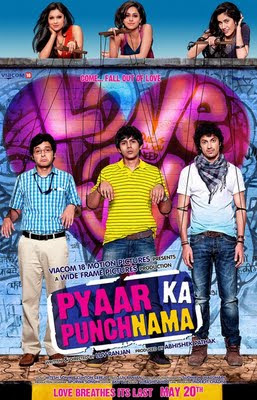 Pyaar ka Punchnama starts out being quite entertaining. Vikrant, Nishant and Rajat are friends and flatmates. Vikrant is the hottie-about-town who plays the guitar, sings and never wears pants when he’s hanging around in his flat. Nishant a.k.a. Liquid is foul-mouthed and ill-tempered. And Rajat is boyishly charming. Their only sore point with life is that they’re single. Not long into the film though, the three hook up with pretty girls. It’s all fun and frolic to begin with, and the relationship between the boys is played out very naturally. At first it seems like we’re in for a neat male-bonding flick. When misunderstandings begin to creep into each of the three boy-girl relationships, you hope that maybe a Saathiya in triplicate is about to unfold. When bitterness starts marring their ‘romances’, you suspect that this might be Bollywood’s take on Men Are From Mars, Women Are From Venus. But no, it’s none of the above.
Pyaar ka Punchnama is just a pure, out-and-out woman-hating film. Full stop. The dangerous thing is that at a certain level it’s slickly made. The newcomers in the cast (especially Divyendu) are talented and well suited to their roles. As a bonus, there’s model-turned-actor Raayo playing Vikrant who looks nice with and without his trousers on. The production design is good, as is the camerawork. And the dialogue writer shows evidence of a sense of humour. But the film kills its own amusing tone and descends into meaningless nothingness as debutant director Luv Ranjan marches forward with this single-point agenda: to prove that women are bitches! There is no logic and no sense of balance here. Each of the three girls in the film is a nasty, manipulative, scheming, cheating, double-crossing, lying, controlling, unscrupulous creep, with not a single redeeming feature! There is no other type of woman out there!!!
Don’t believe me? Okay, decide for yourself. Vikrant’s girlfriend is basically an easy lay. She has told him she loves him yet she sleeps with her ex-boyfriend. She also seems to have slept with most men in her social circle. Liquid is soft on a female colleague who is aware of his feelings but makes it clear to him that she has a boyfriend. She then milks Liquid for money, dumps her office assignments on him, treats him like an errand boy, blows hot and cold depending on whether she needs him or not, and insults him before her boyfriend and the entire office when she thinks he’s no longer useful to her. Rajat’s live-in girlfriend uses sex as a weapon, screeches, nags him unrelentingly, emotionally abuses him in every imaginable way, occasionally physically attacks him and (this one is really laughable!) gets him to wax his chest.
So no, this is not a his-version-versus-her-version film like He Said She Said, that’s fun to watch despite the male-female stereotyping. This is not about male buddies or how their relationships with women help and/or hamper their friendship (Dil Chahta Hai, Rock On). Pyaar ka Punchnama starts with the promise of being a satire on love before it becomes a frighteningly acidic story about how all women are evil creatures that men must avoid like the plague. In case you didn’t get the point from the one-dimensional characterisation of the women, the director throws in doggie sounds in the background each time the boys succumb to feminine wiles. And as if that’s not enough, there’s even a song about the boys being “kuttas”.
It’s possible that the writer of this film has personally met women like Pyaar ka Punchnama’s Riya, Charu and Neha. I’m not denying that such individuals exist. But to bring all these awful creatures together in one story is as ridiculously biased as it would be to make a women-centric film in which three girlfriends who are flatmates hook up with three guys, and all three men turn out to be the epitome of evil: one is a rapist, the other is a girlfriend beater and the third is a paedophile who doesn’t spare even his own child. Would a film like that be believable to you? If not, then nor will Pyaar ka Punchnama.
Rating (out of five): *1/2
CBFC Rating:                       U/A with four cuts. The film was initially offered an A certificate, but was finally awarded a U/A after the Censors got the director to: (1) reduce the duration of a brief scene in which a couple peck each other on the lips; (2) reduce shots of a woman’s cleavage when she bends to sweep the floor; (3) reduce one shot of one of the heroes in briefs; (4) remove a shot where a character is shown throwing a ball at another boy’s crotch. The Censor Board also got the director to beep out the words “bitch”, “ass” and “boobs”.
Running time:                        149 Minutes
Language:                              Hindi
Photograph courtesy: http://www.facebook.com/#!/PyaarKaPUNCHnama
Anna MM Vetticad at 9:41 PM
Share