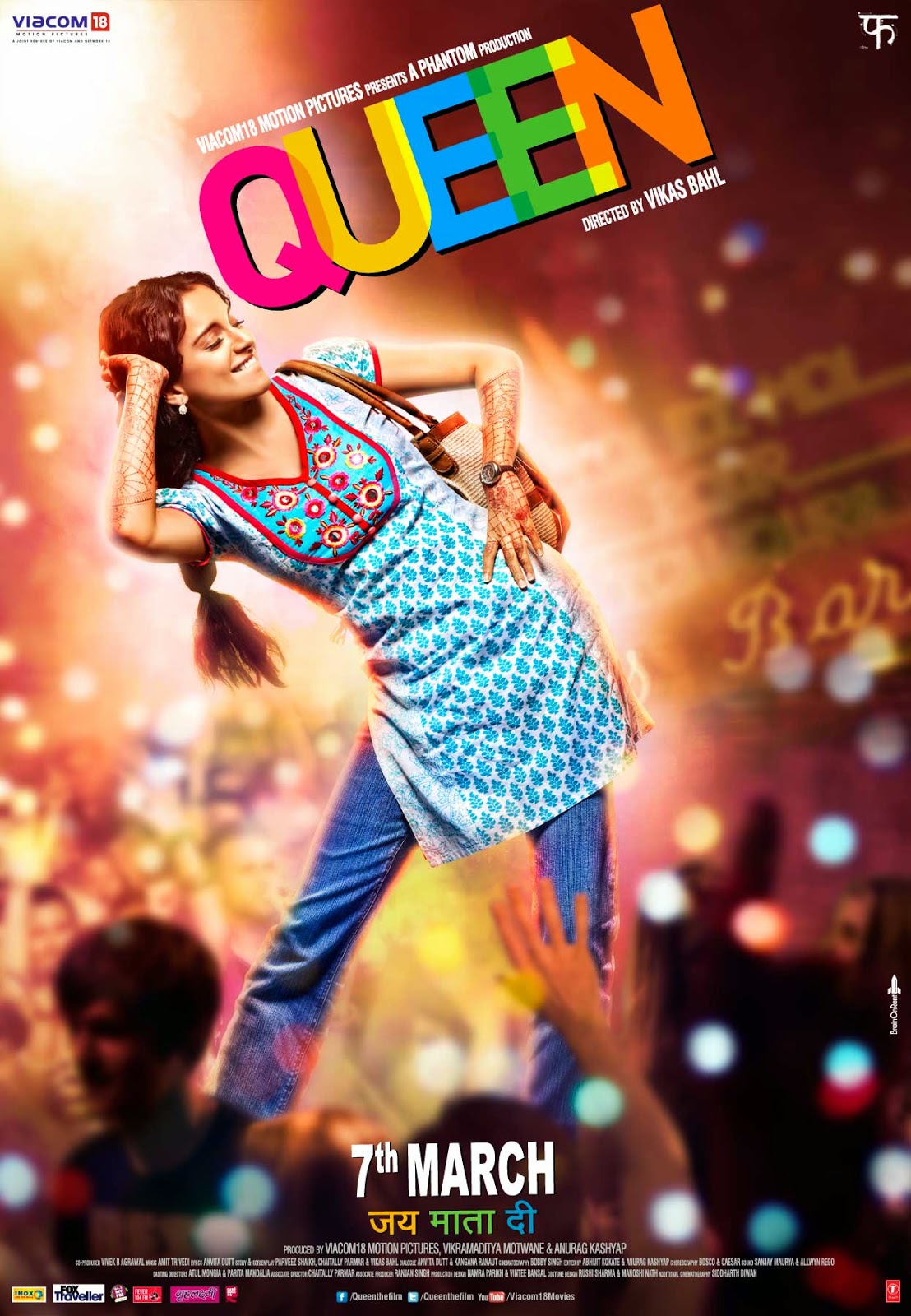 And THIS, my dear Bollywood, is how it’s done!

Director Vikas Bahl’s Queen is a slap in the face of every Hindi filmmaker and analyst who continues to insist that women-centric films can’t be light-hearted entertainers; that socially conscious films can’t be fun; that “thoughtful” and “hilarious” are mutually exclusive qualities for films. It also comes as a relief to all those who’ve been waiting for Kangna Ranaut to deliver on the promise she showed when she first entered Bollywood. Playing Rani Mehra – a woman ditched at the altar by her obnoxiously controlling MCP fiancé – Ranaut pulls out all the stops to show us what a nuanced performer she can be, given the right role and director.

Queen’s Rani is an ultra-conservative young woman from Delhi’s Rajouri Garden, whose protected upbringing belies her family’s quiet liberalism that we discover as the film rolls along. When her fiancé Vijay (Rajkumar Rao) decides he’s too good for her just hours before their wedding, she is at first crushed but then decides to take off on her own on the honeymoon she had planned for both of them. For a woman whose family has rarely let her out of their sight until then, Paris-in-solitude followed by Amsterdam are more than mere adventures.

Far removed from the watchful gaze of her loved ones, the strictures of the demanding ex-fiance and the constraints of living among one’s own, Rani bonds with a kind-hearted and promiscuous half-Indian female hotel employee, befriends a multi-cultural trio of gentlemen, learns to take care of herself, discovers the difference between a protective buddy and a suffocating boyfriend, realises that men outside the family circle are not necessarily predators, meets male strangers who are more genuine than female kin, gets an inkling of the career she could have, and kisses a cute Italian. The scenarios are all so real, uniformly sweet, inspiring, comical and bereft of clichés, that we must doff a hat to all the writers involved: story and screenplay – Parveez Shaikh, Chaitally Parmar, Vikas Bahl himself; dialogues – Anvita Dutt, Kangna Ranaut. More than anything else, they must be lauded for not dictating definitions of liberalism and conservatism, and for the non-judgmental tone they adopt towards Rani’s friends in Europe, neither glorifying nor condemning their lifestyles, simply telling it like it is.

Although Queen travels the world with Rani, cinematographer Bobby Singh sticks to the mood of the film: instead of sweeping shots of the cities our heroine visits, he opts for intimate views of the spaces she occupies. Even the costume design by Rushi Sharma and Manoshi Nath is steeped in the subtlety that pervades the entire film. By the end of the story, Rani has acquired a sophistication that is not brought about by an overly dramatic alteration to her wardrobe (no, she does not jump from salwar suits to minuscule skirts); it comes from a shining inner confidence manifesting itself in marginal changes in her style.

At the centre of it all is Kangna Ranaut. As Rani swings between reticence and confidence, Ranaut communicates her character’s confusion and evolution in a manner that’s astoundingly sincere, effective and low-key. Her face has always managed to convey subtle emotions. The thick-voiced dialogue delivery that has been the bane of her performances so far has improved greatly. That voice gives way just once in this film, in a scene in Amsterdam when she yells at Vijay. This is, without a doubt, Ranaut’s most well-written and well-acted role till date.

Casting directors Atul Mongia and Parita Mandalia have picked actors for the smaller parts too with attention to detail. Rajkumar Rao gets limited screen time yet manages to dig his heels into the role of Vijay, a man in love yet too selfish to rise above his patriarchal mindset for the woman he loves. Model Lisa Haydon is a revelation as the other Vijay in Rani’s life, or rather, Vijaylakshmi the hotel staffer who guides Rani through her time in Paris. What a sparkling performance, Ms Haydon. Vijaylakshmi’s interactions with Rani also give us that rare instance of girl bonding in a Bollywood film.

Of the bit-part players, it’s hard not to be charmed by sweet-looking Mich Boyko as the graffiti artist in Amsterdam or to be drawn to Marco Canadea’s emotional, arrogant, over-wrought, attractive Italian chef. It would have been nice to know just that tad bit more though about Guithob Joseph’s musician Tim, especially because black actors are rarely seen in Hindi films (Bollywood’s idea of “foreigners” tends to be white folk) but that’s a wish, not a grievance. The film’s only truly false note comes from the Muslim prostitute in Amsterdam whose heavily Urdu-laden dialogues seem to flow awkwardly off her tongue.

Vikas Bahl earlier co-directed Chillar Party, which was nice in parts but so-so elsewhere.  Queen, on the other hand, is a thoroughly accomplished film. Bahl’s understanding of a woman’s psyche is so remarkable, it’s as if Rituparno Ghosh has been reborn. Queen is what EnglishVinglish might have been if Sridevi’s character had discovered herself before marriage. Come to think of it, how lovely it would be to get a Queen II or an English Vinglish II in which Rani Mehra and Shashi Godbole become fast friends. That’s an aside for the future. In the here and now though, there’s Queen: a delightfully funny, sensitive, small, simple-but-not-simplistic film about coming of age past the age when most people get to do that. In a sense, it’s a sign that Bollywood too is coming of age. Queen is a royal triumph.