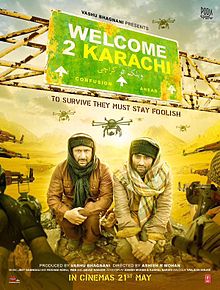 It could have been titled 2 Idiots. Welcome 2 Karachi is the story of a foolish Indian duo who get caught in a storm while sailing in the ocean and are washed up on a beach in Karachi. Shammi (Arshad Warsi) and Kedar (Jackky Bhagnani) encounter jehadis, local intelligence officials and the CIA while on Pakistani soil. They also accidentally blow up a Taliban camp, and are caught in a tug of war between India, Pakistan and the US, with each of the latter two countries claiming the men as their own in a bid to get credit for the destruction of those Talibs.

As you can imagine, the basic plotline is brimming with potential for a whopper of a comedy. The presence of Warsi – one of Bollywood’s best – as one of the leads is further cause for optimism. Sadly, these positives fade into insignificance in the face of a loosely written script, Bhagnani’s desperate attempts to act and the lackadaisical, seemingly disinterested direction by Ashish R. Mohan who earlier helmed the Akshay Kumar-starring superhit Khiladi786 in 2012.

Not that Mohan can be blamed for the presence of young Bhagnani in the cast – the child is, after all, the son of this film’s producer Vashu Bhagnani. Ever since he made his screen debut in 2009 with Kal Kisne Dekha, Bhagnani Junior appears to have been trying his best to become worthy of the space before the camera that his father’s wealth has got him. He continues to work out to achieve those ample biceps and that trim torso, but no gym in the world can relax an actor’s facial muscles. After six years of trying, he ought to face the truth that he is not cut out for this.

Warsi is occasionally listless but for the most part throws himself into the film with his trademark gusto. He is, however, done in by direction so directionless that it feels as though Mohan let go of the reins early on in Welcome 2 Karachi.

Slapstick comedy can be fun. Considering that the India-Pakistan relationship is this film’s hunting ground, it had the potential to be insightful and satirical even within the slapstick genre. For that to happen though, it needed to avoid wandering all over the place. That, unfortunately, is where the film fails miserably. In the absence of crispness in its storytelling, Welcome 2 Karachi is a stark reminder to those who are dismissive of effective farces that it is not easy to do what Rohit Shetty and David Dhawan do, on the occasions when they do it well.

Considering the absurdity of the Indo-Pak reality, there are many situations in this film that are hilarious at the concept level. The execution though is decidedly dull, with a few exceptions such as a scene in which Shammi loses all self control and drops his pretence of being a Pakistani in a crowd of Pathans, while watching a cricket match between the two countries.

Sure there is some stereotyping in the film, but it is good natured and well meant, with potshots being taken at people from both sides of the border. To object to that would be churlish, especially since the ultimate goal of the film seems to be to establish that though governments are bad, people are not, and mushkil waqt main, padosi hi padosi ke kaam aayega (in times of difficulty, it is neighbours who can be most relied upon to come to a neighbour’s aid). Now if only good intentions were the key to good cinema, Welcome 2 Karachi would be a winner.

There are many scenes in which the film seems on the cusp of becoming something special, but each time it fails to ride over that cusp. As it stands, W2K’s narrative is looser than the drawstrings on a pair of pyjamas that are falling off their wearer.

A song in the film has lyrics that go thus:

The polite translation and précis of those lyrics would be: if you don’t run to save your life, you will get a kick in your … err … backside. Perhaps there’s a hidden message in there for potential viewers.

Posted by Anna MM Vetticad at 6:56 PM No comments: 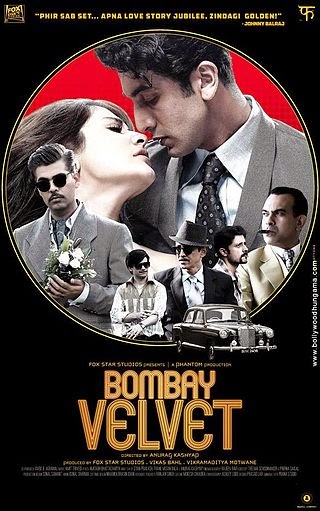