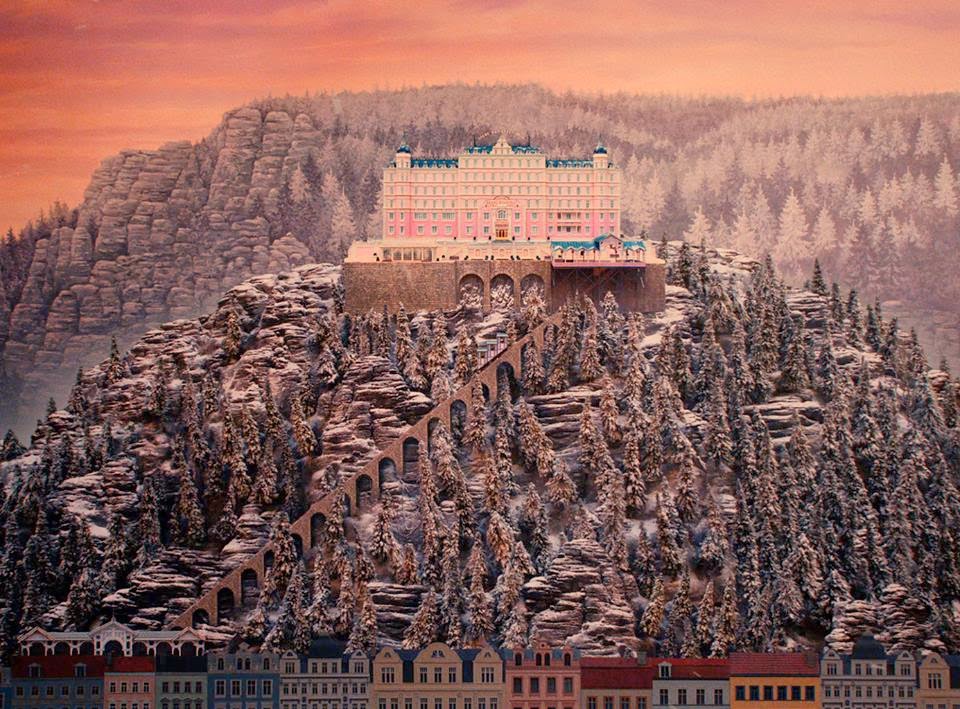 Wes Anderson’s The Grand Budapest Hotel is a quaint, quirky, wacky, whimsical little film that disguises its depth and beauty in seeming simplicity. In one sentence, this is the story of an old man relating to a young writer the events that led to him becoming the owner of a premier hotel perched on a mountaintop in the historic city of Budapest. In 99 minutes what we get is a poignant lament – couched in farce – for times gone by, steeped in humour, historical references, social commentary, suspense and intrigue.

Using a flashback-within-a-flashback-within-a-flashback format (quite remarkably without getting confusing at any point), the film first shows us a girl marching up to a monument to a writer in a cemetery. She then starts reading from a book, and what we get is an old man known only as Author (Tom Wilkinson) narrating from his desk in 1985 the tale of a trip he made to the once-lavish, now-declining Grand Budapest Hotel in 1968 where he (his younger self played by Jude Law) met its elderly owner Zero Mustafa (F. Murray Abraham), who goes further back in time to reveal how he came to be in possession of this property.

The film’s primary plot is set in early 1930s Europe, in the fictional Republic of Zubrowka where the decadent rich while away their time, seemingly oblivious to the extreme poverty and Hitler’s forces, both of which are just around the corner. The Grand Budapest is run by the fastidious Monsieur Gustave (Ralph Fiennes), the concierge whose impeccable services include bedding many among the wealthy old women who frequent his establishment. An immigrant of indeterminate nationality, the young Zero (Tony Revolori) is at that point being trained as a lobby boy by Gustave.

Gruesome murders, greedy children, a stolen painting, a ridiculously improbable prison escape, a cold-blooded assassin, thrilling chases down snowy mountain slopes and through hotel corridors, pretty pastries, a shootout, an unlikely friendship and true love are all served up on this delicious platter by Anderson.

The director’s visual signature is all over this film with its painterly settings deliberately designed to resemble picture postcard images – somewhat removed from reality even while capturing it. Interestingly enough, despite using live actors, Anderson manages to create a look reminiscent of Steven Spielberg’s 3D motion capture film The Adventures of Tintin: The Secret of the Unicorn (2011) and Herge’s comic books. It seems to be intentional. The hotel’s facade, for one, is a curiously fascinating celluloid confection, something like Hansel and Gretel’s fairytale candy house with pink frosting.

The charismatic Fiennes here seems to be revelling in the opportunity to set aside his usual naturalistic approach to acting for this oddball project. Newcomer Revolori is a revelation. As delightful as their performances is the joy of spotting an army of major stars appearing throughout the film in small roles, some of which are significant and some not: a virtually unrecognisable Tilda Swinton looking like what Marge Simpson might be at the age of 200, Jeff Goldblum, Adrien Brody, Willem Dafoe, Saoirse Ronan, Bill Murray, Owen Wilson. Goldblum as a weird lawyer and Dafoe as a brutal hitman are particularly memorable.

I won’t list the entire cast here (yes, there’s more!) because playing spot-the-star is a game many in the audience could enjoy. Anderson himself is evidently having fun not just with the overall job at hand but with the casting too.

The director of The Royal Tenenbaums and Moonrise Kingdom has credited the works of Austrian novelist Stefan Zweig as his inspiration for The Grand Budapest Hotel. Knowing that adds a touch of melancholy to most possible interpretations of this film since the character known as Author appears to be modelled on Zweig himself. The rise of the Nazis prompted the real Zweig – who was a Jew – to flee his motherland. He reportedly committed suicide many years later along with his wife, apparently in despair at being a man without a country.

The film won the Silver Bear Grand Jury Prize at this year’s Berlin International Film Festival where it was the opening film. It has made its way to India about five months after hitting theatres in the West. For Indians who couldn’t bring themselves to wait for the official release and found a way of watching it anyway, here’s a tip: some films are born to be seen on the big screen.

The Grand Budapest Hotel is such a nuanced affair, that after watching it in its entirety, it’s still hard to decide whether to consider it a comedy or a tragedy. Is it just a light-hearted frothy entertainer referencing a bygone cinematic world? Or is it – as Roberto Benigni’s Life Is Beautiful managed so effectively to be – a stinging criticism of war and violence despite its deceptive veneer of playfulness and fun? Perhaps it is both, perhaps it is neither. What it is for sure is an experience.