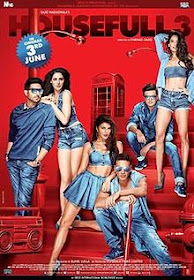 One of the formulae most often visited by Bollywood comedies is the business of assigning a distinctive quirk to major characters in a story. The writers of Housefull 3 are clearly very enthusiastic about this device since they use it rather generously in their film.

And so: Sandy suffers from Dissociative Identity Disorder, which results in the emergence of his violence-prone, self-destructive alter ego Sundi every time someone utters the word “Indian”. Teddy is congenitally confused by words, for instance saying “tawaif” for “wife”. Gangster Urja Nagre (Jackie Shroff) has a penchant for coining acronyms at the drop of a hat, such as ATM for “Ab tu marega” and WTF for “Wednesday Thursday Friday”. And the film’s three leading ladies apparently speak such poor English that they fill their Hindi speech with literal translations of popular English phrases.

Not counting the insensitivity towards a serious mental disorder, the rest are ruses that, when intelligently used and well-timed, could actually make for a good, old-fashioned, rollicking nonsense comedy. Remember Mrs Malaprop from Richard Sheridan’s The Rivals and Dogberry from Much Ado About Nothing? The problem arises because writer-directors Farhad-Sajid and their co-writer Rajan Agarwal appear to have invested little thought in their film once they came up with a quirk per character. Worse, they over-use each one till kingdom come.

The ladies, for instance, dispense so many mixed, confused metaphors that you could fill up a few pages by just listing them. Here are some that I can recall off the top of my head:

“bandook ke bachche” for “son of a gun”

Firstly, whatever be the solo merit of any of these lines, picture a film in which one of these comes up once every few minutes and they get progressively less imaginative with each passing moment. Second, these lines are a poor quality lift of an idea from Bol Bachchan in which Ajay Devgn’s character insisted on speaking English although he was terrible at it. His version of “don’t poke your nose…” was: “When elder get cosy, younger don’t put nosy.” It was all quite ridiculously hilarious. Farhad-Sajid, who wrote the dialogues for Bol Bachchan, seem unable to even effectively borrow from themselves in this film.

That is Housefull 3 for you, taking the audience lightly with lazy scripting, skating along instead on the charisma and goofiness of its central male star, goodwill for many of the remaining cast members and occasional patches of witty absurdity.

The story is set in London where shipping magnate Batook Patel (Boman Irani) lives with his daughters Ganga (Jacqueline Fernandez), Jamuna (Lisa Haydon) and Saraswati (Nargis Fakhri). Patel refuses to get them married for reasons we discover by the by. A fake prediction – never mind what – by a fake astrologer (Chunkey Pandey) leads the women to request their respective boyfriends to lie to their Dad.

Ganga is a doctor whose football playing beau Sandy (Akshay Kumar), also her patient, must pretend that he is a paraplegic. Jamuna is dating race car driver Teddy (Riteish Deshmukh), who is compelled to play-act blindness. And the man Saraswati loves, aspiring rapper Bunty (Abhishek Bachchan), is forced to feign muteness. A subsequent misunderstanding results in another character thinking that Sandy is blind, Teddy is mute and Bunty is wheelchair bound. The result is confounded confusion.

That is not necessarily a bad thing. Confusion can be a good thing in comedy. Now that it has been used for centuries to evoke laughter though, it takes a helluva team to extract anything more than the usual clichés from a story of identity mix-ups, lies within lies within lies and other mad muddles. The makers of Housefull 3 are not that team.

This is what comes of pointedly aiming only at viewers who are easily pleased. The first film in this series – directed by Sajid Khan – was fun despite its unabashed stupidity (possibly because of it), but it has been downhill since then. Khan directed Housefull 2 and managed to extract some laughs despite the fact that it was crude and callous, featuring, among other things, a rape joke, a leering father-in-law making advances towards his future bahu, a crocodile biting Deshmukh’s bottom and a python latching on to Shreyas Talpade’s penis. Large parts of Housefull 3 are just flat.

The writing is also curiously confused and lackadaisical. For instance, when Patel introduces us to his daughters, he describes them with great pride as “sanskaari” girls, at which point all three are clad in Indian attire. Later, they are shown leaving the house surreptitiously in skimpy Western wear, to prove that they were fooling their Dad about their adherence to Bhartiya sanskriti and sabhyata. Yet in later scenes they blithely appear before Daddy in revealing Western clothing and he does not bat an eyelid, as though that plot point has been forgotten.

And oh puhleeeeeeease, do not bore us with that cliché that critics do not like light-hearted comedies, which is being fed to viewers by some producers. Hrishikesh Mukherjee’s Gol Maal and Chupke Chupke, Priyadarshan’s Hungama, many of David Dhawan’s collaborations with Govinda, Abhinav Kashyap’s Dabangg … I can rattle off the names of nutty films I’ve loved. The Akshay Kumar-starrers Singh Is Kinng, Welcome, Namastey London and Desi Boyz too had plenty to offer fans of humour.

And puhleeeeeease, do not confuse crassness with political incorrectness. Two of the best American television comedies running in India right now – The Big Bang Theory and Two Broke Girls – are terribly non PC and make all kinds of jokes directed at various races, religious groups and across genders. Thing is, they know how to be irreverent without being gross or creepy. Towards the end of Housefull 3, when each of the three male leads ends up with a woman other than his girlfriend in his arms, Sandy orders them to pair up with the right woman in these words: “apne apne maal ke paas jaao yaar.”

It is a wonder why Kumar – whose goofiness is perhaps the best thing about this film – does not realise that there is a place in this world and box-office success to be earned from understated comedy. I mean, Ajay Devgn persists with the Golmaal series but he has also tried his hand at the relatively low-key, thoroughly enjoyable Atithi Tum Kab Jaoge, right? Kumar seems not to have the mindspace for something like that, although he clearly has the talent for it. Even within the arena of mindlessness and loudness, he seems to be taking his audience for granted too often with the likes of Housefull 3 and Entertainment (which, incidentally, was also directed by Farhad-Sajid).

Bachchan Junior has always had a pleasant screen presence, and it is nice to see him in a film after such a long gap, but his role here has very little meat. Deshmukh is one of the best comedians in contemporary Bollywood, but he is criminally under-utilised. The three women here are treated as visual attractions and nothing else, which is disappointing because Haydon was such a live wire in Queen (2014) and Fakhri, who is limited elsewhere, revealed a funny bone and a charming ability to let her hair down in the Varun Dhawan-starrer Main Tera Hero (2014).

The only actor other than Kumar who makes somewhat of an impact in Housefull 3 is Boman Irani who lifts the film in many of his scenes. Jackie Shroff, who deserves better, is wasted.

The indolence in the writing of Housefull 3 is best illustrated by the profusion of self-referential jokes in the film. I mean, c’mooooooonnnnn, how many times are we expected to be amused by Deshmukh breaking into Marathi in the heat of a moment? Is it really laugh-worthy that he addresses his girlfriend Jenny a.k.a. Jamuna in the film as Genelia? Yawn. And how many mentions of the Bachchan family will we hear around Abhishek? C’mooooonnnnn, think of something new!