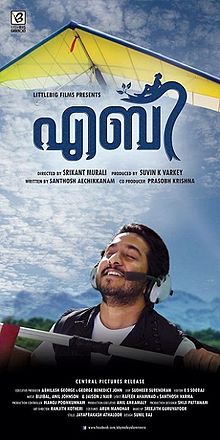 If good intentions were all it took to make a good film, then cinephiles would be a much happier lot. Director Srikant Murali’s Aby, without question, has its heart in the right place. The problem with that heart? It struggles to beat.

Vineeth Sreenivasan plays Aby, a young man in rural Kerala who was born socially inept and seemingly mentally slow but turns out to be a scientifically inclined prodigy. From his early childhood, Aby has wanted to fly. Like Icarus and others before him, over the years he takes a string of uninformed risks to fulfill his dream. When he starts building a plane as an adult, he gets backing from unexpected quarters – but not from his father.

Aby’s mental challenge is compounded by his life-long troubles with that father (Sudheer Karamana), a violent alcoholic who is responsible for the premature death of the boy’s mother (Vineetha Koshy). The film is about Aby’s aspiration and the support he finds along the way from an array of people including kindly strangers, the woman he loves, Anumol (Mareena Michael), and a struggling, drunken businessman (Manish Choudhary) in Bengaluru.

In short, this is a story of a man-child who struggles to reach the sky and those who are able to look past his disability to spot the genius within.

A promising premise, no doubt, but one that – unlike the leading man – never lifts off. The early scenes featuring little Aby, his beleaguered mother and cruel father are the highlight of the film. A large part of the credit for this must go to the three actors involved, especially the impressive child artiste Vasudev. These introductory passages evoke empathy for the kid and establish an appropriately sombre mood, but wait as you might for this flight to take off, it does not.

Director Srikant Murali’s narrative is too languid to hold interest, and Sreenivasan is trying too hard to be cute, making this an unintentionally patronising take on a PwD (person with disability). The rest of the cast – especially Michael and Karamana – are strong, but when the lynchpin is wobbly, what can the best of performers do?

Santhosh Aechikkanam’s writing meanders as much as Murali’s directorial choices. Particularly odd is the conceptualisation of GK and the inexplicable casting of Bollywood actor Manish Choudhary rather than a Mollywood actor to play him. Apart from the hero’s father, GK is the only person with a commanding presence in Aby; in a film where every single primary character is Malayali, he is not one; he appears to be north Indian and speaks a mix of Malayalam, Hindi and English, attracting awed whispers from locals when he visits Aby’s village, an assumption on sight that he is a “veliya” (big) man, and by his mere presence disrupting the equanimity of the authorities who are, at that point, trying to stop Aby from flying.

In the unlikely scenario that Murali is using GK’s character to make a larger point about how Malayalis look up to north Indians, that point is lost here. Since the idea of an outsider from the big city automatically getting respect from a rural populace could as well have been conveyed with a Malayali character, it seems like Murali himself is unwittingly revealing his own reverence towards Hindi-bhaashis here.

Or perhaps not. Perhaps he just likes Choudhary and wanted to cast him in the film. I have no idea. Point is, the film’s problems are exemplified by this episode: it is inconsistent (the humane GK suddenly turns selfish and ferociously against Aby for no reason), it lacks detailing (the satellite characters are poorly fleshed out and consequently unappealing), it does not make the science interesting (try watching the Oscar-nominated film Hidden Figures currently in theatres, to understand how a filmmaker might build highly relatable scenes around mathematics that the average viewer would obviously be clueless about), it is ungainly, vague and all over the place.

So is the film.

Aby proves that the road to hell is not the only one paved with good intentions. So too is the road to ordinariness.