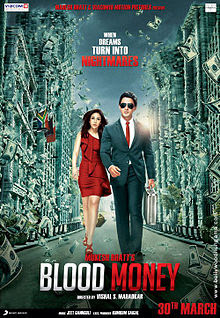 Here’s another one of those don’t-hate-it-don’t-love-it-don’t-like-it-don’t-dislike-it-already-forgotten-it kind of movies. Frankly, I can’t figure out why the Bhatts bothered to make Blood Money. Just a few minutes into the film, I was pretty sure it was headed the way of the Tom Cruise-starrer The Firm based on the book by John Grisham. It’s possible that other parallels may wander into your head while you watch Blood Money. Either way, the point is that the film lacks novelty. An oft-visited plot could still have been worth watching if there was something unique about the treatment. Unfortunately, despite a start that suggests that there might be some entertainment to be had in this film, those early gains are frittered away in a crowd of cliches.
Blood Money is the story of a youngster living out The Great Indian Dream – videsh mein naukri, shaandaar bangla, etc etc. Mumbai struggler Kunal (played by Kunal Kemmu) lands a job in a diamond trading company in South Africa. When he arrives in that country, his new employers shower him with perks that far exceed his expectations, including a palatial house that at some point makes his worry wart of a wife Arzoo (Amrita Puri) think of the old children’s fable Hansel and Gretel. Is Kunal’s new boss the witch who has lured them into a delectable house made of sweetmeats, while planning to devour them himself?
So far so good. South Africa looks good. Kunal looks good. Amrita looks good. The house looks good. Her clothes look good. The jewellery he buys her looks good. The office looks good. But the narrative lacks depth, and even those twists in the tale are doled out in such a lacklustre fashion as to be no fun at all.
Little Kunal Kemmu (yup, new spelling) is that rare child actor who has grown into an adult with as personable a screen presence as he had when he was a little boy. His previous big-screen outings as a grown-up suggest that he has the acting chops to match those biceps. But his earnestness and youthful good looks deserve better than this tepid film. The one thing he can be grateful for though is a love-making scene in Blood Money in which his bare torso has been blessed with better lighting than many of his senior topless male counterparts have ever been given! C’mon Bollywood, now give him a better film!
Kunal’s boss is played by Manish Chaudhary who we’ve earlier seen in supporting roles in Rocket Singh: Salesman of the Year and several other films. He’s interesting on first viewing but now seems to be settling into a certain sameness in his performances. There’s an interesting actor in a very small role as Kunal’s colleague Sean Mathews – would be nice to see how he turns out playing a larger part in a better film. Amrita Puri was the heroine’s “behenji” protégé in Aisha in 2010. Her rasping voice was fine for that role but could have done with some modulation in this film. Still, there’s something to be said about the acting skills of a girl who could play a country bumpkin with alacrity on debut, and look just as convincing as the more Westernised Arzoo in her second film. She does not come across as a wannabe but actually fills out those glamorous dresses quite nicely in Blood Money!
What’s irritating about the film though is the trite manner in which the actress’ child-like countenance and minimal makeup are seemingly being used as a metaphor for the middle-class innocence of the lead couple’s background, to be contrasted with the situation that they’re currently mired in. In one melodramatic scene, her simple face is shown in close-up as she performs pooja with a pristine dupatta on her head while her husband sprints through the city after being stabbed viciously in the stomach. I may not make it, he gasps to her on the phone. You have to return to Mumbai with me, she replies, before wailing out a line that seems completely alien to her personality as it’s been presented to us so far, “Main yahaan se vidhwa hoke nahin jaana chahti (I don’t want to return home a widow).”
The memory of that dialogue reminds me of another scene in the film in which Kunal mocks his bête noir for laying a trap that is so “out of a 1980s Hindi film”. It’s a rather nice, self-mocking moment that the writing team fails to take forward. And unfortunately it ends up as an apt description for Blood Money as a whole: so out of a 1980s/90s Hindi film dressed in 1990s-to-2010s style with pretty people in pretty clothes in pretty foreign settings as compensation for the lack of a solid, well-fleshed-out story!
At one point, when the hero is at a crossroads in his life, his voiceover tells us: “Log zyaadatar imaandar hote hai kyunki unhe bura banne ka mauka nahin milta (most people remain honest because they don’t get an opportunity to turn bad).” But again, the writing team fails to take that introspective tone forward. This film could have been something I guess, but the production house does not seem to have cared enough to push the team to try. As I said at the start: don’t hate it, don’t love it, don’t like it, don’t dislike it, already forgotten it! Wondering why they made it!
Rating (out of five): *1/2
CBFC Rating:            U/A
Language:                  Hindi


Agent Vinod is not one of those films that has made me angry. Such feelings are reserved for jewels like Ram Gopal Varma ki Aag and Mani Ratnam ka Raavan. But methinks indifference is sometimes worse than anger, and that one word sums up my reaction to this film. 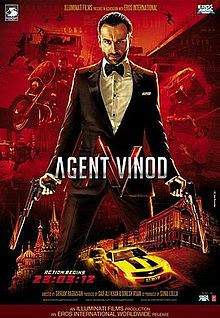