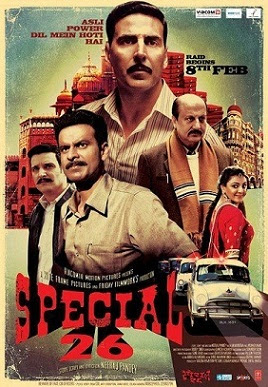 When the word “interval” flashed on screen halfway through Special 26, I remember being taken aback. Hadn’t the Censor certificate indicated a much longer film? How come the interval had arrived so fast? A glance at my watch indicated that approximately 1 hour 15 minutes of the film had already rolled by! Whaaaaaaaaat?!

When a nearly two-and-a-half-hour film feels like it’s short, you know it’s special. Special 26 is about a quartet of con men in 1987 who pose as CBI officials and conduct fake raids on black-money-laden politicians and businesspersons. The story is as basic as that. But with the treatment of the cons, the audacity of the players in this game and the cool-headedness that helps them get away with their crimes, writer-director Neeraj Pandey ends up giving us a thoroughly enjoyable suspense drama – based partly on real-life events – that also serves as a stinging indictment of our loophole-ridden criminal investigation system without tomtomming the message, all while examining the psychology of the corrupt. It is, as a certain lady from another film might have said: entertainment, entertainment, entertainment.

A neatly understated Akshay Kumar as the leader of the gang and Anupam Kher as his loyal cohort play off each other very well to deliver engaging performances. With OMG Oh My God and now this film, it’s clear that Akshay is trying to take his career in a whole new direction, which is a relief because this is an actor who has grown tremendously since we first saw him on screen and he really does owe it to himself to do more than gaudy comedies like Rowdy Rathore and Khiladi 786 that are indistinguishable from each other. In a role that unfairly gives him far less scope to display his acting skills, Rajesh Sharma as Joginder proves that great actors often rise above lack of screen time and dialogues. That one look of desperation he throws at Ajay when a particular raid seems to be flopping is a lovely reminder of the actor who played the corrupt-yet-good-hearted cop in No One Killed Jessica and that scintillating scene where he casually mentions to Sabrina Lal that he took a bribe to not beat up her sister’s killer in custody. The entire cast (Jimmy Sheirgill, Divya Dutta in a small role and Deepraj Rana) acquit themselves well. But the stellar performance in Special 26 comes from Manoj Bajpayee whose turn as the straight-talking CBI official Wasim Khan is his best in years (yes, I say that despite the accolades that have come his way for Gangs of Wasseypur 1). And when did this man become so thin? Did he lose weight for this role? Must say the extra lean look suits Mr Bajpayee!

It’s also nice that Akshay does not hog screen space in Special 26 although he’s the superstar of the bunch. But then the question arises: why does the film feel the need to assign a mandatory “love interest” to Ajay although he is not a stereotypical Bollywood hero? That romantic track unnecessarily slows down the film especially since every appearance by the girlfriend (played by Kaajal Aggarwal who looks too young for Akshay) is accompanied by a loud, tuneless, superfluous song. That brings me to the music by M.M. Kreem whose Tu miley dil khiley from Criminal still haunts me. In Special 26, his work is a huge disappointment.

The pointless love angle notwithstanding, the screenplay is taut and crisp for the most part, peppered with cheeky dialogues epitomised by the honest official who asks his boss straight to his face: will you give me a promotion or should I start taking bribes? For a change, the cops actually look and behave like real cops instead of actors-playing-cops-and-robbers. The art direction, costumes and styling are impeccably 1987, right down to the ancient Maruti 800s and a relatively empty Connaught Place in Delhi (empty! imagine that!) through which we witness one of the most exciting chases seen in a Hindi film in recent times. Though we are told next to nothing of the four crooks’ backgrounds and barely anything about Wasim Khan either, the brief shots of their home spaces – the elderly man with lots of children and the pregnant wife in Chandigarh, the doting middle-class dad who orders a woman to cover up her cleavage when in public, an overhead shot of an Old Delhi home – are deliciously telling. We didn’t really need to know anything more, which is why we could have done without the passing reference to Ajay’s motivations for forming his gang … half-baked, unconvincing, quite like the attempt to explain the title by one of the characters. And it’s rather inexplicable that despite the stashes of cash they’ve looted, the gang don’t seem to have much money. Still, the execution of the heists is so entertaining that these flaws somewhat fade into the background by the end of the film.

Neeraj Pandey’s earlier film A Wednesday was an equally well-produced, entertaining film though its populist political stance was disturbing: in its indirect call to the general public to take the law into their own hands, the film unabashedly and irresponsibly played to the gallery in an angry, terror-ridden India. Special 26 taps into the prevailing frustration with corruption and the “system” but stops short of glorifying the con men, simply telling it like it is.

Bollywood rarely does thrillers, and the few it takes up are rarely well done. That’s why Special 26 is such a very pleasant surprise.
Rating (out of five): ***1/4 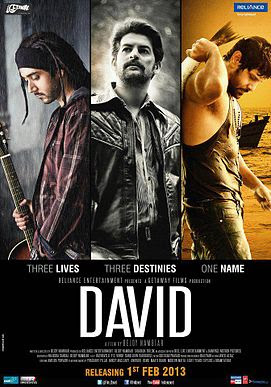