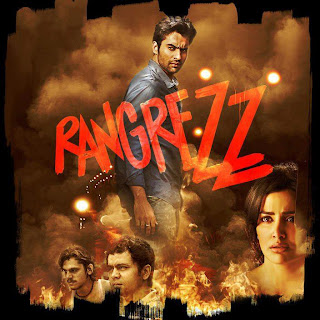 I have to confess I enjoyed watching Rangrezz for the most part. Sometimes though, the message a film sends out in the final few minutes can be so offensive, so disturbing and so objectionable that all the good direction, slick action and beautiful music that came before is simply dwarfed.

Rangrezz is the story of three friends who decide to help a fourth friend elope with his lover since her father is dead against the relationship. Rishi (Jackky Bhagnani), Pakiya (Vijay Verma) and Vinu (Amitosh Nagpal) risk life, limb and family to bring Joy (Raghav Chanana) and Jasmine (Akshara Gowda) together in one of the most brilliantly executed, breath-stopping action sequences I’ve ever seen in a Hindi film. The introduction to all the characters is reasonable fun (even if it’s amusing to see two songs stuffed into the proceedings to blatantly provide the producer’s son Jackky with a platform for his dancing skills); the several-minutes-long elopement sequence dramatically turns the tone of the film; there’s a completely unexpected and intriguing twist in the tale in the second half (unexpected if you’ve not seen the original Tamil film Naadodigal on which Rangrezz is based); and then come the two speeches in the last half hour that could have been dubbed laughable if they weren’t dangerous, considering our Indian social reality.

You see, the entire point of Rangrezz is to preach to us that pig-headed parents are completely justified in preventing children from choosing their own life partners because, well, young people are too irresponsible, hormonally driven and sexually obsessed to be taken seriously in such matters. This lesson delivered to us by Jackky’s Rishi is completely at odds with the support he lends to his own sister and her boyfriend … but let not logic come in the way of a solid Bollywood bhaashan.

The sermonising drivel doled out in the end spoils the impact of what is otherwise a rather entertaining film. Jackky may lack screen presence but it’s only fair to say that his acting has been steadily improving since he made his debut with Kal Kissne Dekha four years back. Besides, Bhagnani Senior has had the good sense here not to saddle his son with a solo hero film as he did with KKD and last year’s Ajab Gazabb Love. In Rangrezz, as with 2011’s Faltu, Jackky shares screen space with a bunch of talented co-stars (barring Rajpal Yadav who is painfully repetitive and Lushin Dubey who over-acts) and comes off not-too-badly as a consequence. Sure he gets to strip off his shirt to show off his abs within seconds after the start of the film, and yes Vinu and Pakiya are ignored in the film’s song-and-dance sequences, but we shall grant an indulgent daddy this much. All is forgiven since he had the courage to cast the highly talented Chandan Roy Sanyal as Jackky’s buddy in Faltu, and here he gives us the attractive and charismatic Vijay Verma as Rishi’s hot-headed friend Pakiya and the nicely understated Amitosh Nagpal as the more level-headed Vinu.

Full marks to the film’s editor T.S. Suresh for his handling of the elopement sequence and to singer Sukhwinder for his thumping rendition of Shambho Shiv Shambho during that scene. In the midst of all this praise, it must also be said that director Priyadarshan does not know when to stop if he’s got a good thing going – it’s perfectly acceptable to show a person being injured in a gruesome battle, but what purpose is served by then also showing us close-ups of needle and thread being put to a deep gash on a man’s forehead? Thankfully, these gratuitous moments in Rangrezz are not many. Later in the film, Shambho Shiv Shambho is used again and, not surprisingly, is far less effective than the first time – not only because of over-use but because by then we have already been lectured once about justifications for parental despotism. As for the Gangnam Style video in the end featuring Jackky – it’s a poor revision of Psy’s original that is still notching up millions of hits on youtube.

This review would be incomplete without singling out Rangrezz’s cinematographer Santosh Sivan for capturing rural India in a way that Bollywood rarely does. The film is filled with lovely shots of the countryside, epitomised by one particularly mesmerising tree that spreads out like a protective, gigantic umbrella over our protagonists. Neatly tucked into the film right before its shocking moral-science class is also a very nice point being made to parents about how a child’s choice of marital partner should not be based on caste and class. Odd, is it not, that what follows is absolution for parents who oppose their children’s right to pick a husband or wife?

With much to recommend in it despite its flaws, it’s a crying shame that the ultimate message being sent out by Rangrezz makes it an advertisement for extreme conservatism. I can quite imagine khap panchayats paying big money to Priyadarshan to make versions of this film in other languages. A crying shame indeed!


A woman divorces her physically abusive husband. The man dies shortly afterwards, returning as a spirit to haunt his wife and reclaim their child. That, in a nutshell, is the story of Aatma. Writer-director Suparn Verma’s film begins with the promise of a layered and poignant tale of domestic violence, a self-respecting woman who brooks no abuse and the things human beings do when relationships sour. This is the direction the film takes in the first half, while steering clear of most Bollywood ghost story clichés. Yes, the background score is actually not screechy, there’s barely any blood, and no one, but no one, flies in the air. 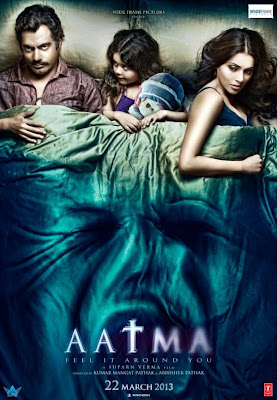 Sadly, predictability sets in in the second half. After a while you can tell from a mile who the spook will target next. By the time the climax (or rather, anti-climax) comes around, it’s clear the screenplay has failed to move beyond the potential of the original concept. As things stand, there are elements worth strongly recommending in Aatma, but they simply do not all add up.

Element No. 1: Bipasha Basu is in fine form here as Maya Verma, a woman who takes a broken marriage in her stride but begins to unravel at the prospect of the loss of her child. It’s also a pleasant change to see Bipasha in a film that presents her as a natural beauty with minimal makeup and without the aid of killer gowns or bikinis, just as any great-looking female professional might be. Doyel Dhawan is charming as little Niya and impresses with her acting skills, especially in the scene in which she sees her father’s true colours.

However, it’s a crime to cast Nawazuddin Siddiqui in a film and then give him the most poorly written part of the lot. Siddiqui plays Maya’s dead husband Abhay. What were this man’s motivations? What prompted those fits of rage and the depth of hatred for his wife? We never get to know. Still, we do get glimpses of Siddiqui’s phenomenal talent in a spooky scene involving a bathroom and a schoolteacher, and elsewhere, in the only scene that gives him the canvas he deserves, when the judge awards custody of Niya to Maya causing Abhay to explode with rage. Another actor who gets shortchanged by the writing is the wonderful Jaideep Ahlawat as a policeman investigating a string of crimes, all of them with links to Niya.

There are several points where it seems like Aatma may head in an interesting direction, but then the writer holds back. There’s a neatly executed scene in which Ahlawat’s policeman has a dream which seems to suggest that he’s getting far more involved in the case than he should be. Where did that come from? What happens thereafter? No answers. Elsewhere, Maya is told that the only way Abhay will manage to take Niya away from her is if a wedge is driven between her and the child. Why is that not carried forward? Again, no answers.

Where you can’t fault Aatma is in the departments of cinematography and production design which lend an unrelentingly eerie atmosphere to the film even when the story goes downhill. Sophie Winqvist’s camera seems to stand beside the ghost at some points observing his prey, and sometimes next to us observing them all. Sometimes it goes to floor level watching a woman walk to her death, sometimes it peers down from the balcony of a high-rise building, sometimes it watches the backs of the characters through most of a scene, sometimes it is far, sometimes it is close, and always always it’s lovely. Production designer Sukant Panigrahy complements Winqvist’s work with colours and disturbing settings that seem born to host a ghost.

The effect is particularly striking in Aatma’s two most frightening and most well-conceived scenes: one involving that aforementioned bathroom and schoolteacher, the other featuring a Hindu priest. There are other scarey moments in the film, but since they’re mostly concentrated in the first half, the impact peters out post-interval.

In the end, Aatma simply leaves you with a sense of what might have been. It might have been that much-needed Bollywood film about spousal abuse and the challenges an assertive woman faces in today’s world; it might have been the story of what loneliness and loss can do to a little child; it might have been about the pain that divorce visits on a child and the politics an evil parent can play; it might have taken us into the mind of a violent husband. The ghost could have been a metaphor here for the horrors in an ailing marriage. The supernatural angle could have been just a clever device to tell a larger story about relationships, the way Reema Kagti’s recent Talaash used the genre to show us a marriage torn apart by the trauma of the death of a child while simultaneously discussing society’s indifference to those who live on its margins.

Could have been… Might have been… Is not… Despite a good start and some truly alluring individual elements, Aatma disappoints.