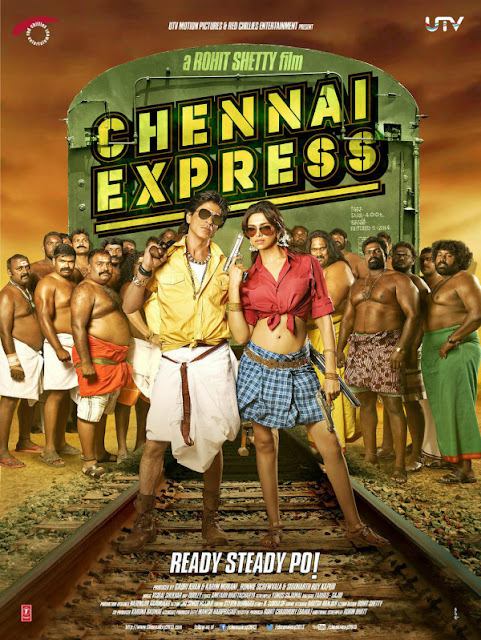 The first half hour of Chennai Express is rollicking good fun: the lines are quick-witted, Shah Rukh Khan’s comic timing is a revelation (didn’t know he had it in him! he should do more comedies!), Deepika Padukone’s thick Tamilian accent is hilarious (if only we can relax and not get our knickers in a twist about it) plus we get a neat little parody of the climactic scene in Dilwale Dulhania Le Jayenge that deserves, in fact, to be mocked. After that though, it’s a series of troughs and crests and crests and troughs – in fact, too many troughs – culminating in an overly long finale fight and the inexplicable Lungi Dance. Overall assessment though: if you’re in a mood for some determinedly nonsensical entertainment that’s not entirely as over-the-top as we’re used to seeing from director Rohit Shetty, this one’s it.

SRK takes on his favourite screen name once again in Chennai Express in which he plays the 40-year-old grandson of an over-protective North Indian halwai (Lekh Tandon) in Mumbai. When the old man passes away, Rahul heads off to Goa for a holiday but is diverted to Tamil Nadu’s Komban village when he gets unwittingly embroiled in the business of Meenamma (Deepika), the beautiful daughter of a Tamilian don (Sathyaraj). The question many have been asking since the film’s first trailer was released is this: is Chennai Express a return to the irritating old Bollywood stereotype of the oily-haired aiyyaiyyo south Indian epitomised by Mehmood in Padosan and repeated ad nauseam in Hindi films till the end of the 1980s? The answer, with a few caveats, is a surprising no. Yes, there’s a pointed contrast made between the skin colour of the film’s southern Indian lead players and their emphatically black-skinned flunkeys, but to be fair, Bollywood’s portrayal of north Indians is not very different, with a lighter skin usually conveying a higher status. It’s noteworthy though that Chennai Express sends out a gentle message to north Indians who by and large consider it every Indian’s duty to speak Hindi while making no effort themselves to learn other Indian languages. It does so by doggedly not subtitling its lengthy Tamil dialogues, choosing instead to get translations from Meenamma or a Tamil-speaking Sikh policeman played sweetly by Mukesh Tiwari, and on other occasions leaving the audience to guess what’s probably being said.
Most interestingly, SRK spends much of the film in a self-deprecating mood, being the anti-thesis of the Hindi film hero, openly showing his fear of the bad guys, with the camerawork intentionally stressing his smallness in comparison with the towering presence of the villain Thangabali played by Nikitin Dheer. He gets a drubbing from Thangabali at one point. Elsewhere, he seeks Meenamma’s protection though of course he won’t admit it. And in one scene, the lady even gets to kick him real hard for reasons we won’t reveal. How often does a Hindi film hero do this? Kudos then to Shah Rukh for risking it, especially considering the prevailing on-screen invincibility of his arch rival Salman Khan who remains capable of taking on crowds, trains and trams with his bare fists. Rahul even – hold your breath! – announces his age as 40 in the very first line he utters in the film, and Meenamma tells him he looks 50-plus. Considering that at 47-going-on-48 SRK played a 25-year-old boy in the first half of last year’s Jab Tak Hai Jaan, this comes as a relief. Gentlemen of Bollywood, when you star in a film with a heroine half your age, kindly admit that it’s an older-man-younger-woman romance.
The other significant point is Chennai Express’ take on DDLJ, the film that catapulted SRK from stardom to stratospheric megastardom. DDLJ romanticised its regressive message about the unquestionable will of the family patriarch and a woman’s lack of say in personal matters. Twenty years later, SRK returns as another Rahul, this time not to succumb but to question a father for being despotic with his daughter. The men are still the ones doing the talking, but the nature of the conversation has changed, and that’s a small milestone to celebrate.

If the preceding paragraph suggests in any way that Meenamma is a pushover or Deepika’s role is subordinate to Shah Rukh’s in this film, you’ve read that wrong. Meenamma is a woman who strains at her chains every step of the way. And Deepika sustains her comic timing from start to finish in Chennai Express even when SRK’s Rahul gets repetitive in the second half. After the emotional roller-coaster she pulled off in Yeh Jawaani Hai Deewani, here’s another thumbs up for Ms Padukone, this time in a vastly different role. SRK lives up to his promise – made in a beverage ad – that from this film forward his heroine’s name would appear before his in the credits, which as we all know is a break from MCP Bollywood’s norm. Now that’s a condescending piece of tosh if your heroine is playing fifth fiddle to you as is the case with most Hindi films (and certainly Rohit Shetty’s own last two, Bol Bachchan and Singham), but in Chennai Express Deepika is an equal partner to her hero, as she has been in most of her films so far. Hopefully a day is not far when a leading lady does not have to depend on a leading man’s largesse to have her name placed in the credits where it should rightfully be. Until then, here’s another small milestone to celebrate.

It’s because of how Chennai Express chooses to portray south Indians and its heroine until that point that the Lungi Dance in the end is so jarring. First, it relegates Deepika completely to the position of junior partner when it starts off with the announcement, “This is the tribute to Thalaivar from King Khan…” Second, the so-called “tribute” to Rajinikanth continues to reduce this Tamil film icon to mere exotica, which is how North India has deigned to recognise him ever since the North India-centric, supposedly “national” media accidentally woke up to his legend status with the release of Sivaji. As a comical song-and-dance somewhere in the middle of this film, Lungi Dance might have been enjoyable. Placed at the end with the credits, with absolutely no connection to anything that’s gone before, and positioned as a bow to Rajini, it’s reductive and makes absolutely no sense. Though some people north of the Vindhyas may find this hard to believe, there’s ACTUALLY more to Rajinikanth than his sunglass-flipping and other stunts. 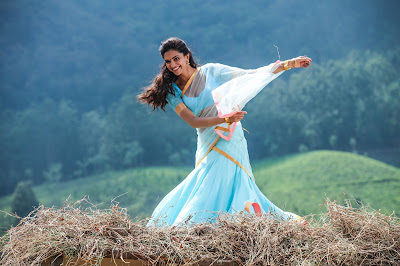 Clearly then, Chennai Express is not an entirely smooth ride. Never mind the ideological analysis… Purely from an entertainment point of view, the film slows down too much in the second half. Some things remain consistent though: DoP Dudley does a good job of capturing the film’s uniformly picturesque locations; production designer Narendra Rahurikar creates prettiness without colour coordinating wall paint with the clothes worn by people standing against those walls as we’ve seen in too many films of the past decade; and the costume design team clothes Deepika in the loveliest southern Indian saris and half-saris while dressing the rest of the cast impeccably too, sans the loudness we’ve come to associate with Rohit Shetty’s films. The music, on the other hand, is mostly lousy – except for the extremely catchy Chennaiaiaiaiai Chennai Express theme and the reasonably melodic Titli, This comes as a huge disappointment considering Vishal-Shekhar’s amazing track record. National Award-winning Tamil and Malayalam actress Priyamani looks lovely in her item song appearance but must bear the brunt of the tunelessness of the number to which she is dancing. South India knows her well; Bollywood saw the impact she makes even in a supporting role when she played Abhishek Bachchan’s sister in Raavan… for god’s sake, she deserves better than this.

When you weigh out the film’s assets and liabilities though, there’s more to like than not. Too many Bollywood comedies in recent years have come laden with “jokes” about rape, faeces and farts, urine and sundry body fluids. Chennai Express steers clear of crudeness except for a couple of un-funny comments about izzat lootna, one tacky wisecrack about “chhakkaas” and a few-seconds-long distasteful reference to Shah Rukh’s most sensitive film so far (“My name is Rahul and I’m not a terrorist,” says the hero here, rolling his eyes as if autism is amusing). Chennai Express is partly designed as a bow to SRK (I lost count of the number of times in the film he stretches out his arms in that trademark gesture) but in a fashion that’s less in-your-face than the grating Salman-worship we’ve lately been seeing in the other Khan’s films.

One thing’s for sure: this film is not as mindless as it would like us to think it is. Anyway, kee farak painda? For as Meenamma might say in that infectious accent of hers, “Main ab review khatam karti, tum review padhti, phir tum film dekhti aur khud decide karti ki tum film like karti ya hate karti.” Chennai Express is not unrelentingly laugh-worthy, but it’s still good enough for a relaxed, pleasant evening. Happy Eid, folks!