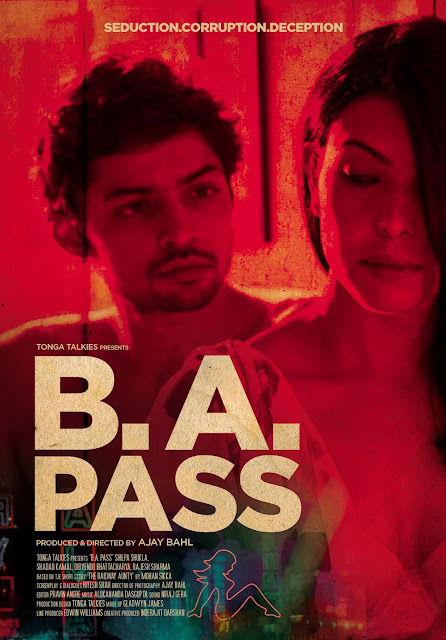 The responsibility for two young sisters is prematurely placed on the shoulders of Mukesh (Shadab Kamal), a college student. The girls are sent off to a shady hostel by the extended family while he stays with his reluctant aunt in Delhi’s Paharganj as a paying guest. As he struggles to figure out a way to get his sisters back with him, the aunt pushes him in the direction of her husband’s boss’ wife Sarika (Shilpa Shukla). The boy’s life goes into a spiral of sexual exploitation when Sarika Aunty first seduces him and then coaxes him into prostitution while she plays pimp.

Based on the short story The Railway Aunty by Mohan Sikka, B.A. Pass is both frank and bold by Hindi film standards. This is not just an innocent Summer of 42. In his directorial debut, Ajay Bahl presents to us a Delhi of disturbing contrasts – middle-class and wealthy women seeking relief in the arms of a gigolo away from their unhappy marriages, while the boy copes with a desperate need for money and an evident desire to be with this older woman who has inexplicably enslaved him. Thrown in is an unlikely friendship between Mukesh and the grubby grave-digger Johnny (Dibyendu Bhattacharya) developed over many games of chess, and a heart-warming scene with Deepti Naval in a cameo. In one of its most nerve-wracking portions, the film also makes a rare allusion to the rape of men, a subject almost never discussed in the Indian news or entertainment media.

Bahl, who has also handled the cinematography for B.A. Pass, captures a city of always-ominous neon-lit nights while the days have a guarded air about them. His camera rarely gives us wide, expansive shots of the Capital, instead closely shadowing the characters, thus adding a sense of foreboding to the proceedings while also lending an air of mystery to those seemingly respectable homes where curtains and doors camouflage more than you might guess. When it does pull away, it does so with dramatic effect, providing a very brief glimpse of Red Fort at one point and elsewhere fixing a lingering gaze on a desolate child – for that is what he is – on a Metro train.

The unbridled camerawork however must contend with a storyline and lead actors who seem to be holding something back. One can feel the world closing in on Mukesh as his means of income are unexpectedly cut off and he repeatedly fields calls from his miserable sisters, but actor Shadab Kamal seems not to have the range to carry an entire film on his shoulders. He has a beguilingly innocent face which is all that’s needed in that first seduction scene with Sarika. But when that look of bewilderment persists in every single sexual encounter he has with her, you’ve got to wonder precisely why he keeps coming back. Is he hooked to the sex? Well, the pleasure doesn’t show. Is he in love with her? Well, the affection doesn’t show.

And what of Shilpa Shukla who delivered a note-worthy performance as the troublesome hockey player Bindiya in Chak De India? Certainly she has a great body and is far more uninhibited in the bedroom than most Indian actors, but not quite uninhibited enough. Considering the number of sex scenes in the film, after a while a repetitiveness sets in, either because she draws a line or our film Censors do. Show your audience a hint of a bare shoulder if a topless heroine won’t get past the Censors but c’mon, don’t have us wondering why she keeps her lingerie on at all times while making love.

That a Hindi film would serve us an unapologetically aggressive, sado-masochistic, sexually predatory leading lady is an unusual turn of events. That the sex scenes don’t look sleazy at any point is another positive. Shilpa, however, lends no nuances to her performance and shows us no flicker of any other dimension to her character, not even in one chillingly brutal scene with her husband, played by the ever-wonderful, always-effective Rajesh Sharma in a brief role.

In many ways, B.A. Pass is a pathbreaking Hindi film. It presents to us aspects of sexual exploitation rarely visited by Hindi cinema. But the promising build-up of the first half is not matched by the denouement. Sarika’s fate in the climax seems contrived, as are Johnny’s actions in the end which seem completely out of character. This is an uncommon film done in by a hesitation to go the whole nine yards. Still, the atmospherics are terrific, and for that it’s worth a watch.