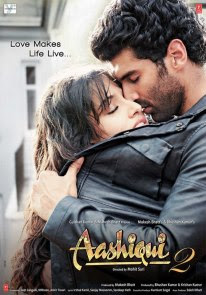 A hero with a sharp, pointy nose... A heroine with a sweet face... A hero who’s a tall, strapping fellow... A heroine whose complexion glows with youth... Individually Shraddha Kapoor and Aditya Roy Kapoor are attractive enough. Together though, they face a grave problem: there’s zero chemistry between them. The fundamental issue with Aashiqui 2 is that the leads look like a doting little girl and her fond elder brother, NOT a couple desperately in love. The Internet tells me Aditya is 27 and Shraddha is 24. The real-life age difference of merely three years is irrelevant though because Shraddha looks like a kid in her mid-teens whereas Aditya has the face, body and demeanour of a full-grown man. Watching her swear undying devotion to this adult human male somehow brings back memories of that asexual kiss SRK planted on Deepika’s forehead in Om Shanti Om…another fond elder brother…though he, of course, was dealing with a self-imposed hurdle: Deepika is 21 years his junior.

It does not help that the actors in Aashiqui 2 seem to have been instructed to be as languid as possible in their performances, perhaps as an ode to Rahul Roy and Anu Agarwal, stars of the 1990 film Aashiqui directed by Mahesh Bhatt (his brother Mukesh is one of the producers of Aashiqui 2). The languorous style made sense back then because Roy and Agarwal didn’t have an acting bone in their bodies and this was the best way to camouflage their inability to emote. Aditya on the other hand has already shown a little bit of potential in Action Replay (though Guzaarish proved that the potential requires a firm directorial hand) and Shraddha has given us ample proof of her innate talent in her first film as heroine, Luv ka the End. Disappointingly then, their studied lifelessness in Aashiqui 2 is ultimately what makes this film a very sluggish affair to not remember.

This is not the kind of film you would expect from director Mohit Suri whose last venture was the highly entertaining Emraan Hashmi-Prashant Narayanan-Jacqueline Fernandez-starrer Murder 2 in 2011. Whatever the flaws may have been in Suri’s previous films, a deliberate lack of energy has not been one of them. It seems that like the entire team of Aashiqui 2, he too is labouring under illusions about the greatness and legacy of the old Aashiqui. Let’s face it: that film was no Mughal-e-Azam. It was a boring film with a boring hero and heroine who got lucky at the box office because of Nadeem-Shravan’s memorable soundtrack filled with melodious numbers that were a refreshing contrast to the noise reigning through Bollywood in the 1980s. So the referencing of Aashiqui in Aashiqui 2 comes across as inexplicable since the earlier film is not a classic. The shot of a girl and boy with their heads under a jacket was on the poster of Aashiqui. Yeah yeah we remember it, but that does not make it iconic.  Replicating it in Aashiqui 2 then kind of seems silly. The songs in this new film are not bad at all, but since the past two decades have been good for Hindi film music, they’re not dramatically striking either.

Here in a nutshell is the story of Aashiqui 2: Rahul Jaykar (Aditya) is a major pop star whose alcoholism is ruining his career. One night after a drunken brawl at one of his concerts, he spots Aarohi Keshav Shirke (Shraddha) singing one of his compositions at a beer bar in Goa. Struck by her amazing voice, he decides to mentor her and give her the career he’s no longer interested in having for himself. Some misunderstandings follow. Then the misunderstandings are sorted out. Then they work together. Then she becomes a star. Then he struggles with his love for the bottle. Then she stands by him. Then this. Then that. Then a yawn here. Then a yawn there. It’s dull dull dull.

Since I’m indulging in so much wishful thinking here, I may as well add: this could have been a film. It’s not. What it is is a schoolboyish collation of randomly selected scenes through 140 minutes that feel like three hours. The editor and director seem to have lost interest in Aashiqui 2 somewhere in the first scene. No idea why they stuck around. 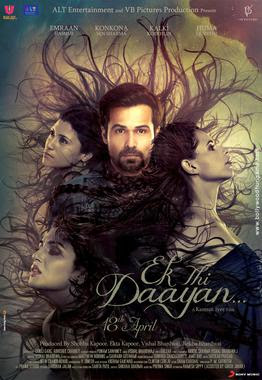 A supernatural thriller that spells out a completely logical explanation in black and white in its climax could be a bore. There are two other ways a film in the genre could work: either it could go all out and stubbornly refuse to offer or even suggest a rational clarification for the goings-on on screen; or it could leave enough room for us to read a logical explanation into the proceedings ourselves if we so choose. Full marks to debutant director Kannan Iyer for managing an uncommon blend of both in the pre-interval portion of Ek Thi Daayan. That he completely shuts out the possibility of a rationale in the last 15 minutes or so prevents this film from being as good as it could have been… but in the overall analysis, Ek Thi Daayan still has more scares and atmospherics than we’ve been getting in recent years from the cliché-ridden exponents of the horror/paranormal genre in Bollywood.

Daayan starts off with magician Bobo The Baffler on stage dazzling his audience. You’d think any kid christened Bobo by his parents is bound to be haunted by the name all his life. This Bobo is haunted instead by other things. He is tortured by childhood memories of a little sister and father he believes were killed by a witch.  Now as an adult, he is planning to adopt a child with his fiancé Tamara when those memories become more pronounced. Is he suffering from mental illness or do witches really exist? Was he simply a child with a fertile imagination or did he really see what we saw him see?  Questions… Questions… Questions…

The loveliest part of Ek Thi Daayan is the relationship between Bobo, his sister and widowed father. There is a particularly moving yet simple early scene in which the little girl matter-of-factly explains to her incredulous dad that she and Bobo took an elevator to hell which lies right beneath their building – the warmth and ease in their interaction is endearing beyond words. Of course, you tell yourself, when romance enters the father’s life it’s bound to cause some insecurity and jealousy in the children. It is these possibilities that keep the film intriguing and enjoyable for the most part despite an inconsistent screenplay.

There are some niggling issues at the start though the first half of the film is written much better than the second half. For instance, I’d imagine a father who is so considerate towards his children would be a little more careful about the manner in which they discover his blossoming relationship with a new woman – this dad is not, nor does he make an iota of an effort to soften the blow when Bobo realises that he’s sleeping with the lady. Second, it grates the senses when details are treated lightly. Bobo’s opening act on stage has been shot at Kingdom of Dreams (KoD), a  glitzy world-class entertainment destination in Delhi’s suburbs; the venue is even identified as KoD; but for some inexplicable reason a dialogue that follows seconds later suggests that the place is in Mumbai. No idea why.

The stars of the film are its cinematography, art direction and low-key background score that conjure up an eerie sense of foreboding from Scene 1 minus any of the usual Bollywood horror film clichés of flying banshees, gore, white flowy garments, tantriks, padres, pandits or screeching sounds. Emraan Hashmi and child actor Vishesh Tiwari are amazingly consistent as the deeply disturbed Bobo of the present and the past.  Tiwari was part of the Chillar Party cast that won 2012’s National Award for Best Child Artiste. This film is proof that Chillar was no flash in the pan for him. Equally remarkable is the little girl who plays Bobo’s sister. Huma Qureshi as Bobo’s fiancé Tamara does not get a role as well-fleshed-out as she did in Gangs of Wasseypur 1&2 but she’s interesting all the same.

I have always loved Pavan Malhotra and Konkona Sen Sharma’s performances, but in that scene in which Bobo’s father (Malhotra) first begins to eye Diana (Sharma), he appears more lecherous than charmed. Sharma herself rolls her eyes in too exaggerated a fashion in at least a few places. On the other hand, there is Kalki Koechlin – the third female lead – displaying that natural ease before the camera that made her such a striking presence in Dev D. Her recent performances have tended to be one-toned but here, as she plays fast and loose with the audience (is she too a witch? is she not?) she reminds us of why she held out so much promise in her first film. I also love the way the director exploits her innocent smile and eyes to further the psychological games he is playing with us.

Now if only the screenplay hadn’t lost its way in the denouement, if only it hadn’t turned so ordinarily literal and hence silly right at the end, this could have been a very nice film.As things stands, it’s not  bad at all.  Hope to see you again soon, Kannan Iyer.