But most of all, may I shake your hand, Mr Farhan Akhtar?! 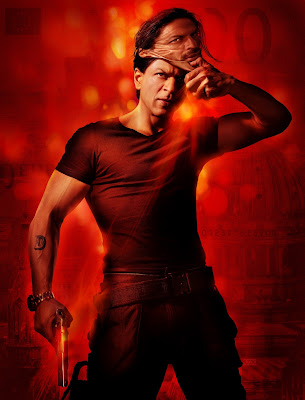 The allure of the 1978 Don starring Amitabh Bachchan came from its memorable dialogues, stylish action, clever script, iconic casting and fabulous music score. Farhan’s Don in 2006 was not just a remake, it was an interesting re-interpretation. It retained the original’s sleekness, borrowed just the right amount from its forebear to captivate fans from back then, but turned the tall, strapping, grave Don played by Bachchansaab into the humorous and impertinent, self-deprecating yet arrogant, physically less imposing Don of Shah Rukh Khan. There was no space for comparisons between the two because they were so completely different.
In Don 2, SRK takes the self-effacing tone forward, and the sparks between his Don and Priyanka Chopra’s Roma turn to a raging blaze. Farhan steers his stars with a firm hand and uses Shankar Ehsaan Loy’s haunting music minimally but to excellent effect to give us a thumpingly enjoyable film that looks as technically polished as any high-budget international product.
Let’s take that step by step. For at least a year now, it has seemed as though Shah Rukh (like a couple of his fellow Bollywood heroes in their 40s) was struggling to come to terms with his age. The hero’s wannabe-boyish styling in that embarrassingly bad film Ra.One, simply reinforced the feeling. In Don2, however, he plays a part suited to his age, seems not to camouflage the years and comes off looking better for it. Seriously, Shah Rukh, please keep that beard!
It helps that SRK’s heroine in Don 2 is Priyanka Chopra. PC is 17 years younger than her man, but she does not come across looking like an adoring younger sister to Shah Rukh’s indulgent big brother figure, unlike Deepika Padukone in Om Shanti Om and Anushka Sharma in Rab Ne Bana Di Jodi (both girls over 20 years his junior). Sure, Priyanka and Shah Rukh look like a much younger woman and an older man in love/lust, but the point is you can feel the magnetic pull between them, you can imagine Roma and Don barely able to keep out of each other’s beds!
There’s also the matter of Shah Rukh’s acting. In film after film he’s played to the gallery, emphasising the histrionic eccentricities and exaggerated mannerisms that his fans seem to love. But Chak De, Swades and My Name Is Khan showed us that the star is also an actor. Don and Don 2 are interesting because he’s taken those very quirks his fans enjoy and – under Farhan’s able guidance – turned them into qualities intrinsic to the character of Don.
And able guidance it is! No actor is better than his director, and Farhan is among Bollywood’s best right now. He knows how to put together a great team too, among whom Don 2’s cinematographer Jason West, choreographer Vaibhavi Merchant and production designer T.P. Abid all need a special mention. I particularly loved the shadow play on that gorgeous stage in the film’s title track and the very sexual interplay between the lead pair in the final song.
Thankfully, though the film is primarily a platform for Shah Rukh, Farhan treats his female star with respect. Through the first half, I was worried that Priyanka’s Roma would end up being little more than a glamorous showpiece like heroines often are in today’s Bollywood. But post-interval, Roma’s significance shoots up … and though I don’t want to expand on that, may I just say that Ms Chopra – one of the best that we have in commercial Hindi cinema right now – is probably one of the fittest women in India, her Roma is a far cry from those helpless “mujhe bachao”-type bechaaris of an earlier Bollywood, and she looks torrid beating up bad men!
Truth be told, Don 1 had a more fleshy story. But well, films in this genre are not so much about story as about adrenaline. All you need to know about this one is that Don tries to rob a bank in Europe with his bête noir from the earlier film, Vardhaan (Boman Irani), and a young computer genius Sameer (Kunal Kapoor), while cops Malik (Om Puri) and Roma get unwittingly drawn in.
The film does have some major flaws, but I found myself in a forgiving mood by the time the climax came around. First, although the action in the first half is thrilling, Don 2 dips considerably in the early part of the post-interval portion before picking up again and racing to an unexpected ending. There’s a particularly boring step-by-step explanation of Don’s bank robbery plan. Some of Don’s ruses seem too simplistic, especially for those fed a diet of MIs, Die Hards and Bonds! Likewise, Sameer’s ability to hack into the bank’s security system is too convenient and unconvincing. At the start of the heist, the bank’s security staff seem surprisingly lax! There are portions in the film that are confusing even in retrospect. And the interesting guest appearance by a major star is marred by one problem: if I wear a mask that makes me look like you, does that mean I’ll get your voice too? I can’t explain further without spoiling your fun! And in the overall analysis, that’s what Don 2 is – it’s wicked, unapologetic fun!
Rating (out of five): ***1/2
Footnote: I saw the film’s 2D version at a press preview. Will report back if I watch it in 3D.
Photograph courtesy: https://www.facebook.com/#!/Don2thefilm
Posted by Anna MM Vetticad at 3:51 AM