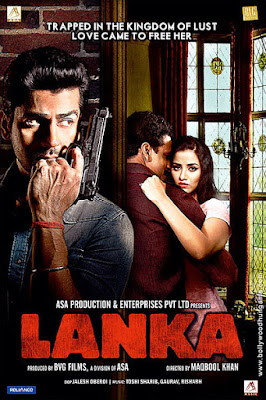 Good intentions don’t make good movies – that may sound like a cliché, but it’s true enough to merit repetition. Lanka is a modern-day interpretation of the Raavan-Vibhishan relationship in the Ramayan. It’s also meant to be an indictment of small-town goons who harass and torture women in the badlands where they are a law unto themselves and the law of the land is often irrelevant. But in the absence of a spark, a hard-hitting narrative style and a female protagonist with any degree of charisma, it remains nothing more than a well-meaning film.
Lanka opens in a city hospital where Dr Anju Khanna attacks the husband of a patient who’s come in with injuries that seem like the result of domestic violence. We discover that the good doc has done this before. Ah, so she has been a victim of wife/girlfriend beating, I assume. But as Dr Khanna settles down to write her life story in a bid to exorcise the ghosts of her past, it turns out to be something else.
When Anju’s father was posted in Uttar Pradesh’s Bijnor at some point previously, she had been forced into a sexual relationship with the town’s biggest political goonda, Yashwant Sisodia (Manoj Bajpayee). So obsessed was he with her, that he had his henchmen constantly watching the Khanna residence and the family’s every move outside those four walls, thus making escape impossible. With the local police in Sisodia’s pocket, complaining was not an option for the hapless Khannas.
Hmm … interesting. Coming as Lanka does just a few months after Tigmanshu Dhulia’s Sahib Biwi aur Gangster – a stinging tale of politics and violence in the interiors – I was looking forward to another revelatory film. But Lanka is done in by its tepid feel, lacklustre direction and ineffective casting. It’s not that I don’t believe it’s possible for a powerful man to keep a woman captive in a bustling town; it’s not that I don’t believe real-life terror-struck characters without zest or spirit like Anju Khanna could exist. It’s just that Tia Bajpai playing Anju is so lifeless, and has such an uninspiring screen presence, that I was unconvinced that a maverick like Sisodia would be obsessed with such a girl. Even harder to believe was that his sidekick (Arjan Bajwa) would risk his life, his relationship with Sisodia and his career over this unappealing, charmless, wimpish woman.
This is an absolute pity because Lanka has a lot going for it. Bajpayee has in recent years hammed his way through too many films, but here he lends just the right amount of menace and leeriness to his character to induce revulsion in an audience. Bajwa – who is best known for playing Priyanka Chopra’s boyfriend in Fashion – is a handsome fellow and a good actor. The brotherly relationship between him and Bajpayee is also interesting in a Hindi film industry that has in the past tended to paint its characters as black or white, rarely gray. In fact, the allusion to Raavan and Vibhishan in their equation is interestingly played out because Bajpayee’s Sisodia/Raavan is projected as a monster yet with a gentle side. The film also boasts of some interesting, wolf-whistle-worthy dialoguebaazi. But stringing together these individual blooms is the job of an efficient director, and unfortunately Maqbool Khan’s work is inconsistent – he manages some scenes of high tension rather well, but falls flat elsewhere especially in the unimpactful climax. He also gives the film an unnecessarily dull pace. Add to that the half-baked explanation for why Sisodia did not marry the woman he claimed to be hopelessly, helplessly taken in by; and supplement that with the fact that … I have to say it once again … Tia Bajpai left me completely cold … and you know why Lanka is an opportunity lost!
Rating (out of five): *1/2
CBFC Rating:                       A
Language:                             Hindi