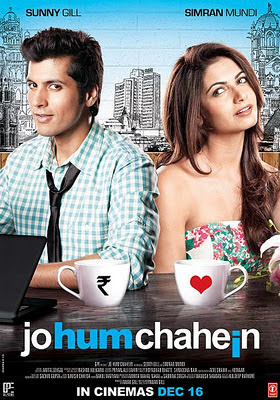 I can see why Jo Hum Chahein’s director Pawan Gill thought his hero Sunny Gill might make it in Bollywood. After all, he’s got a pretty face, he’s tall and trim, and he possesses that quality that most people in our country crave: he’s gora.
But charisma goes beyond that and unfortunately Master Gill does not have it … at least not right now. He’s also got an inexplicable style of dialogue delivery which at times leads to an apparent mismatch between his lip movements and the words emerging from those lips. At first I thought there was an audio sync-out due to some technical issue in the hall where I watched this film, but when I found no audio-video variance while other characters were speaking, I had to conclude that the problem lay with the actor. To make matters worse for this youngster, his debut film is absolutely lacklustre, filled with heavy-handed trite dialogues and clichéd characters, and is boringly predictable.
The story is simple. Gill plays Rohan Bhatia, an MBA determined to make crores while his Daddy wants him to join the defence services. Saying no to being a sainik?!!! I guess that’s Hindi filmdom’s ultimate way of labelling a person a selfish, self-centred “type”. Rohan chooses the stockbroking profession not based on his passions but based on how much cash he’s likely to earn from it. On Day 1 he’s singled out by the star of his firm, Vikram Khurana (Alyy Khan), who takes him under his wing and introduces him to a huge potential client, millionairess Amrita Singhania (Achint Kaur). The lady is another “type” – rich bored single female, unabashed cougar, essentially lonely despite the bustling social life. She’s obviously determined to bed Rohan from the moment she sees him, but it’s not clear whether he is oblivious to her intentions or is playing along while pretending not to realise what’s on her mind. All I know is that Rohan sleeps with her twice but seems not to know how it happened. The look on his face when he wakes up both times is of such incredulity that I thought the film would later reveal that Amrita had drugged him into submission.
Anyway, on a parallel track, Rohan has fallen in love with aspiring actress Neha (former Miss India Universe Simran Mundi) and had a few rolls in the hay with her too. Now figure out for yourself how the rest of the film will pan out. It’s easy!
On the bright side, Mundi is tall, has a lithe figure and in one song shot among rocks and by a water body, wears some of the loveliest dresses given to a Hindi film actress in recent times. Achint Kaur has a fabulous body … which gym do you work out at, lady?!!! Plus ...
Okay, I can’t think of any other pluses! Mundi needs acting lessons, Alyy Khan always did. With songs like “Aaj bhi party, kal bhi party / Saari duniya hai ek party / Ta na na na na / Ta na na na na,” music director Sachin Gupta seems to be trying to re-create the same youthful mood that Sachin-Jigar ushered in with their songs for Faltu earlier this year. But Faltu – despite all its flaws – had an undeniable sense of humour and a significant point to make. Jo Hum Chahein is just one big cliché! If you don’t believe me, hear these lines that Neha utters to a weepy Rohan towards the end of the film, give or take a word here or there: “Hum dono ek doosre ke andhere aakaash ko … roshan kar sakte hai. Let’s be each other’s fireworks.” I did not make that up!!!
Rating (out of five): 1/4 (this quarter star for Simran’s wardrobe in that song, and the no-fuss manner in which Achint Kaur casually takes off her robe to reveal a toned body in a white bikini!)
CBFC Rating:                       U/A
Language:                              Hindi
Photograph courtesy: http://en.wikipedia.org/wiki/Jo_Hum_Chahein
Posted by Anna MM Vetticad at 2:06 PM