There’s a lot that’s nice and pleasant about this quiet film revolving around two warring neighbours who become reluctant flatmates and then friends. Neha Dhupia stars as Mehek, a dancer in Mumbai whose partying ways infuriate her strait-laced padosi Vidyadhar (Vinay Pathak). Through their squabbles and trials, you guess how their relationship will turn out, but there’s something refreshing about the treatment that steers clear of passing judgement on either character and does not indulge in most of the stereotypes you would expect in such a storyline. 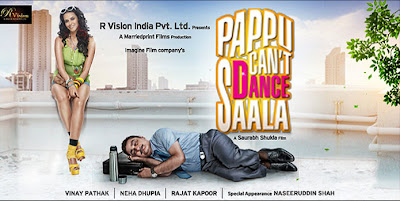 He is from Benaras, and fights every tiny injustice meted out to him in the big city. She is a struggler from Kolhapur on the verge of stardom, who must contend with a casting couch and a seemingly cold mentor. Director Saurabh Shukla takes his time letting the story unfold, at a velocity that suits it well. The film also has a sense of humour that surfaces occasionally and unexpectedly, cresting at the point where Vidya ticks off Mehek’s boss for being hard on her when she’s going through “menstruation”. Individually, Dhupia and Pathak play out their parts just right. What primarily fails the film though is the lack of sparks between the two actors. They look like there could be a warm friendship between them, but nothing beyond that.
The whole point of an unlikely pairing is for the storyteller and stars to convince us that something more could be brewing between the couple in question … the problem with Pappu Can’t Dance Saala though is that I just could not see it happening between those two! Some of this might have to do with the casting and acting, but some of it also has to do with what felt to me like contrived aggression between Vidya and Mehek at the start (especially her unreasonable belligerence towards him), designed simply to get the plot going.
Also, considering that the female protagonist is supposed to be an ace dancer, the film’s music and choreography are a complete let down, deadening the pace each time a song comes around ... and unfortunately, there are too many of those.
Still, I can’t write off Pappu Can’t Dance Saala because it is clearly written by a person who understands this milieu and the struggles of outsiders in a metropolis. It also unobtrusively makes a point about who gets to decide the definition of art, and how hypocritical society is in its attitude towards pop culture. As Palash the choreographer, Rajat Kapoor manages an interesting blend of indifference and affection towards his protégé Mehek. And tucked away in a corner when you are least expecting it, is a neat little guest appearance by Naseeruddin Shah. So yes, there’s something about Pappu Can’t Dance Saala … I wish though it could have been something more!
Rating (out of five): **
CBFC Rating:                       U/A
Language:                             Hindi