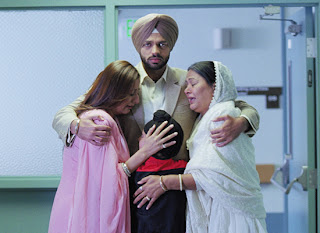 There was a point in the first half of this film when I thought that my review would be spent slamming it for its blatant incitement of violence. But as the story progressed, I Am Singh got so ludicrous that I don’t think I’ll dignify it by bothering to be concerned about its jingoism.
This film is meant to be a tribute to Sikh valour, and a stinging indictment of the US for its treatment of Sikhs and other Asian minorities in the aftermath of 9/11. What it ends up being though is a stereotypical portrayal of Sikhs as a violent, violence-prone community. Worse, though it seems intended as a grave political and social treatise, it does not even take itself seriously! And so, after lives have been lost and much blood has been spilled through its 2 hours-plus running time, we’re thrown right into a completely unrelated, bouncy item song by Mika in the end. Huh? 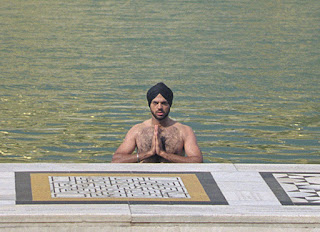 But the acme of ridiculousness is achieved much earlier in the film when our strapping hero Ranveer Singh is shown taking a dip in the sarovar at the Golden Temple in Amritsar. He is mentally resolving to avenge the attacks on his brothers and father, but I found myself giggling helplessly through that scene – because it’s not designed to inspire gravitas in viewers but admiration for actor Gulzar Inder Chahal’s remarkable physique! And so … he raises his muscular arms out of the water … then rises Bo Derek-like … his wet loin cloth clinging to his impressive frame … while he extends those well-worked-out legs to stride towards the camera.
Now tell me Mr Issar, how are we expected to focus on the issues at hand when you present us with such amusement right in their midst?! But the laughability goes way beyond that! The white extras are so bad that they make the film good. The film has no normal, human dialogues – only speeches! Though Issar himself plays an LAPD member who cautions the film’s young players not to indulge in violence, I Am Singh still comes across as a call to arms to members of the Sikh community. And then there are the two American civil rights lawyers Amy Washington and Amelia White whose introduction scenes are quite hilarious – they strike sexy poses, gaze invitingly at our Sikh heroes, later one of them looks like she’s about to break into a dance in a courtroom before she delivers a lecture on Sikhism to the hapless jury!
The acting is almost uniformly amateurish and the lead players’ hand movements accompanying their dialogues reminded me of the worst actors in my junior school plays who gestured awkwardly while speaking because they didn’t know what else to do. The camerawork in I Am Singh is calculated to highlight Chahal and Issar’s great height though the lasting impression is, in fact, of Issar’s immense weight gain!
The film is filled with stereotypes … the good Muslims, the good white folk, the evil white skinheads with tattoos, the brave Sikhs … but since this is such a tacky film, it’s not even worth being offended by it. It’s not worth protesting either against the fact that the witnesses to the murderous attack on Ranveer Singh’s family are divided into two groups: Indian Hindu guys who are too cowardly to speak up and Pakistani Muslim guys who stand up for their Indian brethren.
But frankly, who cares, when this film provides us with perhaps the most entertaining Hindi film song of the decade, sung by none other than Kunal Ganjawala and Sukhwinder Singh, with lyrics by two people called Deepali Issar and Sandeep Nath who must be truly delightful creatures. For your reading pleasure, here below are the lyrics of Turban victory:
Bole so nihaal / Sat shri akaal / We live for the turban / We die for the turban / It’s all about the turban / Victory! / With all our might, we’ll fight for justice / We’ll fight for the right. / With all our might, we’ll fight for justice / We’ll fight for the right. / We are the warriors / Our turban is our pride. / Yeah, we are the warriors / Our turban is our pride / Our turban’s our pride. /… / Oho, oh oh, oh yeah yeah yeah ee yeah … / Don’t preach the hate / Don’t spread the rut / We’ll give it back / We’ll make you shut. / And if you call us any names / You’ll regret, you’ll feel the shame …
To get the full impact of those lines, do google Turban victory and listen to the song. I feel selfish keeping such an enjoyable experience all to myself!
Rating (out of five): 0 stars
CBFC Rating:                       U/A
Language:                              Hindi with Punjabi and English
Photograph courtesy: http://www.iamsinghfilm.com/
Posted by Anna MM Vetticad at 9:23 PM