This summary is not available. Please click here to view the post.
Posted by Anna MM Vetticad at 11:40 AM No comments: 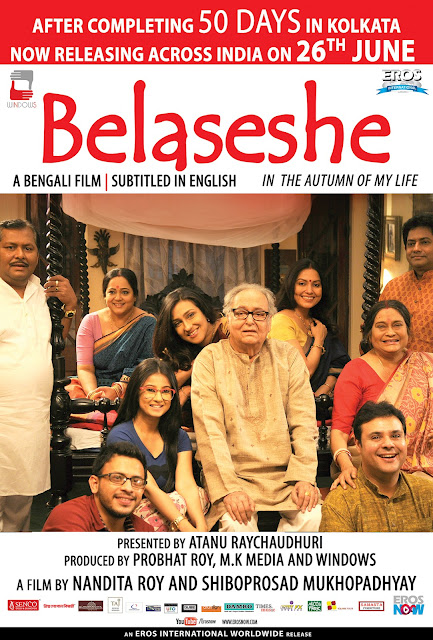 There is a warmth that envelops the heart of a certain kind of film buff when a veteran actor walks on to the screen. I confess I am that kind – emotional to the point of being schmaltzy. But even the pleasure of seeing the legendary Soumitra Chatterjee – reunited here with Swatilekha Sengupta, heroine of Satyajit Ray’s Ghare Baire – is insufficient compensation for Belaseshe’s painfully traditionalist view of marriage and almost laughable endorsement of socially dictated pre-designated gender roles within the institution.

Tagore’s The Home And The World on which Ghare Baire was based, gave us a husband who wanted his wife to have a life beyond the home. At one point, it seems that Biswanath Majumdar (Soumitra’s character in Belaseshe) shares that mindset. But Tagore and Ray were not faking liberalism; Belaseshe is. And so, in the end, Biswanath explains that he has come to realise a wife’s role in a marriage is inside the house and the husband’s role is outside.

What a disappointing, conventional conclusion from a film that starts out asking tough questions!

Soumitra here plays an old man who shocks his family by announcing that he wants a divorce from his wife of almost 50 years. Biswanath does not hate Arati (Swatilekha). He simply believes they have become a habit with each other in a loveless marriage that is not worth preserving. When she recounts the pleasant times they’ve had together, he tells her he thinks she loves domestic life rather than him. In a nation that deifies marriage and motherhood, how often do you see a mainstream film with the courage to articulate such thoughts?

Biswanath even alludes to his sexual needs and her disinterest. How often do you hear an old couple discuss such matters in an Indian film?

While hers is a relatively tepid character, she too raises a valid point when, in response to his complaint that she was not available for romance in their younger days, she asks him how she could have possibly spared the time when she was looking after his ailing dad.

These are all issues worth addressing. Is raising a family the sole purpose of marriage? Or should companionship be the primary goal? Is procreation the only purpose of sex? Is sex to be treated as dispensable in a marriage once you’ve had the number of children you want?

Biswanath’s decision to divorce Arati and the impact on their children could have led to a deep, much-needed exploration of the pluses and minuses of marriage along with these crucial questions. What we get after the initial promise though, are cliches, conformism, a cringe-worthy romanticisation of wifely slavishness and a transparent effort to trivialise modernity.

In a scene clearly intended to be highly romantic, Arati seeks to illustrate her love for Biswanath by revealing that she used to pick up the wet towels he would leave around after bathing and re-use them herself, to imbibe the smell of him; she would also eat his leftovers after each meal.

If you are moved by her revelation, forgive me for saying this… Ugh.

Before you present a counter argument, let me pre-empt it: I have no doubt relationships like Biswanath and Arati’s do exist. The issue is that the film pretends at the start to be questioning such marriages, then goes down the same old beaten track of glorifying them.

No effort is spared to please conservatives who are opposed to a dissection of marriage, who deny the intrinsically patriarchal nature of the institution, who believe every marriage is worth preserving at all costs, and who see procreation and child-rearing as the noblest of all causes, to be ranked way above friendship in a marriage, companionship, sexual pleasure and happiness.

Director duo Nandita Roy and Shiboprosad Mukherjee’s Belaseshe is not the liberal film it projects itself as being. Nowhere is this clearer than with the difference in its treatment of male and female infidelity. Biswanath and Arati’s son Barin (Shankar Chakraborty) and daughter Mili (Rituparna Sengupta) are both having extra-marital affairs, yet the film makes only brief references to Barin’s indiscretion and ultimate penitence, whereas it dwells at length on Mili’s unfaithfulness and later gives us elongated scenes of her remorse.

In the end, Biswanath does precisely what he claimed he was against at first. He said he was anti a marriage being nothing more than a habit you’re afraid to break; yet when he returns to Arati it is because he misses the presence of the person who would pick up his dirty clothes after him and always knew where his shoes were. Just as he wanted, she has become independent in his absence. He, however, is too dependent on her for his daily needs. Is that what makes a marriage worth holding on to? Why not hire an efficient maid instead of getting a wife? Biswanath seems to have forgotten by then that he had himself earlier made this point to the dutiful Arati.

There is also a clever attempt to deify tradition as symbolised by the old couple, while making light of modernity, personified by their youngest daughter Piu (Monami Ghosh) and her husband Palash (Anindya Chatterjee). The effort to lend gravitas to Biswanath and Arati while comedifying Piu and Palash is unmistakable. The youngsters are both TV producers. Their milieu is treated with the same disdainful attitude that makes the elderly in the real world routinely say, “Aajkal ke bachchon ka kya kehna?” (What is one to say of today’s generation?) Palash comes across as a buffoon. And from Piu’s tongue emerges such trite lines as this one: We are constantly social networking but there is no networking in this room.

The cast is a mixed bag. Soumitra’s sensitive face is always a joy to watch and despite the faux liberalism of Belaseshe, it is hard not to be drawn to his Biswanath. Swatilekha has her moments but for the most part is deadpan. Of their children and children’s spouses, the most convincing performances come from Shankar as Barin, Indrani Dutta playing his wife, Rituparna as Mili and Indrajit Chakraborty making a brief appearance as her boyfriend. Aparajita Auddy, Kharaj Mukherjee, Sujoy Prasad Chatterjee and Anindya caricature their characters, which is a factor as much of the faulty writing as of their acting. Monami and the grandchildren fare better.

This is a theme that called for greater honesty of purpose and delicacy in approach. What we get instead is a please-all balancing act, verbosity and literalness. Despite the presence of Soumitra-da and the promising premise, Belaseshe is an unremarkable film.

Posted by Anna MM Vetticad at 10:15 PM No comments: