THE RAPE OF AVANTHIKA

Bahubali features one of the longest scenes of romanticised symbolic violation ever seen on screen. Why are we as a nation not angered by it? 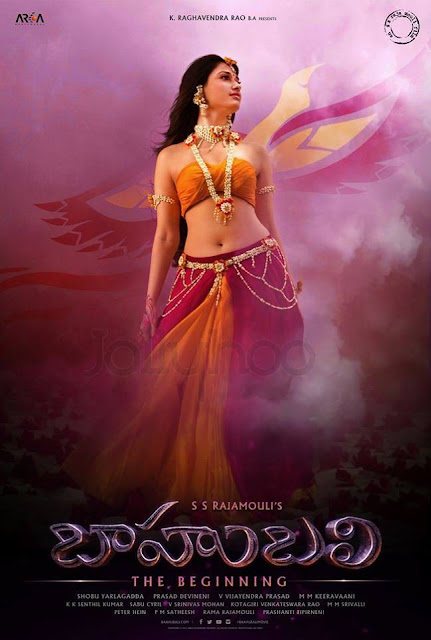 She, a brave warrior, lies on the banks of a lake, falling asleep with her slim hand in the water. Unknown to her, he — an absolute stranger — paints a flower on her wrist.
Furious on discovering the drawing, she sets out to find out how it got there. He unleashes a serpent on her from behind, and while she stands frozen, he — still a stranger — etches another bloom on her shoulder before disappearing from the scene.
Enraged at the assault, she takes off in search of the offender. When they finally meet face to face, he grabs her, and then comes a sexual dance as he pushes and pulls her about, unties her hair against her will, strips her of her practical fighter’s clothing and skilfully transforms the rest of her outfit into more ‘feminine’ garb. He forcibly smears natural dye on her lips to redden them and lines her eyes with the essence of crushed berries. At this point, she glimpses her transformed self in a sheet of water, and quivers coyly before their dance continues. She finally falls asleep in his arms.
And that, ladies and gentlemen, is how a woman is tamed. (Applause)
This scene featuring Prabhas and Tamannaah Bhatia appears in director S.S. Rajamouli’s box-office-busting Bahubali, released in the original Telugu and Tamil, and in multiple dubbed versions last week. It is a visually spectacular film with an engaging story rich in mythological references. Sadly, that’s what makes it dangerous because it has the potential to gain legitimacy among more viewers and to reach a far wider audience than an ugly, unpolished, unintelligent, unimaginative, un-entertaining film.
This aggressive display of ‘love’, in particular, is set against a gorgeous landscape with gentle music playing in the background. The beauty of the scene is designed to lull us into an acceptance of its insidious imagery and message, an acceptance that is bound to attract at least some reactions such as “stop nitpicking”, “have you lost your sense of romance?” and the standard “chill, relax, it’s just a film” to this column.
Actually, we can’t afford to “chill”. Certainly not when human society is still grappling with the meaning of consent in the matter of romantic and sexual relations. Prettified though it has been, the lead couple’s mating dance in Bahubali is unequivocal in its contention that it is okay to fool around with a woman without her knowing, or to force yourself on her when she resists, because that’s what courtship is all about.
If you are among those who are touched by this scene, permit me to plant the seed of a thought in your head. In your mind’s eye, if you replace the handsome Prabhas with Shakti Kapoor (or another actor who usually plays villainous roles), would you still find his actions poignant?
In the Hindi film Tanu Weds Manu (2011), Manu – again a stranger – is smitten when he sees a drunken Tanu lying passed out in her bedroom. So overwhelmed is he by his emotions that he kisses her. It’s unfortunate that many people find it hard to empathise unless they personalise a situation, but that being the reality, if you are moved by this scene, try this exercise: ask yourself whether it would be acceptable if a woman you love — perhaps your daughter — were lying asleep and your son’s friend or the male household help or an unknown man entered her room and kissed her?
If you object to either of the above alternative scenarios, why is it okay to romanticise them in a film?
The question is crucial in a nation as conservative as ours where most parents do not discuss romance with their children and where gender segregation is widespread, as a result of which many youngsters take guidance from cinema. If Salman Khan lifts Jacqueline Fernandez’s skirt without her knowledge in Kick (2014) and she shows anger at first, but soon dances merrily with him, the message to impressionable fans is that women secretly feel flattered by harassment — or what is euphemistically called ‘teasing’.
Impressionable young minds are not the only ones though who shut their eyes to the trivialisation of sexual violence on screen and resist or fail to comprehend non-traditional definitions of consent — and informed consent — off screen.
It’s really quite simple, you know. If she does not know you are doing it, it’s a no. If she does not understand what you are doing, it’s a no. If she says no, it’s a no. If she resists you physically, for god’s sake it’s a no. If she has not said yes, it’s a no. In all the above scenarios, if you replace her with a person of another gender, it’s still a no. And if you don’t have consent but still go ahead, it is rape.
For most people though, the issue of consent arises only at the point of penetrative sex in real life, or on screen with a literal — not metaphorical — depiction or suggestion of forced penetration. Everything up to that instant is considered fair game.
This is why droves of Malayalam film fans defend that scene in Annayum Rasoolum (2013) when Anna is seated on a bus, oblivious to the presence of her stalker Rasool behind her as he quietly passes his hand over her hair.
This is also why the rape of Avanthika by Bahubali is not causing the nationwide outrage that it should.
(Anna MM Vetticad is the author of The Adventures of an Intrepid Film Critic. Twitter: @annavetticad)
(This column was first published in The Hindu Businessline newspaper on July 18, 2015)
Original link: http://www.thehindubusinessline.com/blink/watch/the-rape-of-avanthika/article7433603.ece#comments
Related link: “बाहुबलीः ये रिझाना है या बलात्कार?” – Follow-up article  by Anna MM Vetticad on BBC Hindi about the angry right-wing reaction to “The Rape Of Avanthika” and the trivialisation of sexual violence in Hindi cinema
http://www.bbc.com/hindi/entertainment/2015/07/150723_mysogyny_india_films_bahubali_women_rns


Note: This photograph was not sourced from The Hindu Businessline
Posted by Anna MM Vetticad at 7:02 AM