(These are transcripts of Anna M.M. Vetticad’s video reviews aired on Rajya Sabha TV on October 13, 2019.) 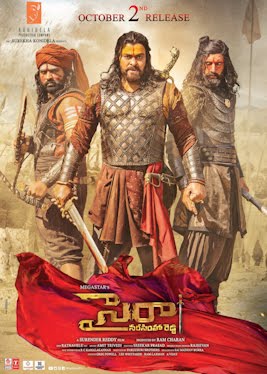 Hello everyone, today I’m reviewing two films that are complete contrasts in terms of content and storytelling style. Both are big star vehicles though.

First, Syeraa Narasimha Reddy in which Telugu superstar Chiranjeevi plays Uyyalawada Narasimha Reddy who led an uprising against the British East India Company in the mid 1800s. This was before the 1857 revolt. To emphasise this point, his story is recounted here by Rani Laxmibai of Jhansi in a speech with which she hopes to inspire HER men to fight the British.

In flashback form, Laxmibai takes us through the life of Syeraa Narasimha Reddy, one among several once-powerful rulers in the Telugu heartland who are being stripped of their power by the British.

The common people are reeling under the back-breaking taxation policies of the British, when the hero sets out to unite his fellow rulers and the farmers against these foreigners.

Woven into the narrative is also his romance with the classical dancer Lakshmi, his relationship with his wife, song and dance routines shot on a gigantic scale, and endless action scenes.

What is nice about Syeraa Narasimha Reddy is that it tells the story of an anti-British rebellion from southern India. The popular discourse in large parts of India tends to focus on the contributions and achievements of North Indians, not just in India’s freedom struggle but in all matters. In this context, Syeraa Narasimha Reddy is significant. But it squanders away that plus point with the WAY it tells its story.

As it turns out, the primary goal of this film is to underline Chiranjeevi’s star stature. More effort has been invested in creating a spectacle rather than in writing in-depth characters. Reddy is built up as a saintly He Man with superhuman strength and yogic powers. He is projected as SO INVINCIBLE, that his ultimate defeat seems unconvincing even though it is spelt out as a historical fact.

To give the film scale, Chiranjeevi is surrounded by multiple major stars from Tamannaah to Nayanthara, Sudeep, Vijay Sethupathi, Amitabh Bachchan, Anushka Shetty and ... well, the list is long. Except for Tamannaah and Bachchan to some extent, the others are given short shrift by the screenplay.

This story has huge potential for social insights, but director Surender Reddy is too busy lionising Syeraa Narasimha Reddy and Chiranjeevi. Therefore the film offers us little understanding of the class and caste struggles involved. Realism and facts are not a priority in this revisionist historical drama.

As far as technical aspects go, the lavish production design and costumes are eye-catching, but the special effects are of confusing quality. Some night-time scenes are wonderfully impressive, but some scenes are surprisingly mediocre. The SFX in that long passage involving bulls, for instance, is embarrassingly tacky.

The overall tone of the narrative is loud, rubbing every point, every message in our faces.

For hard-core Chiranjeevi fans, perhaps there is some pay off here since their favourite star dominates the film in a role designed to overshadow all else on screen. That apart, Syeraa Narasimha Reddy is a generic, uninspiring film that lacks soul. 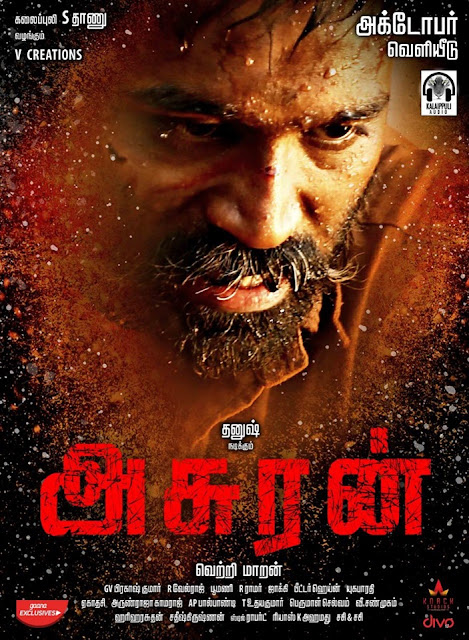 Now on to writer-director Vetrimaaran’s Asuran.

From the moment he grabbed the spotlight with Aadukalam early this decade, Vetrimaaran has made his own road. With Asuran he offers a stellar redefinition of Big Cinema in the Indian context.

There is a tendency in our country to assume that if a film revolves around caste or exploitation of any form, then it cannot take on the trappings that give mainstream Indian cinema its larger-than-life feel. With Asuran, Vetrimaaran walks a fine line to ensure that his hero is projected as a giant among men without trivialising the struggles of a marginalised community or making him appear so unconquerable that his defeats become hard to swallow.

Dhanush plays Sivasamy whose impoverished family is engaged in a feud with a powerful land-owning family in the area. Initially, Sivasamy comes across as a pacifist. His sons are frustrated with his keenness to avoid violence. Later though, he introduces us to his defiant past and the havoc his defiance wreaked on those around him. 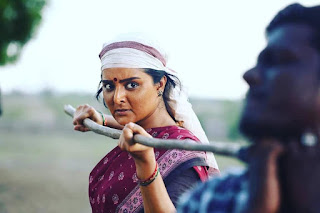 Dhanush’s remarkable physical transformation is not the only indicator of the passage of time in Asuran. His is a richly detailed character that evolves too as the story runs along. Even when he metamorphoses into a roaring lion on screen, his brilliant acting, the direction and the writing ensure that he remains believable.

Although Sivasamy is the central figure, the screenplay works hard to develop the characters of his wife Pachiammal, two sons, brother-in-law and antagonists. The excellent supporting cast does full justice to the writing. But none of the stars overshadows the film’s story or messaging.

Malayalam superstar Manju Warrier in particular deserves to be singled out for her deeply felt, relatable performance as Pachiammal in a film that marks her Tamil debut. She is so good, that you have to wonder why even progressive filmmakers like Vetrimaaran tend to think in terms of male-centric stories.

That said, Asuran uses a conventional genre – the male-centric action drama – to tell an unconventional story.

It is violent, but it does not endorse violence.

It uses episodes of loudness to take us to a point of stillness and calm.

In short, Asuran is lovely.

Link to the video of these reviews aired on Rajya Sabha TV:
https://youtu.be/pSOv1xEiXcw

Posted by Anna MM Vetticad at 5:10 PM No comments:

(These are transcripts of Anna M.M. Vetticad’s video reviews aired on Rajya Sabha TV on September 1, 2019.) 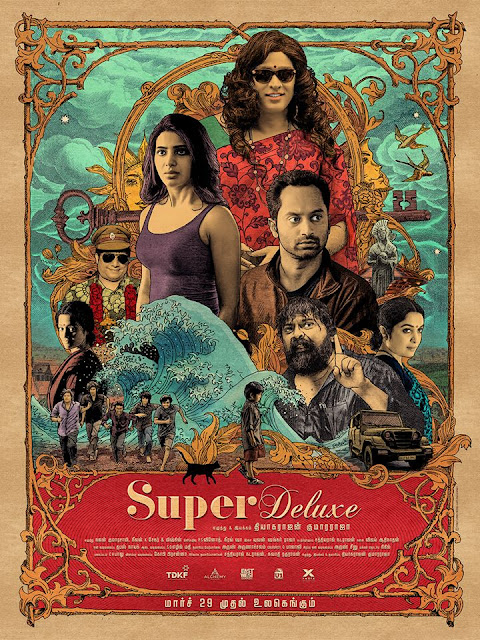 Hello and welcome to this new film review segment in Colours of India. My name is Anna M.M. Vetticad.

On this show we are celebrating the great diversity of Indian cinema. And so today, I will speak to you about the Tamil film Super Deluxe and the Malayalam film Thanneermathan Dinangal.

Super Deluxe is directed by Thiagarajan Kumararaja and has a large cast packed with stars.

This is a film with a multi-strand narrative. Its four strands – or sub-plots if you prefer to call it that – are connected in unexpected ways.

The first strand features an unhappily married couple played by Samantha Akkineni and Fahadh Faasil. The two are trying to get rid of a corpse without being caught.

The second strand is about a little boy awaiting the return of a father who abandoned him years earlier. When the Dad finally comes home, it turns out that he is now a trans woman who goes by the name Shilpa.

Shilpa is played by Vijay Sethupathi.

Super Deluxe has a beautifully balanced tone. On the one hand it is extremely funny. On the other hand it is extremely sensitive while dealing with serious subjects like compatibility in marriage, the marginalisation of the LGBT+ community, sexual violence and the hypocrisy of men who want their OWN mothers to be devis though they take OTHER women lightly.

I could not relate much to the switch to fantasy towards the end of the story about the porn-watching boys, but there is SO MUCH to love in this film.

The performances in Super Deluxe are top-notch. The one that has got most attention since its release is Vijay Sethupathi playing a trans woman. Now in an ideal world, TRANS actors would play TRANS characters. Indian cinema has not yet got to that stage, with rare exceptions like last year’s Malayalam film Aabhaasam which starred the trans actor Sheetal Shyam. What we have in most of our films is MALE actors playing trans characters. Till we get to a more evolved stage in our casting, it is worth pointing out that a major male star playing a trans character seriously risks denting his ‘macho’ image in our patriarchal society. So this too is perhaps worth celebrating as a baby step forward since our society prefers to pretend that the trans community does not even exist.

One of the most moving aspects of Super Deluxe is the little boy Raasukutty’s absolutely non-judgemental response when he finds that the man who fathered him is in fact a woman.

Raasukutty is my personal hero. And his non-judgemental mother is my heroine.

It is funny, it is brave, it is thought-provoking, and frankly, it is an act of social rebellion as much as it is a film. 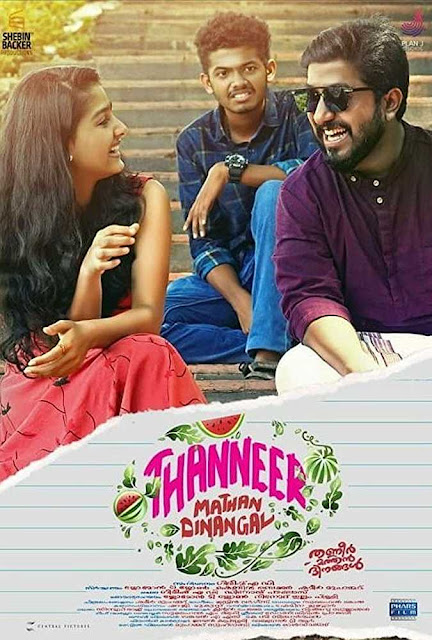 Thanneermathan Dinangal literally means Watermelon Days. The title comes from the large quantities of watermelon juice that the hero consumes at the food kiosk next to his school. He goes there on a regular basis to pour his heart out to his gang of friends.

Mathew Thomas plays the teenaged hero Jaison who is struggling with multiple teenaged problems. He is in love with his classmate Keerthy, played by Anaswara Rajan, who is not interested in him. He is being tormented by the school bully. He is struggling with exams. And as if life is not tough enough, a new teacher starts picking on him and him alone.

Thanneermathan Dinangal is sweet without being sugary.

The lead actors are cute without being overly cutesy.

And although it is hilarious, it does not trivialise the problems of teenagers.

In fact the beauty of this film is that it plays out so naturally that it feels as if real people allowed the filmmaker to place cameras around their homes and school to capture what is going on in their real lives.

This is a thinking comedy. In a country where we are used to commercial cinema showing men stalking women that they like and portraying that stalking as a legitimate form of courtship, Jaison and Keerthy from Thanneermathan Dinangal hold out a lesson for filmmakers. In fact one of the most striking aspects of this film is a young girl telling a young boy that she likes him BECAUSE he did not pester her when she turned down his romantic overtures.

Thanneermathan Dinangal is one of those rewarding films that is thoroughly enjoyable and also has a very important point to make.

Link to the video of these reviews aired on Rajya Sabha TV:
https://www.youtube.com/watch?v=pZi5KLZxkLw&list=PLFC6213A60D4CBE00

A longer review of Thanneermathan Dinangal by Anna M.M. Vetticad was published on Firstpost on August 11, 2019:
https://www.firstpost.com/entertainment/thanneermathan-dinangal-movie-review-franky-from-kumbalangi-gets-an-omana-padam-all-his-own-7144191.html

Posted by Anna MM Vetticad at 4:24 PM No comments: