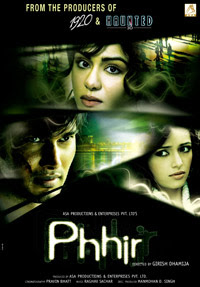 “The future is nothing but the past … again.” With an eerie tagline such as this, Girish Dhamija as director and Vikram Bhatt as producer, you’re right in assuming that Phhir is a supernatural thriller. Bhatt, of course, peaked in this genre with his directorial venture Raaz starring Bipasha Basu and Dino Morea. Dhamija is the man who helmed the whodunit Yakeen starring Priyanka Chopra and Arjun Rampal.
Phhir is the story of a married couple based in Newcastle, England. Kabir Malhotra (Rajniesh Duggall) is a doctor, Sia Malhotra (Roshni Chopra) is a professor of law. Their happiness comes to a screeching halt when one day Sia vanishes into thin air. As the police and Kabir try to grapple with her disappearance, clairvoyant Disha (Adah Sharma) enters the picture. Has Sia been kidnapped for ransom? Is she alive or dead? Was there more to her life than Kabir was aware of? Did her past – or his – have anything to do with their trials in the present day?
Dhamija manages to draw us very effectively into the story in the first half, building up suspense with every passing scene. He cashes in on the grays, whites and blacks of wintry Newcastle to create a sense of fear and despair. Pravin Bhatt’s camera takes full advantage of the lovely locations to give us a beautifully laid out film. Adding to the visual appeal of Phhir are the good-looking lead couple and pretty Adah Sharma. The women in particular wear fabulous clothes in every single scene. All three actors are effective in their roles. Adah especially has an interesting screen presence that she uses well to convey the frustrations of a woman who sees fractured images of the past with her mind’s eye, but is desperate to help those depending on her to see the complete picture. Rajniesh and Adah were the leads in the spook film 1920 that was directed by Vikram Bhatt. In Phhir though they are not romantically paired opposite each other, they share a nice on-screen chemistry.
But no film can be better than its writers, no thriller can be better than its finale. Vikram Bhatt and Dheeraj Rattan’s screenplay gives us a strong first half, but loses steam in the second half especially as Phhir heads towards its climax. The unsatisfactory, tepid denouement is enough to leave you as cold as the Newcastle winter. A film with a classy finish that does not finish well – that sums up my Phhir experience!
Rating (out of five): **
PS: If you’ve read my review of Be-Careful also starring Rajniesh Duggall, then I must add that despite its flaws, Phhir serves Rajniesh well. An actor (especially a newcomer) cannot determine the quality of the final product he stars in, but he can gauge from the script whether the maker’s intention is to create a low-brow film! Imperfections in a film may not destroy an actor’s image, crassness certainly can!