We all know that Bollywood makes a zillion films each year! Nothing drove home the point to me better in 2011 than a brief, less-than-fortnight-long vacation I took that resulted in me missing almost a dozen new releases!!! 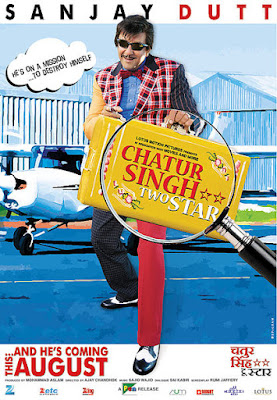 If it weren’t for my resolve not to skip a single film this year, I might have gone by the reviews for Chatur Singh Two Star and wisely stayed away from it. Par yeh kambakkht resolution ne peechha chhodne ka naam hi nahin liya! And so I watched this desperate Bollywood version of the Pink Panther series and sighed a little as I experienced the final nail in the coffin of my childhood memories of Sanjay Dutt.
Chatur Singh Two Star is the story of a bumbling idiot of a Mumbai policeman who does everything wrong and yet ends up getting it right in the end. Like Jacques Clouseau, he unwittingly solves cases and is credited for deductions he really did not make. And like Jacques Clouseau, he’s an ass but not quite as much as you would think. Rumi Jaffrey’s script sends Chatur Singh off to South Africa on a secret mission that involves a murdered politician, his pretty secretary who is accused of the murder and a missing cache of diamonds. The juvenility of the script would have been tolerable if it had led to some laughs, but Chatur Singh fails even on that front.
Over the years Sanjay Dutt has been looking increasingly disinterested in the films he does. Watching him here, failing to extract a single laugh in a ‘comedy’, almost breaks the heart. Is this really the man who played that memorable fellow Munna? And is this overweight actor really the same guy who many people consider the original body builder of modern Bollywood, preceding even Salman Khan? Watching a song in which the cameraperson was clearly trying hard and failing to camouflage Chatur Singh / Dutt’s paunch, and in which the actor seemed barely able to move a leg, would count as one of the saddest film-viewing experiences of my year.
Also sad is the sight of a usually dependable actor like Suresh Menon over-acting his way through the role of Chatur’s sidekick in this embarrassingly bad film. Getting Dutt to sing the number I sing you sing we all sing for Chatur Singh does nothing to redeem this no-hoper. You can imagine how bad the situation is if I tell you that Ameesha Patel’s acting is the high point of the film (to be fair to her, she really does look good in a red sari).
So I’m not kidding you when I say I needed coffee to keep me awake during this film. Giving your hero a thin moustache will not lend him the endearing qualities of Clouseau! Slapstick stupidity can be fun in the hands of an efficient director. But the mind-numbing idiocy of Chatur Singh Two Star does not merit even a single star!
Rating (out of five): 0 stars
Photograph courtesy: http://en.wikipedia.org/wiki/Chatur_Singh_Two_Star
Posted by Anna MM Vetticad at 12:11 PM