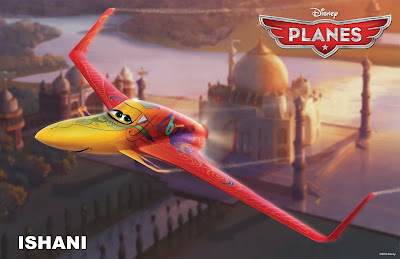 Planes is sweet. It’s also insubstantial and feels incomplete; a film I think I might have liked better if I’d never seen Pixar’s Cars.

As Hollywood animation flicks go, this one seems to be following a template set by Cars without the depth and brilliance of that film. Dane Cook voices Planes’ leading man Dusty Crophopper, a male plane whose job as a cropduster is to spray pesticides on fields. He lives in a town that’s “off the map” (there you go – a reminder of Radiator Springs, where Cars’ Lightning McQueen accidentally found himself) and wants to figure out if he can be something more than that. So he enters a prestigious international flying competition where he comes up against the accomplished and wickedly competitive Ripslinger (Roger Craig Smith) and his chamchas, the delightfully propah British gentleman Bulldog (John Cleese), the stern French-Canadian hottie Rochelle (Julia Louis-Dreyfus), her Mexican suitor El Chupacabra (Carlos Alazraqui), the attractive Indian lady plane Ishani (Priyanka Chopra) and other colourful characters. The problem is, as soon as we meet the principal cast, it’s clear where the story is headed: of course Ripslinger plays dirty, of course everyone else is won over by Dusty’s goodness and backs him, and of course Dusty falls for Ishani. Back in Dusty’s home town, the reclusive, retired naval warplane Skipper Riley (Stacy Keach) who reluctantly agrees to train our hero for the race, harks back to Cars’ elderly and bitter Doc Hudson. 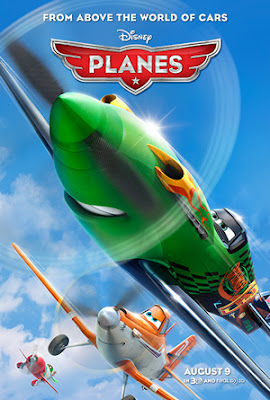 Planes’ locations are scenic, humour intermittently rears its head in the story and the film’s palette of colours is attractive. But Hollywood has set the bar so high with its animation films over the years, that this is a basic minimum we demand from each of them now. So what else? In terms of writing, beyond a point the film feels flimsy. In terms of action, sure there are some nice aerial manoeuvres during the race scenes, but except for one suspenseful ride through a train tunnel in the Himalayas and another wonderful sequence in which Dusty crashes into the waves in a furious Pacific Ocean, there’s nothing particularly qualified to take our collective breaths away.

For us here in India, Priyanka’s name in the credits is of particular interest. It’s nice then to see that Ishani is a crucial character in Planes and – this is particularly significant – the film has neither caricatured her nor exoticised her as an Indian the way some American films and teleserials still do. The romance between Dusty and Ishani is awww-inducing and one of the film’s high points. Priyanka purrs her way through the role, her voice oozing so much sexiness, that when Dusty gapes at her retreating back gasping the words “nice propeller!” you know exactly what he’s getting at. There’s also a charming scene in which Ishani takes him on an aerial survey of India, over the Himalayas and the Taj Mahal, when A.R. Rahman’s Tere bina besuwadi ratiyaa from the film Guru plays in the background. Truly lovely! Sadly, considering that she provides a very important plot point in the film, their relationship is rounded off in a hurried and unsatisfactory fashion towards the end. Wonder if the sequel will take it forward.

Making her Hollywood debut here, Priyanka finds herself in the midst of a star-studded voice cast. The numero uno Hollywood animation film on that front has got to be Kung Fu Panda 2 – I mean, imagine the glare of a film featuring the voices of Dustin Hoffman and Angelina Jolie, Jack Black, Jackie Chan, Lucy Liu, Gary Oldman, Michelle Yeoh and Jean-Claude Van Damme among others! – but Planes doesn’t do too badly on the front either. Seinfeld’s Julia Louis-Dreyfus delivers a neat French accent without going over the top, and Desperate Housewives’ Terri Hatcher is cute as a button playing Dusty’s cynical friend Dottie. The pick of the lot though is Brad Garrett as Dusty’s fuel truck buddy Chug. Garrett, of course, is familiar to Indian television viewers as Ray’s gigantic brother in Everybody Loves Raymond.

There you have it then… Planes has its moments that are worth a single viewing, but it’s also decidedly unmemorable. John Lasseter who co-wrote this film, seems not to have been able to shrug off the memory of Cars 1&2, both of which he directed (well, actually he shared direction credits on sequel) and co-wrote. So yeah, Dusty Crophopper is a nice guy and Dane Cook does a fair job of voicing him, but it’s got to be said that there’s no one quite like Owen Wilson and his blazing red Lightning McQueen!