WARNING: THIS IS THE LONGEST REVIEW ON THIS BLOG: 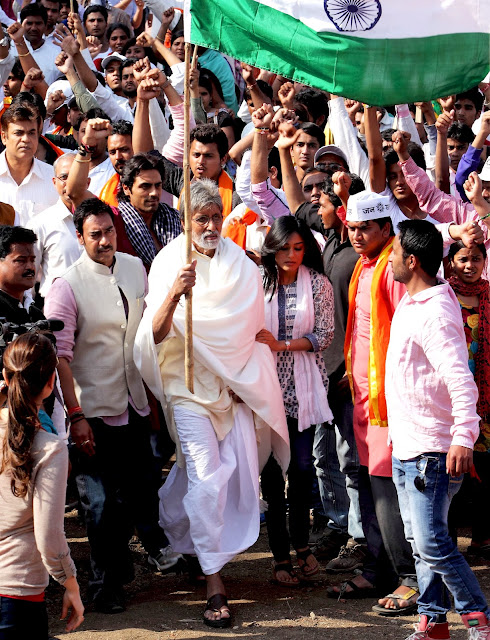 Now take a moment to imagine my frustration with Prakash Jha’s Satyagraha. It’s wonderfully timely and intermittently gripping, but suffers from an inability to decide whether it wants to be realistic or a vintage Bollywood fantasy that’s over-dramatised, unreal and inaccurate. This is the story of an idealistic old Gandhian called Dwarka Anand (Amitabh Bachchan) in Ambikapur, Madhya Pradesh, who is spurred by a personal tragedy to become the leader of an anti-government movement with his foster son Manav Raghvendra (Ajay Devgn), a well-meaning but thuggish local politician called Arjun Rajvansh (Arjun Rampal) and a high-profile national TV journalist, Yasmin Ahmed (Kareena Kapoor Khan). Their enemy no. 1: the state home minister Balram Singh played by Manoj Bajpayee.

Satyagraha is inspired by the mass citizens’ protests of 2012 led by Hazare, Kejriwal, Kiran Bedi and others culminating in the formation of Kejriwal’s Aam Aadmi Party. It’s relevant, and there are twists and turns in the film that are extremely convincing, as you watch corrupt politicians, parties and a government switch allegiances, manipulate state resources and use the police to quell a people’s movement. As heartening as it is to watch an intelligent man tap the burgeoning mainstream media, the social media and simmering outrage against politicians among the youth, it’s also alarming to see how easily a peaceful movement can go out of hand due to an occasional leadership mistake combined with volatile insiders and hostile outsiders. These proceedings unfold most naturally on screen. Even the voice of reason in Satyagraha – Kareena’s Yasmin – does not feel contrived; she is utterly believable in her attempts to inject sanity into the andolan while all else is crumbling around her.

With such a strong basic plot at his disposal, it’s surprising that Prakash Jha felt the need to rev up the proceedings with a needless romance, inane songs including a tepid number between Manav and Yasmin, a raucous background score and some unnecessary illogical elements. Don’t get me wrong – I love musicals. It’s just that the insertion of songs in this film is awkward, as are the songs themselves. Yes, Kejriwal & Co did have musicians present to keep up the spirits of the crowd at Delhi’s Ramlila Maidan, but that’s no excuse for Satyagraha serving up such an average musical score. Even the interpretation of the goosebump-inducing Raghupati Raghav Raja Ram is far less rousing in the film than it’s been in the trailers. And what’s the reasoning behind keeping the background music so loud and so cliched at most times? Seriously, if you didn’t have a shehnai playing at your wedding, would you have forgotten you are getting married? Likewise, did they think the viewers of this film would fail to spot the drama if the music didn’t rise to a crescendo in every dramatic scene?

In the midst of this comes Manav and Yasmin’s love affair. The situation is not implausible, the handling of it is. Ajay and Kareena look like a fond elder brother and younger sister who were forced to star as a film’s romantic leads and told, “Okay, now kiss karo nahin toh maar padegi.” There is zero chemistry between them, when his mouth landed on her forehead I was almost expecting her to pull out a rakhi and tie it on his wrist, and that pretend liplock with the camera hiding their faces was almost funny. Does Kareena now have a no-smooching policy in films? If yes, that’s her call of course, but why include a sex scene in your film when your actors – both of them – seem so conscious of the lines that have been drawn?

Even in his overall performance, an otherwise-accomplished actor like Ajay seems somewhat out of sorts here. He’s also looking uncomfortably chubby in the face and tubby around the waistline, which is unusual for him. This man was on fire in Jha’s Apaharan and Gangaajal, so we know their team is capable of so much more. In contrast, Manoj Bajpayee as a manipulative politician is the very embodiment of the slime and grime that’s mucking up this nation. Despite the high decibel level of the film as a whole, he refrains from going over-the-top. Ditto for Vipin Sharma in a much smaller role as a leader of a “kattarwaadi” party. Bachchan Senior is spot-on as he metamorphoses from a seemingly impractical idealist to a heart-broken father to a leader of the masses. It helps that his face is getting more beautiful with time.

I know it’s not fashionable to say this, but I’ve begun to enjoy Arjun Rampal’s performances. Gentlemen readers, wipe that grin off your faces!!! This has nothing to do with the man’s delicious handsomeness. Remember, he had the looks even when he started out in Bollywood, and all of us – justifiably – hung, drew and quartered him for his lack of acting skills. But I’ve begun to find his acting interesting since his villainous turn in Don. Here in Satyagraha, he’s very much at home as the local neta whose hooliganism once got him expelled from school.

Kareena’s performance and role merit a separate discussion. She has chosen to play Yasmin as one of the slightly more over-wrought, emotional journalists that we see these days on news channels. No issues with that, though she’s more glamorously dressed than a female journalist in India is likely to be while reporting from a small town. Yasmin is successful, powerful and slightly arrogant (witness her behaviour towards her boss) and who better than Ms Kapoor to pull that off? In the writing of her role though, Jha and Anjum Rajabali have shown a strange lack of understanding of the functioning of the media. She’s a journalist but halfway through the film she joins forces with Manav and Arjun to become a leader of the movement – not a behind-the-scenes sympathiser as many journalists might be, but a frontline leader! All this while still on assignment for ABP News! You think the channel would have allowed that? No way! So why did they cast her as a journalist from Delhi? Why not as a local girl who joins the protests? No idea. What’s nice though is that a big tamasha is not made of the fact that she is a Muslim girl – she just happens to be a Yasmin, not a Geeta or Sita – though there is one fleeting moment when, in contrast with her language until then, she makes a reference to Allah, as though the film maker wanted to remind us of her religion in case we hadn’t noticed.

Which brings us to another instance of indifferent writing: just because the film has a media tie-up with ABP News, do they have to show reports on only one Indian TV channel? Would it have been so tough to show flashes of reports on some fictitious channels too? Did we really need a character to mention that she wanted a packet of a particular brand of basmati rice opened, or another to mention a cement brand? From a team of this standing, in a film that is not in the Chennai Express mould, we expect product placements to be handled differently.

On the political front, the film fails to recognise the urban-rural, small-town-big-city divide that ails this country. There’s a reason why Anna Hazare travelled all the way from the village of Ralegan Siddhi to Delhi to fast last year for the India Against Corruption movement: Team Anna knew that crowds were far more likely to be deemed crowds by the Central political leadership and the so-called national media if they were gathered in the national capital, that the government wouldn’t give them the time of day in the absence of sustained media coverage, that the Indian and international media were far more likely to give that coverage to a movement based in Delhi, that the attention of the population in Indian metros was essential to keep the national media interested, that this population in the metros was unlikely to care – or at least for long – unless the action was close to them plus visible on national TV and… You get the picture of the vicious cycle? Yet in Satyagraha, despite being based in little Ambikapur, Ajay’s Manav seems to have no trouble in garnering the attention of the masses on the social media, the national mainstream media and, as a consequence, the state government.

To buy this requires a huge suspension of disbelief if not a detachment from the Indian reality. Even if you grant this to the film as cinematic licence, it’s hard to ignore its other failings. There are places where Satyagraha is truly compelling, heart-wrenching and unpredictable, but too much of the time, it defies probability and is just too painful to the ears. All I can say after watching Satyagraha is: Thank god for Madras Café!