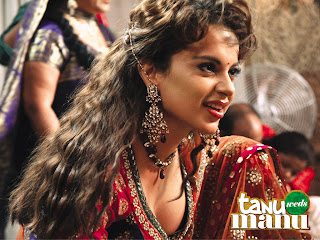 If Tanu Weds Manu had been wrapped up at the right point, it could have been a little gem. Instead a potentially lovely film is done in by a silly twist in the tale at the interval and a painfully stretched second half that almost killed it for me.
Almost.
Tanu Weds Manu begins with Manoj Sharma urf Manu landing in India from the UK where he’s a doctor in a pharma company. Like so many NRI boys on vacation, he plays along with the wishes of his parents who have lined up a whole string of girls for him to meet, ladki pasand karke byaah rachaane ke liye of course. Love strikes Manu swiftly and unexpectedly with Kanpur girl Tanuja Trivedi a.k.a. Tanu who arrives at their meeting with her face covered by a ghunghat, says not a word and then proceeds to faint. When the sari slips off her head to reveal a pretty picture, Manu is smitten for life.


Ladka says haan, their parivaar goes into a celebratory tizzy, but when Tanu reveals to Manu that she’s in love with another boy, he obligingly breaks it off. A parade of potential brides follows but Manu can’t get over Tanu. A chance encounter with her revives buried feelings. But question is: what does Tanu want? 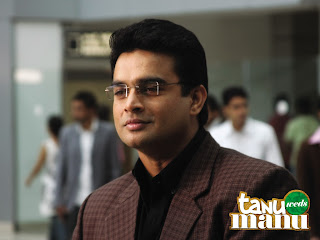 It’s a film that has so much to offer. You can’t help but like R. Madhavan as the silent lover who takes the girl’s every badtameezi (her choice of word, not mine). Each time he glances at Tanu, your heart goes out to him … even when the script stretches the point to such an extent that his character starts looking more like a loser than a mild-mannered man in love. The first half of the story is told so well that you feel transported from the theatre to actual north Indian middle-class homes. Besides, the supporting cast is quite incredible. There’s Deepak Dobriyal playing Manu’s best friend Pappi who kills with every look and word. Tanu’s best friend is played by a wonderful new actress called Swara Bhaskar whose screen presence and lovely voice were unmissable even in that non-film Madholal Keep Walking in 2010. And her fiancé is such a convincing Sardarji that I didn’t recognize him till I read the credits: no, he’s not a Singh, he’s a Khan, hottie Eijaz Khan – you will know him minus the turban as a familiar face on the modelling and teleserial circuit who has also done sundry roles in Hindi films for several years now.
The dialogues in Tanu Weds Manu are nicely written and delivered with natural ease by all these fine actors. Through the lens of cinematographer Chirantan Das, small-town India feels both charming and real. And director Aanand L. Rai’s potential for brilliance shines through in a pre-wedding scene when Tanu volunteers to entertain everyone by dancing to Kajra mohabbat wala. His every look … her every move … the tension in the air … their friends’ concern … everything falls into place in that one song which also marks a major turning point in the story in a very believable fashion.
So what pulls this film down? Well, imagine if I were to tell you that the entire second half should have been chopped down to 15 minutes? That I kept wondering how Kareena Kapoor might have played Tanu? And that I think Tanu of Tanu Weds Manu is also the worst written character in the film?
First, Kangna needs to do something about those pouting lips, her diction and poor voice modulation that have become too distracting to ignore. Great actors are those who dissolve their personalities in the characters they play and even lose their natural accents for a part. Tabu had us thinking she was really a Punjaban in Maachis, was more Tamilian than real Tamilian girls in Kandukondain Kandukondain and in The Namesake would have taught Bengali expats in the US a thing or two about being Bengali expats in the US.
But okay, not everyone’s a Tabu and we can deal with that. After all, we have lived through the eras of Hema Malini and Sridevi, both of whom had a long innings in Hindi cinema without ever mastering the language – they compensated for that flaw with their incredible charisma. But when Tanu tells Manu that she downed “kwaater bawttle vodka” with sleeping pills because of him, it was too much for me to take.
It doesn’t help that the writer seems all mixed up about Tanu. I completely buy the fact that she’s rebellious for the heck of it and takes on what she perceives as the trappings of a non-conformist – she smokes, drinks, tattoos a boyfriend’s name on her chest, repeatedly runs away from home, falls in love with men she knows will not be acceptable to her gentle parents – simply to prove a point to no one in particular. But what’s with her relationship with Manu?! The best parallel that I can draw is with Geet from Jab We Met who was supported through a very tough phase of her life by a man who knows she’s not in love with him. But Geet in JWM was not a bitch. With Tanu in TWM, it was tough for me to figure out whether she was a selfish creep who was using Manu or just so downright dense that she didn’t realise he was pining for her.
Strange! It almost seems like one person wrote and directed the first half of this film, then someone else handled Part 2. Now if only they would sell half tickets at halls, I’d be recommending this film to all my friends.
Rating (out of five): **1/2
Posted by Anna MM Vetticad at 8:58 PM