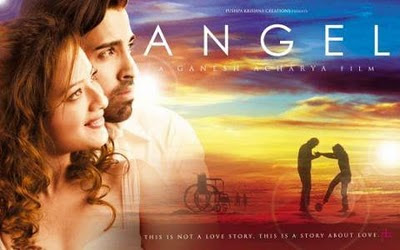 The Adventures of an Intrepid Film Critic continue. This time in a suburban multiplex far from home whose employees are fast becoming used to my solo presence in their halls, watching films that no one else wants. For Angel no one insists that I buy two tickets, but I have company in the hall – an usher, a popcorn guy, another attendant and my anger that is so palpable that it almost feels like a person.
Mind you, Angel has some big names associated with it. It’s directed by well-known Bollywood choreographer Ganesh Acharya. It features an appearance by Sukhwinder singing a closing track to accompany the end credits. And in this nepotistic industry where talentless star kids are given breaks again … and again … and again … the debutant hero Nilesh Sahay may even some day become a big star considering that the film’s pre-release publicity has repeatedly informed us that he is Sanjay Dutt’s nephew.
I can tell you Angel is meant to be a sensitive story because it’s about a boy who falls in love with a girl with a disability. I can’t tell you much about that disability though because there’s just a breezy mention of “brain trauma injury” by a doctor, with no explanation for how she came by it. Okay, I can live with that. I’m not looking for a documentary here.
I know nothing more about “brain trauma injury” than what I learnt from the Internet and a phone call to a doctor friend after watching this film. But I do know that when a film shows a friendship developing between a wayward hero and a girl with a severe disability, when the film suggests that they’ve fallen in love, when it shows them having sexual intercourse, when it shows her brother accuse the boy of rape and put him away while the girl struggles to tell them that he’s innocent, I know then that there are moral and ethical issues involved that require serious debate.
Rain Man was not a documentary on autism and Taare Zameen Par was not a dyslexiadocu. Yet both films were insightful, entertaining and sensitive.
Angel on the other hand is superficial and irresponsible. The girl’s brother and sister-in-law are shown using her disability to get a house in an upmarket locality on government-sanctioned discounted rates. They then consign her to a single-room tenement in a scruffy chawl with a horny maid to take care of her. Now there’s an issue that could have been delved into. But no, bhaiyya and bhaabhi discover Abhay and Sonal in bed (oh did I not tell you the lead pair’s names before?) because bhaiyya insists on going to wish his behna with a cake as the clock strikes 12 on her birthday. Wait ... so he’s fond of her after all, huh? But cut to the police station, bhaiyya is trying to wheedle money out of Abhay’s brother in exchange for withdrawing the complaint. Did I mention that Angel is inconsistent?
It’s also riddled with loopholes and loose ends. Abhay is shown taking Sonal to her doctor. How did he know who her doctor is when she can’t communicate with him, and he’s not in touch with her family?
Compounding the film’s problems is the fact that Sahay may have Sanju maamu’s build and lumbering walk but he has none of his charisma. And no, young man, wearing ganjis to show me your biceps is not acting.
In the midst of all this is Maddalsa Sharma playing Sonal and trying bravely to make some sense of this nonsense. In places I could actually visualise the director telling her, ‘Sridevi ko Sadma main dekha hai na? Uss type ka performance chahiye. Jaake phir se DVD dekho.” It’s also weird that the film says Sonal suffers from “brain trauma injury” while the actress herself has said in an interview that her research for the role included hospital visits to observe patients of cerebral palsy. Did someone tell her they’re the same thing?!
Still, given the probable ambiguity of the brief and the tackiness of the rest of the proceedings, hers is a performance I won’t ignore. Sharma has already starred in a handful of films in the south Indian languages. Angel marks her Bollywood debut. Well, Ms Sharma, I’d say you are rather lovely to look at, and I think I’d like to see you in more films. But for heaven’s sake pick your projects more wisely in the future!
Angel is sick sick sick!
Rating (out of five): 1/2
Posted by Anna MM Vetticad at 11:50 PM