What a darling film! Bubble Gum is about teenaged love and longing in 1980s Jamshedpur, about a brother coping with his elder sibling’s speech and hearing impairment, about well-meaning but blundering parents trying to get their sons to get along …  and it’s adorable!

Vedant (Delzad Sanjay Hiwale) is a 14-year-old living in a middle class housing complex. He is in love with Jenny (Apoorva Arora), the pretty daughter of a local policeman. Jenny seems to reciprocate his feelings but the older boy Ratan works hard to drive a wedge between them with politicking that would make Machiavelli proud. This troubled phase of Vedant’s life is further disrupted by the arrival of his 16-year-old brother Vidur (Sohail Lakhani) who lives in a hostel, but is now home on a Holi break. The boys’ parents intend no harm but end up, as many parents do, neglecting Vedant while working hard to cater to Vidur’s special needs. Bubble Gum takes us through a couple of weeks in their lives during which Vedant’s resentment towards his brother gives way to teary-eyed pain when he returns to his hostel. 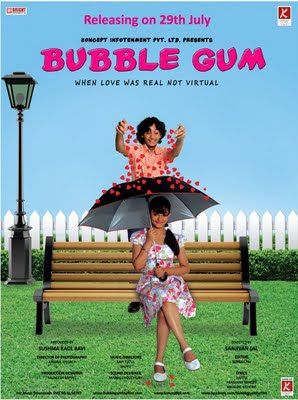 What a year it’s been for children’s films in Hindi. In spite of their flaws, almost all of them in 2011 have thrown up some incredible kiddie talent, whether it’s the heart-stoppingly good Taher Sutterwala and Chinmay Kambli in Sagar Ballary’s Kachha Limboo, the amazingly natural Partho from Amole Gupte’s Stanley ka Dabba, Chillar Party’s bachcha party and even ‘veteran’ Darsheel Safary who returned to us with the indifferent Disney offering Zokkomon. Happily for us, each of these lead players was also surrounded by a wonderful supporting cast of children. In Bubble Gum we get the remarkable Delzad Sanjay Hiwale and Sohail Lakhani who don’t seem to be acting at all, but look like someone put up cameras in their home and residential locality and said: “Okay, now pretend the camera is not there, just live out your lives.” A big round of applause please for casting director Honey Trehan, and for writer-director Sanjivan Lal who clearly has a magic touch with kids. Lakhani is deaf-mute in real life too, and the entire cast was put through a 15 day sign language workshop to help them with their performances and also to enable them to communicate with their co-star.

Mercifully, the grown-up characters in the film are as well-etched-out as the children. Vedant and Vidur’s parents (played with seemingly effortless ease by Tanvi Azmi and Sachin Khedekar) complement each other well. As you watch them, you can imagine that this couple will happily grow old together. The only jarring moment in Bubble Gum comes at a party when the children break into a really bad song that the film could have done well without. There are also certain technical aspects that should have been better handled. The lighting, for instance, seems ineffective in several places, which takes away some of the sheen from this otherwise utterly endearing film.

There’s something so gentle about Bubble Gum … no speeches, just a witness to reality. This is a world before cellphones and the Internet, when children connected on real playgrounds and not through SMS or virtual chatrooms, when too many essential items had to be ordered from the US, when even the most sincere adults would use the word “handicapped” with no malice whatsoever. With humour and sensitivity, Bubble Gum says so much about adolescence, disabilities, parenting and changing times without seeming to say much at all. This is a warm, compassionate, funny, true-to-life, poignant film.