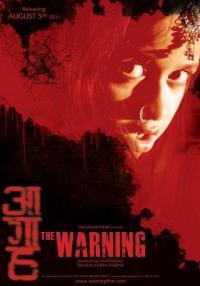 Let’s cut to the chase: Aagaah is a film about a terrorist who dies in Mumbai and returns as a ghost whose messages prove useful to Indian intelligence agencies. I’m dying to say “this review is a warning, not just a review”. But I won’t, because I can’t accuse a director of packing his films with clichés and then start with a cliché myself. After watching Karan Razdan’s Girlfriend a few years back, I didn’t think I’d ever be so amused by a film purporting to be an insight into a serious subject. Girlfriend was homophobic and prejudiced to the point of being loathsome. Aagaah, on the other hand, is so amateurish in its attempt to appear ‘secular’ that I can’t be  bothered to even get irritated with it.

Here, in short, is the story: Karan Razdan plays fisherman Ramsharan from a small coastal village in Gujarat. One day on the high seas, his boat is taken over by terrorists who intend to use it to enter India. As he breathes his last, bleeding from their bullets, he delivers a lecture on religious tolerance to the terrorist leader Azaan Khan (Atul Kulkarni). Khan is killed almost as soon as he enters Mumbai. His mulq refuses to accept his body along with the bodies of the rest of his squad who too die after a successful attack on India’s commercial capital. Cut to Ramsharan’s village where his wife (Rituparna Sengupta), parents (Satish Kaushik, Ila Arun) and daughter are mourning him when a spirit in the form of white smoke possesses the child.

So who is this ghost? Never mind really. Back when he made Girlfriend, Razdan portrayed a lesbian woman as a motorbike-riding, kick-boxing, possessive, violence-prone creature who cuts her hair short midway through the film, as if the stereotyping until that point had not been enough … and in the end, perhaps as a safeguard against possible protests by Hindu right-wingers who believe lesbianism is against our Bharatiya sanskriti, the film informed us that the lesbian was a Christian … because of course Christians are quasi-foreigners in Hindi filmdom’s textbook, so why would saffron forces object to that, right?! In Aagaah The Warning, Razdan’s terrorists are all Muslims, the Indian who sold out his people is a Muslim, but in a ham-handed bid to be balanced, there’s also a kindly Peer baba (Anupam Kher) who issues a message about how the Quran is being misinterpreted by terrorists and a Muslim ghost who explains to live terrorists that despite dying for the cause he has not attained jannat. The effort to seem ‘secular’ is embarrassingly awkward.

Rituparna Sengupta, Satish Kaushik and Ila Arun try their best to appear earnest. But it’s not enough, because of course good actors are only as good as the writers and directors of the films they star in. It’s a particular pity to see a talented Bengali actress like Sengupta being dealt such a poor hand by Bollywood.

Some of you may ask: If we could buy Vyjayanthimala’s desire for revenge in Madhumati, if we could accept Patrick Swayze’s determination not to leave this earth in Ghost, if we could stay with Bruce Willis and the child who talks to the dead in Sixth Sense, then why can we not stomach a dead terrorist who seeks the forgiveness of his victim’s widow, writes on walls and becomes a source of b) How much does Bachchan make per film?om. he'information for Indian intelligence agencies in Aagaah? Because the success of a supernatural thriller lies in being written with such polish and directed so deftly that we viewers forget ourselves, our cynicism and our rationalism while watching it. The writing in Aagaah is immature. It goes without saying that director Karan Razdan is no Bimal Roy, Jerry Zucker or Manoj Night Shyamalan; and I apologise profusely to all my readers who are offended that I referred to Aagaah The Warning in the same sentence as three classics. I’m truly sorry!