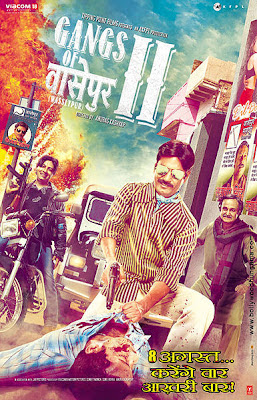 This will be a short review: Gangs of Wasseypur 2 didn’t work for me. That’s it. There’s nothing much to say beyond that. Yes, Nawazuddin  Siddiqui is a wonderful actor and commendations need to go to both director Anurag Kashyap and casting director Mukesh Chhabra (one of the best in the industry) for the choices they’ve made in both editions of Gangs of Wasseypur ... on the other hand, the entire magnificent cast has been sorely under-used in this one. Yes, the music is fun and the lyrics are cheeky ... on the other hand, some of the sheen is lost because of the sameness to the proceedings they’re meant to complement. And yes, the treatment of some of the scenes of violence did take my breath away (in particular that one involving a dying man’s beating heart, of which I will say no more in this review) ... on the other hand, monotony sets in beyond a point. And so, in the overall analysis I found the film boring, overly long and repetitive, it didn’t add any particularly new dimension to the GoW1 story, and to be honest, I don’t understand why Part 2 needed to be made at all.


Gangs of Wasseypur 2 takes off where Wasseypur 1 left off, and then moves along pretty much the same lines. Sardar Khan (Manoj Bajpai) has been killed by Sultan and his men, which leads to a continuation of the Khan-versus-Qureshi inter-family war of generations. The politician Ramadhir Singh (Tigmanshu Dhulia) continues to pull the strings from a distance. And Sardar’s son and successor Faisal Khan (Nawazuddin Siddiqui) continues – like his father before him – to be emotional and sensitive before his wife but brutal and heartless elsewhere. The violence continues to be unrelenting. And Wasseypur town in Dhanbad continues to be ravaged by the pointlessness and mindlessness of it all. Continues … continues … continues … so what’s new?


Perhaps I might have liked GoW2 more as a standalone film without GoW1 coming before it. Perhaps the repetitiveness could have been dispelled if the focus of the film had shifted entirely from the unyielding cycle of bloodshed and political maneuvering, and to the vulnerability of Faisal’s reluctant gangster. Nawazuddin has one of the loveliest faces in Bollywood right now. His slight stature adds charm to the character of Faisal who is a politely shy boyfriend yet reveals himself to be a ferocious lover to his wife; a man who weeps because he was compelled by circumstances to join a battle not of his making yet is a single-mindedly cruel don. Unfortunately the film gives us only sporadic glimpses of an intimate portrait of Faisal. The overwhelming picture is of Faisal’s actions as a ganglord alongside the shenanigans of his brothers, pretentiously named Perpendicular and Definite.


The first two films of the Godfather series – to which GoW seems like an ode – were effective because they were not uni-dimensional and the sequel took the story forward. Not so with the disappointingly dull Gangs of Wasseypur 2. As a cine buff who has immense respect for Anurag Kashyap’s work, I seriously wish he had not made this film.