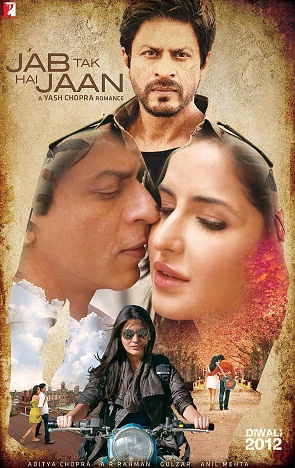 Rula diya na, Yashji, aapne? It’s a measure of the late Yash Chopra’s mastery over emotion that I found myself sobbing repeatedly through Jab Tak Hai Jaan, although three un-ignorable (if that’s a word at all) aspects of it spoilt the film for me: (1) A fun, crisp first hour gives way to an elongated second half that adds up to a whopping 178 minutes running time … I could perhaps even forgive that but (2) it’s hard to get past a 47-year-old actor playing the part of a 25-to-28-year-old man through the pre-interval portion of the film. Yes, that’s Shah Rukh Khan’s Samar Anand for you. The only thing more laughable we’ve seen in contemporary Bollywood was a 44-year-old Aamir Khan playing a teenaged student in 3 Idiots in 2009. Why, guys, why?!!! (3) And when A.R. Rahman collaborates with one of the greatest Hindi film directors of all time for the first time, you expect more than one lovely song (Challa) plus one catchy tune (Ishq shava) plus the irritatingly maudlin Saans and a couple of other numbers so boring that they further slackened the pace of the already slow second half!

Very briefly, here’s the story: an Indian ‘boy’ in London, Samar Anand grabs every job he can get because Mummy wanted him to make it big in this phoren land. He falls in love with Meera Thapar (Katrina Kaif) who routinely promises Jesus that she’ll give up something she loves in exchange for one of her wishes being fulfilled. Now Meera is a closet wild child – in Hindi filmdom that means a woman who smokes and wears sexy clothes when Daddy is not watching, while pretending to be prissy when he is. Inevitably she gives up love for a plea made to god, I won’t tell you what. Cut to Part 2 and Samar is now the Indian Army’s most sought after bomb disposal expert rubbing shoulders with a sprightly documentary film maker called Akira Rai (Anushka Sharma) and from there the story goes on … and on … and on.

To say that Meera’s vow is unrealistic would be wrong. I actually know a guy who was emotionally blackmailed into becoming a priest by his mother, because she once made a mannat for his life when he’d been on the verge of death. Truth can be stranger than fiction, and Meera’s pledge should hardly be an issue in a film where so many other odd, old-worldly things happen. Apparently if you tell god you won’t be “with” a man, you can share a house and a bed with him, even hug him, but kissing and sex ain’t allowed. SRK relaxes his no-kissing-in-films rule for JTHJ but that maiden Samar-Meera smooch (before her vow) is sterile and the camera scurries away from them so hurriedly that it feels like all parties involved were embarrassed. Better not to kiss than kiss like this!

But then there are some lovely things too that happen through Jab Tak Hai Jaan. If you think J&K, London and the English countryside are gorgeous, then you will need to coin another adjective once you see them through Yash Chopra’s eyes and Anil Mehta’s camera in this film. I enjoyed Gulzar’s lyrics for Challa and Ishq shava. And I loved the simple messages of secularism woven into the story in a fashion that’s uncharacteristically understated for Bollywood: a heroine with a Hindu name whose abode of faith is a church, with no explanation being offered to us for it; the hero’s camaraderie with and generosity towards his Pakistani roommate that is not accompanied by any speeches; a woman who falls headlong into love with a man who just happens to be Muslim, without a big deal being made of his religion. Aditya Chopra’s dialogues in the first half are filled with sparkle and wit, and there’s much fun to be had listening to Samar and Meera’s lively exchanges. Shah Rukh especially lends charm and verve to his character. SRK also looks quite sexy as an older man in uniform even though he definitely does not look just 38, which is what Samar is  supposed to be by then. And Meera’s dance at an underground party is decidedly hot. Didn’t know Katrina had it in her.

There are too many problems though. Katrina’s acting has evolved greatly since we first saw her in Boom, but it becomes evident that she still has a long way to go when she is contrasted with Anushka’s natural talent in the latter part of the film. And while Anushka’s Akira repeatedly refers to the age difference between her and Samar (he’s 38 by the time they meet, she’s 21), the so-evidently-youthful Katrina is saddled with the impossible task of convincing us that Meera is just four years younger than Samar. On the other hand, Aditya Chopra’s script dumps Anushka with Akira’s rather abrupt transformation of feelings towards Samar. And suspension of disbelief is taken to new heights when Akira prances around conservative J&K and in the midst of indulgent Army personnel in the skimpiest of clothing.


In short then, this is what Jab Tak Hai Jaan adds up to: fun first half; emotional despite its numerous flaws; and the ending did have me on edge; but … overly long and dull second half; incongruous casting; disappointing music. Yes, it made me cry in many places. But now that I’m through with watching it, it’s left me with a heartache because Yash Chopra’s last film is not even close to the best he’s given us.