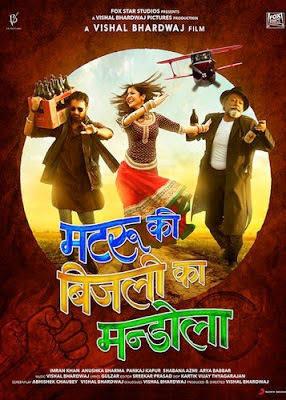 In a remote village in Haryana lie acres of fields that the local lord-of-all-he-surveys eyes greedily for industrial use. The problem is, those fields are fertile, which means the farmers don’t want to sign away their land. That lord is Mandola (Pankaj Kapoor), who is by turns a boorish, manipulative, abusive schemer or a gentle soul, kind employer and adoring father, all depending on whether he’s sobre or drunk. The possibilities here are endless. Add to the scenario Mandola’s feisty, phoren-returned daughter Bijlee (Anushka Sharma); his New Delhi-returned right-hand man Matru (Imran Khan) who is in love with Bijlee; the cold-hearted politician (Shabana Azmi) who plays footsie with Mandola; her often witless, always wicked son Baadal (Arya Babbar); and what you get is an array of eccentric characters played by an array of interesting actors, and a fertile playing field for Vishal Bhardwaj.

Oddly though, Bhardwaj – one of Hindi cinema’s best directors today – takes the abundance of riches at his disposal and delivers an unfortunately inconsistent film. His screenplay co-written by Abhishek Chaubey maintains a deliberately bizarre tone that is hilarious in places and persistently over-the-top. But OTT, like coolth, is effective only if you don’t seem like you’re trying too hard, and too often it feels like MKBKM is trying way too hard. So yes, that pink buffalo is a killer, those gobar bombs are a hoot, there’s a delicious swipe at pretentious Communists stuck in a time warp … and Pankaj Kapoor sinks his teeth into the most well-fleshed-out character in the film, tears into it with his canines, chews it and chomps at it with obvious delight to deliver a darling performance. Nice touch too with the introduction of a group of fabulous Zulu dancers from South Africa and the casual mention that they were “purchased” without their knowledge. This is a film that not only cares about the rights of poor Indian farmers; it cares about the outside world too, which is rare for Bollywood. The choreography is a big plus. And while the music is not the best we’ve heard from Bhardwaj the composer, it’s enjoyable, especially the title track and the exuberant Oye boy oye boy Charlie.

Yet it does not all come together into a cohesive whole. The problem primarily lies with the people around Mandola. Azmi is chilling in moments of undisguised malevolence, but strikes a discordant note with her farcical scenes. Khan is more convincing here than he’s been in the past, but is given more screen time than depth of character.

The most implausible of the players in this story though is Bijlee. No doubt there are women in rural India breaking norms, defying social convention and surviving against all odds. Yet anyone who knows Haryana would wonder at this fictional village where a female human – even if she’s the pardes-educated daughter of a millionaire – could casually wander around in public at all times of day in perennially shoulder-revealing attire, or emerge from a pond with her water-soaked blouse clinging to a tantalisingly red bra, without at least raising eyebrows if not being lynched. If it was Bhardwaj’s aim to be cheeky and ironical here, he does not pull it off. Sharma’s natural talent comes to the fore in the relationship with her father and in an outlandish drunken scene, but it’s clearly tough for her to rise above the uneven writing and direction at hand.

So there you have it … MKBKM’s effort to be joyously absurd is too obvious and the usually assured Bhardwaj seems to be playing fast and loose with the reins in his hands. That other Imran-starrer, 2011’s Delhi Belly, achieved the entertaining weirdness and delightful idiosyncrasy that this film seems to be aiming at, but Delhi Belly worked because it was uniform in its tone and not working so hard to impress. Sure it featured lots and lots of abuses and farts, but there was more to the film than just gas and gaalis. Yeah yeah it’s amusing that MKBKM’s Mandola says Pancho pancho as often as you and I might use the definite article, but there’s too much else that falls flat. From a usually non-sexist film maker, it’s also disappointing to catch a joke about an overweight woman and a bhains.

It’s mixed feelings then towards Vishal Bhardwaj’s Matru Ki Bijlee Ka Mandola. On the one hand: Can this erratic film be from the genius who gave us Maqbool and Omkara?! On the other hand: thank you Mr Bhardwaj for giving Pankaj Kapoor such a vast canvas and the space to simply let go. To that I say, oye boy oye boy indeed!

PS: You know that Haryanvi ensemble Bijlee wears in the climax? I’m dying to add it to my wardrobe!