WARNING #1: THIS REVIEW IS FOR ADULTS ONLY:

WARNING #2: LOTS OF SPOILERS AHEAD: 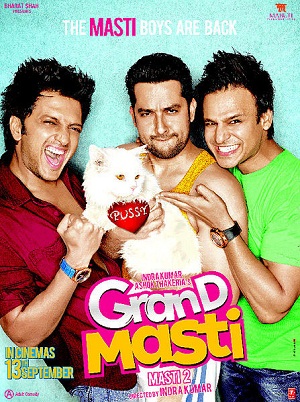 A for arses, B for boobs, C for chooths … That’s the English alphabet according to the three heroes of Grand Masti, except that they don’t even have the guts to say those three words, so “A for” uttered by one of them is followed by shots of an array of female bottoms, “B for” is followed by an array of female chests in skimpy clothing displaying lavish cleavage, and “C for” is followed, not by visuals, but by a hurried add-on comment: “guess you’ve already got the picture.” Okay, so they draw the line at vaginas?

Yeah yeah, I’m uttering the words. Improper, did you say? Then you’ve missed the point I’m trying to make. Here’s the thing: methinks there’s no better indication of our Great Indian Hypocrisy than that a film like Grand Masti, replete with the most unsubtle double entendre I’ve seen and heard in a recent mainstream Hindi film, doesn’t have the guts to actually spell things out in black and white; and though the constant allusion throughout is to the body parts and sexual frustrations of the heroes and heroines, not once is anyone shown actually having sex. Oh no no no, that would be so non-kosher, now wouldn’t it? So completely against Indian culture, no? In The Gospel According To Director Indra Kumar, calling a busty woman “sthan-ing”, not stunning, is okay (FYI non-Hindi-speaking readers, “sthan” is a Hindi word for breasts); constant discussions about milk in her presence are okay; but god forbid that we should be shown anything but bodies covered by bedsheets and quilts to indicate the act of human copulation. See, I said a bad word again! C-o-p-u-l-a-t-i-o-n! Hawww!

As we all know by now, male marital infidelity is a constant source of humour for Hindi films. If a heroine sleeps around, we get a gritty, ‘thinking’, socially conscious film like BA Pass, because of course female promiscuity is no laughing matter for the male-dominated audience. When men sleep around though, what we get are No Entry and Grand Masti. So this is a story of three husbands who decide to get some action when they go off to a college reunion without their wives. There they meet three horny, half-clad women called Rose, Mary and Marlo. Their efforts to get into bed with these three and later to escape the man in their lives in addition to the suspicion of their own wives is what the film is all about.

Let’s be clear here: I’m not against irreverence. I’m not against being offensive either. Point is, crudeness comes easy, offensiveness for the heck of it comes easy; irreverence, on the other hand, requires imagination and intelligence. One of my favourite American serials running on Indian television right now is Two Broke Girls which is offensive to men, offensive to women, offensive to blacks, whites and Asians, tall people and short people, gay and straight people, fat and thin people, and pretty much every majority or minority group I can think of. The show’s creators Michael Patrick King and Whitney Cummings are constantly pushing the envelope with their humour, but that humour never descends to kindergarten level. Grand Masti never rises above KG though.

And so, while there are a handful of scenes that did make me laugh in spite of myself (I counted five such in 135 minutes), for the most part what the film delivers is a complete lack of IQ: A college boy is castrated by his principal, but later surfaces with a massive bump in the crotch area that we soon discover is filled with air. That part is marked out by a big golden patch on his small, tight shorts. Why? Who knows? A statue gets erections when it sees hot women. Okay, funny. But then it happens a second time. And then one more time. And then another time. Oh, c’mon! Prem’s idea of kinky sex with his wife is to wear something that looks like a rat’s head appended to his penis area. Why? No idea. As it happens, right at that moment there’s a cat in the bedroom who sees red and attacks the rat. Now that cat belongs to Amar’s bhabhi and is called Pussy which – of course! – gives people an excuse to say “bhabhi ki Pussy” several times. In another extended scene involving shadow play, a woman reaching into a large bag and pulling out various things is positioned to look like she’s pulling out all those items from Amar’s “nether yeyya” (pardon the spelling), to borrow a term I picked up when Amy Farrah Fowler in The Big Bang Theory quoted Chaucer’s A Miller’s Tale.

Now let’s come to the film’s rape joke, for after all how can you have a Bollywood comedy without a rape joke? Rape is so funny, na? If the mighty 3 Idiots could have that lengthy balaatkaar speech, if Jab We Met could get Kareena Kapoor and Shahid Kapoor to chuckle about rape, how can we expect anything less of Grand Masti? At least these guys don’t stretch the joke beyond a sentence. At one point in this film, in the exact tone in which he has cracked all the stupid jokes until then, one of the men says: “Balaatkaar se yaad aaya, meri biwi kaha hai?” Why? Because it is okay to speak of rape in jest, I guess? Yes I heard you loud and clear, those of you who think I’m a humourless feminist. Here’s my answer: I love irreverence, I enjoy equitable sexism, I’m not one of the people demanding an end to item songs, all I ask is many more such numbers with shirtless and pantless John Abrahams, Hrithik Roshans and SRKs. Jokes about rape, however, I will never understand. What’s amusing about one of the vilest crimes a human being can commit? Those of you who condone rape jokes, would you also condone jokes about the Jews in Hitler’s concentration camps or the Hindus killed in the Godhra train burning or Sikhs burnt with tyres placed around their necks in the 1984 riots or Muslims hacked to death in Gujarat in 2002? If these acts of cruelty don’t amuse you, could you please explain what’s so amusing about a man forcing his penis into an unwilling woman’s vagina?

Gentlemen who think rape jokes are funny, I’d request you to read this article titled “The Rape Of Men” in the UK’s The Guardian newspaper and then tell me honestly if you will ever again make wisecracks about sexual assault. It’s not so amusing, is it, when it’s not happening to “the other”? As for ladies who are tickled by rape jokes: in the name of your absent self-respect, I’d urge you to find other ways of scoring brownie points with your gentlemen friends and being “one of the boys”. Yes, I’m being judgemental. No apologies.

The difference between Grand Masti and most other sleazy Hindi films of this genre is that this one dehumanises not just its heroines, but its heroes too. The women of GM are never more than a sum of their breasts and buttocks. The men here have their entire beings centred around their penises. Watching this film, I wanted to take a moment to mourn the loss of Indra Kumar, Vivek Oberoi, Riteish Deshmukh and Aftab Shivdasani. Indra Kumar is the man whose film Raja is eternal proof of what a live wire Madhuri Dixit can be in an over-the-top, out-and-out comedy. Given the right material, Riteish is capable of being inexorably funny. Remember Vivek from the pre-Salman-Khan-press-conference days? Remember the buzz around that young actor brimming with potential in Ram Gopal Varma’s Company? And Aftab… my god he was once a Farex baby! Look what life and Bollywood have reduced them to. Grand Masti is a Grand Embarrassment.