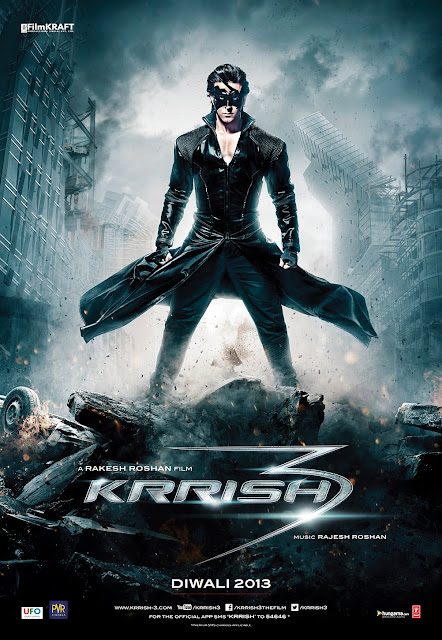 “Congratulations, beta hua hai,” says the nurse to the beaming Priya and Krishna Mehra in a hospital room towards the end of Krrish 3. Imagine instead if the line had been, “Congratulations, beti hui hai.” Now that’s what could have elevated Rakesh Roshan’s film from merely being fun to something extraordinarily pathbreaking, special and brave. Alas, like pretty much every Hollywood superhero flick to which Krrish 3 pays tribute, here too legacies and genes are passed on only from father-to-son-to-grandson instead of from parent-(mother/father)-to-child-(daughter/son)-to-grandchild-(granddaughter/grandson). And sadly, the bravery in this project is only a remnant of the risk Roshan Senior took when he entered a heavily-special-effects-laden sci-fi-superhero genre with Koi Mil Gaya in 2003. Ten years on, he brings to us the third film in the series, a play-it-safe even if highly entertaining film.

Krrish 3 takes off where Koi Mil Gaya and its sequel Krrish left off: Rohit – an elderly version of the mentally ‘slow’ genius from KMG – is now living a happy life with his son Krishna in Mumbai. Rohit works in a scientific research facility in the city. In his spare time he is immersed in a personal project to harness the sun’s rays through mirror arrangements to revive dead beings. Krishna is repeatedly fired from paying jobs since most of his time is spent saving the world from tragedies in his masked superhero avatar Krrish. Their family is completed by Krishna’s journalist wife Priya who we first met in the second film.

In a snowy land far away lives Kaal, a wheelchair-bound evil scientist with telekinetic powers who creates lethal viruses, deliberately causes epidemics, then earns millions by selling antidotes for those very viruses. Kaal is aided in his work by an army of mutants he created by fusing human and animal DNA, calling them maanvar (= maanav + jaanvar). Among them is the chameleon-woman Kaaya. When Rohit develops an antidote for a virus in India before Kaal’s antidote hits the market, the bad guy is enraged and makes it his mission to find out more about the Mehras and his mysterious link with them. And thence all hell breaks loose.

It becomes obvious what’s in store for us when in the opening minutes: (1) Big B’s voiceover providing a flashback to the first two films describes Rohit, with ill-chosen words, as “abnormal” (2) we meet Krishna and Priya looking stunning in their nightwear (he topless, actually) and (3) it soon rains adrenaline as Krrish emerges in his caped and masked glory, zipping across the city to prevent a plane crash. This then is what the film offers us throughout: not much intellectual finesse, handsome people, top-notch home-grown special effects (it felt good to see them credited to SRK’s Red Chillies VFX, Mumbai) and excellent action. Rajesh Roshan’s songs, it must be said, are a yawn. Making matters worse are the dated lyrics of God Allah aur Bhagwan ne banaaya ek insaan, reminding us that Bollywood remains convinced to this day that the God of Christians speaks only English, the God of Muslims speaks only Arabic and Hinduism’s many deities are Hindi-bhaashis. The disco Raghupati Raghav Raja Ram is interesting in the way it evokes the celebratory nature of Hindu worship, but the song does not rise above being lively.

On the face of it, Krrish 3’s USP is its special effects. But look closer and it’s clear that the entire series would be nothing without Hrithik Roshan. In this film he switches from Rohit to Krishna to Krrish with more conviction than the written material might have inspired in a lesser actor. Of all Bollywood’s reigning male stars today, Hrithik is the one equipped with the kind of versatile face and killer body (not overly ripped as it was in Kites) that could be equally convincing as a superhero, a towering figure from Indian history or a contemporary regular Jo. Personally, I’d love to see him play Ram, Krishna or Jesus in a film. It goes beyond his natural talent and incredible looks though. With the flawed Krrish 3 he proves that he has overcome his initial weaknesses & evolved into one of the best male actors in the industry.

Playing his wife here is one of the best female actors in the industry, which is why it’s a telling statement on the position of women in Bollywood that Priyanka Chopra is relegated to a mere hanger-on in this film. Kangna Ranaut’s impossibly curvaceous, vicious yet vulnerable Kaaya has greater substance. When she has sexual fantasies about Krishna, the director substitutes her thoughts with a sanitised song, I guess because he wanted a U certification. Despite that embarrassingly bad number sung in a desert, Kaaya remains an enigmatically appealing creature throughout. Kangna also seems to have worked hard on her accent and voice modulation, which have been her Achilles heel in recent years. With this film, the Roshans have compensated her for the shabby treatment they meted out to her character in Kites in 2010. Viveik Oberoi’s Kaal is a mixed bag though. The actor does his best, but the laboured explanations about his background and the director’s evident effort to summon up a sense of ominous grandeur around him end up slowing down the film in all his scenes. Especially dull is the scene in which a metallic body suit envelopes Kaal, so reminiscent of Yashida’s equally dull emergence as the Silver Samurai in this year’s The Wolverine.

That’s not the only scene here that is a reminder of a Hollywood superhero flick (though let's be fair and admit that when Hollywood superhero flicks resemble each other, we Indians tend to complain a lot less). Krrish 3 repeatedly crosses the fine line between inspiration, imitation and an ode. It’s hard to understand why that was necessary since there was more writing depth, flesh and originality in both Koi Mil Gaya and Krrish despite the evident inspiration from ET and Superman/Batman.

Hollywood superheroes come to us against the backdrop of their comic-book mythology. A Bollywood superhero has thousands of years of Indian mythology to dip into. The Krrish-Kaal equation harks back to Arjun and Karna from the Mahabharat. At one point a character draws a parallel between Kaal’s mutants and Ramayan’s Shurpanakha. There is potential here, but the screenplay by Akash Khurana, Honey Irani, Irfan Kamal, Rakesh Roshan and Robin Bhatt seems determined to keep it simple with what appears to be an eye on a very young audience.

Thing is, children are far more intelligent than we give them credit for. Besides, some of the best children’s films have offered layers of meaning to adults. Oh well, with all its blemishes, Krrish 3 still has a lot to offer: a loveable, beautiful-looking superhero, an intriguing female antagonist, hugely entertaining action sequences, the promise of a Krrish 4 and these words from Priya that are worth holding on to, “Krrish ek soch hai jise koi kaal nahin maar sakta”.