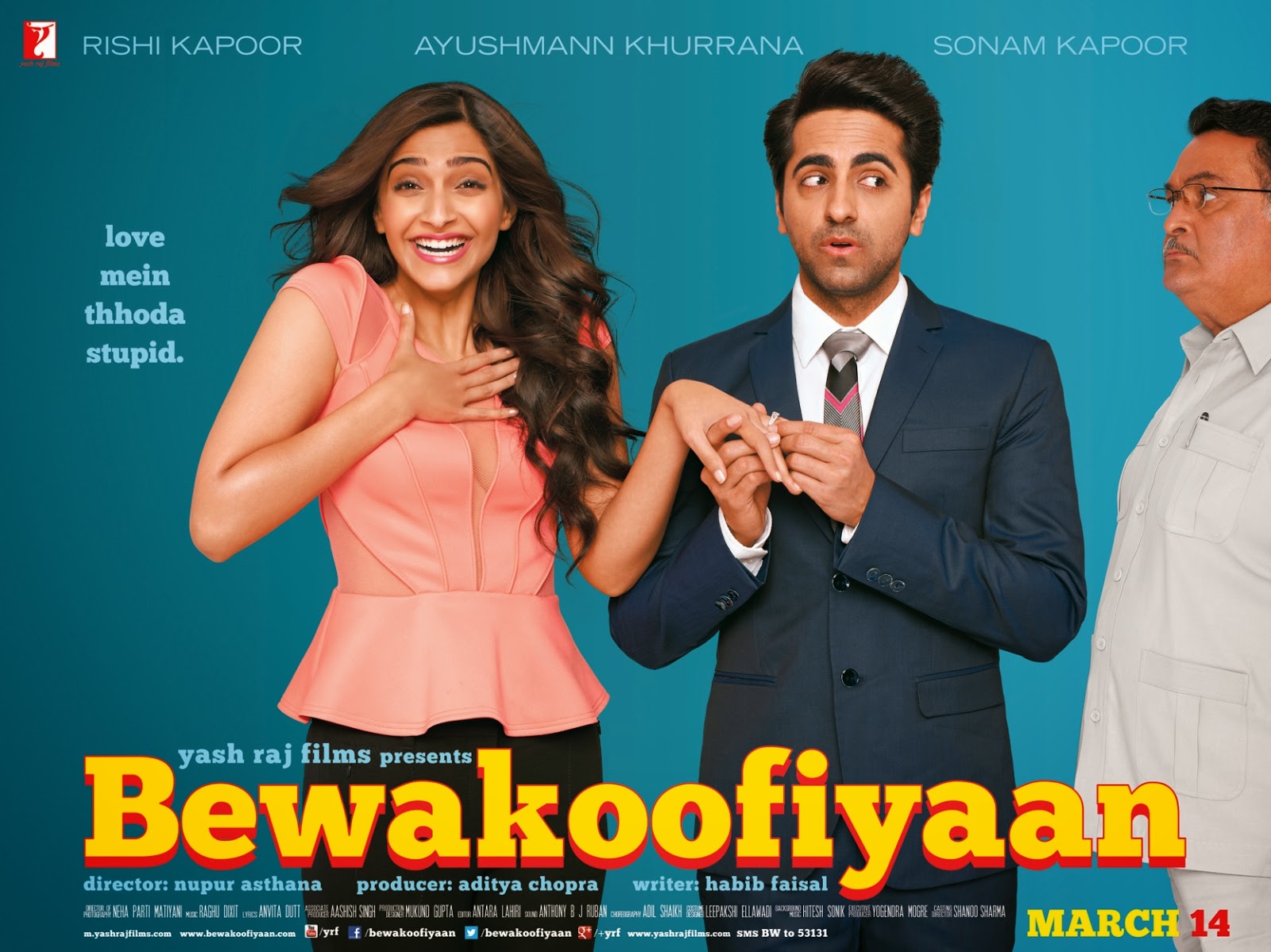 “Slim” is a desirable adjective when what’s being described is a human midriff, a new laptop or cellphone design. As slim as Sonam Kapoor’s waistline – that’s a compliment to the lady. As slim as Bewakoofiyaan’s storyline – not.

Director Nupur Asthana’s second venture as a film maker does not live up to the expectations raised by her credentials as a successful and established TV writer-director, or by her fun first film MujhseFraaandship Karoge. MFK was crisp, pert and packed with both action and entertaining realism. Bewakoofiyaan, on the other hand, peters out after a promising first hour. It’s engaging while the going’s good, inoffensive once it loses its fizz, visually appealing throughout, and average overall. Not bad not good is just not good enough coming from Asthana, especially considering the team she’s bagged here, including writer Habib Faisal whose filmography includes the screenplay of that fantastic 2010 film Band Baaja Baaraat plus Rishi and Neetu Kapoor’s comeback film as a couple, Do Dooni Chaar which he wrote and directed.

Bewakoofiyaan stars Sonam as Mayera Sehgal and Ayushmann Khurrana as Mohit Chaddha, two rising corporate types in Delhi who are very much in love. They’re both earning well and prone to spending all they have. Mayera is addicted to shoes and clothes, so it’s a good thing she brings home a hefty pay cheque. Mohit is no better, and like too many 20-somethings out there today, blithely spends off a credit card without worrying about the effect on his bank balance.

The third angle in this economic triangle is Mayera’s dad (Rishi Kapoor), the equivalent of financial chalk to their cheese. V.K. Sehgal is a retired senior bureaucrat who values money very differently – he’s thrifty without being miserly, and comes from a generation which was taught to save for a rainy day when the monsoons are many months away. What happens to the equation between these three when an unexpected cash crunch visits one of them? Will relationships suffer? Can love survive? These are the questions that Bewakoofiyaan seeks to answer.

The first half is credible, as are the two youngsters, but Asthana and Faisal have little to add in the second half. Besides, though Mayera and Mohit are real, Mr Sehgal is a hyperbole of a human being. The character might have worked in a film that aims at a melodramatic tone, but Bewakoofiyaan is not such a film. As a result, Mayera and Mohit’s tolerance of the old man’s utter rudeness and meanness to Mohit are hard to digest. Far from being funny, which is what it’s meant to be, his behaviour borders on the offensive. Yeah yeah, we know fathers are suspicious of men who date their daughters; we know doting dads are tough on potential sons-in-law (if the guy is their darling girl’s own choice) but this man is just plain obnoxious and I can’t possibly imagine a feisty girl like Mayera or a self-respecting chap like Mohit swallowing his nonsense.

With the advantage of better-written characters, Sonam and Ayushmann invest them with believability and charm. It's such a joy to see a strong heroine with a substantial career in a Hindi film. The two actors look good together too. Besides, Sonam is stunning and has a wardrobe to die for in this film, as she does in most of her films. What she needs to guard against though is being typecast as the spoilt rich kid on and off screen. Please don’t point me to films that have been different. Perceptions count for everything in showbiz, and if she does one more film in which we see her shopping for designerwear till kingdom come, she’s harming her CV.

The music of Bewakoofiyaan is nowhere as gripping as I expected considering that the talented and offbeat Raghu Dixit is the composer. Gulchharrey is the most appealing of the songs (sung by Benny Dayal whose diction I find attractive). Both Gulchharrey and Khaamakhaan are well shot. Habib Faisal’s lyrics for Khaamakhaan encapsulate the film’s story: the girl in the song tells the guy not to worry about money but he seems convinced that she would not want him if he went broke, although he has no evidence to support his fears since Mayera is financially independent and does not treat him like an ATM. She sings: Khaamakhaan jod-tod kare / Khaamakhaan pai pai pe mare / Khaamakhaan yaar pyaar se dare / Khaamakhaan mujhe kare kyun pare… Jo toofaan aaya, bistara utthaaya /  Dil khaali karke tu chala. He counters that with: Tere dil ka kiraaya / Jo bhar nahin paaya / Toh kar degi mujhko dafaa.

Wish the film had explored that theme with greater depth. The truth is that young men these days are often foxed when they meet women who don’t need them for financial security. It’s not easy to make the journey from watching your mother take money from your father all her life, to your girlfriend who earns enough to support both of you. If Mayera had lost her job, how differently would she have reacted to a situation of dependence, however brief, on her boyfriend? Mohit is clearly a liberal, yet is there not a gender angle to the way he unravels when financial difficulties arise? And if she gets a plum posting abroad, why doesn’t a woman as broad-minded as Mayera consider asking the man in her life to join her and to relax while he bides his time searching for a job in the same city, as most men would have automatically suggested to their female partners? Is Mayera not as liberal as she appears, or is she pre-supposing unrevealed insecurities in him?

If Bewakoofiyaan had dug deeper around these questions, it could have been something special. As things stand, it’s not bad but not good either.
.
Rating (out of five stars): **1/2

Posted by Anna MM Vetticad at 8:56 AM