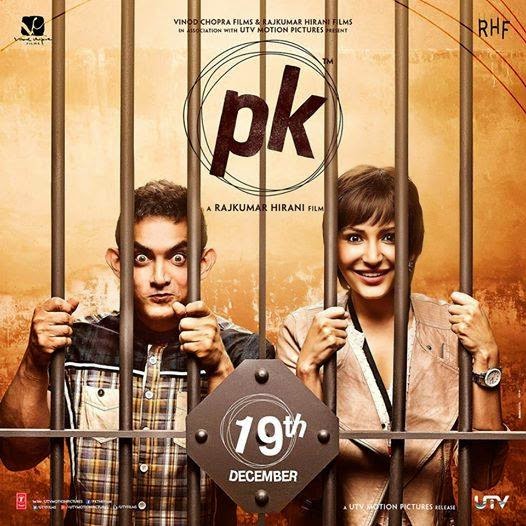 Rajkumar Hirani’s PK is what Umesh Shukla’s OMG Oh My God! might have been if the chap questioning organised religion had been an innocent extra-terrestrial instead of a cynical human.

PK is what Hirani’s own Lagey Raho Munnabhai might have been if all that worldly wisdom had flowed from an artless alien rather than a golden-hearted goon inspired by visions of Gandhiji.

What then is PK? It’s a film about an ET called PK (Aamir Khan) who comes to Earth to research human life, and gets stuck because the device to call back his space ship is stolen as soon as he lands. As he figures out a way to recover it, he discovers the complexities of life on this planet, the difficulties of communicating with creatures who don’t speak their minds and, above all, the God fraud. He is aided in his quest to return home by journalist Jagat Janini Sahni a.k.a. Jaggu (Anushka Sharma) who has a painful history of her own.

PK is delivered in light-hearted packaging, but make no mistake about this: it is serious fare. Hindu-Muslim tensions, the so-called ‘love jihad’ campaign, fraudulent babas, scare-mongering religious leaders, Indo-Pak suspicions, blind faith, media sensationalism and above all else, the unexpected ways in which the best of us are unwittingly influenced by the prejudices of others – Hirani and his co-writer Abhijat Joshi have something to say about it all.

Shantanu Moitra’s music is attractive, the songs are smoothly woven into the narrative and nicely shot, the dialogues and lyrics are amusing and incisive, the settings are eye-catching, the costumes are colourful, the pace is unflagging and without being overwhelmingly so, there is no let-up in PK’s glossy feel throughout. None of this subtracts from its courageous core.

Mainstream Hindi films are notorious for community stereotyping. It is a measure of Hirani and Joshi’s skills that for the most part, PK skips cliches. Two populist stereotypes merit a mention though, since they depart from the film’s otherwise across-the-board slamming of religions and seek to subtly establish distinguishing marks. First, a terrorist group aims to protect its “qaum” in the film – we are told this without their religion being named. The use of the word “qaum” is clearly an effort to reference Islam without openly saying so, which makes this an instance of double triteness since it perpetuates the prevalent “all terrorists are Muslims” assumption plus links a language to a religion. Second, Christianity has many weaknesses, yet PK chooses to highlight the penchant for conversion, thus playing to the gallery with the prevalent falsehood that Christians and Muslims are the only ones who seek to convert those of other faiths.

I suppose Team PK needed something to excuse itself in case of an attack by saffron groups complaining about the slamming of Hindu religious practices in the film. Besides, Muslims and Christians are not guiltless in these matters, so let us let this pass after a mention.

A couple of costume and language stereotypes elsewhere indicate disappointing laziness. For instance, in a multi-religious assembly, the Christian is the only one who speaks English. Yet, the writers are certainly not uninformed, as is evident from the fact that PK is one of those rare Bollywood films that uses the Hindi word for a church (girja) and extends itself beyond the Hindu-Muslim-Sikh-Isaai line-up to include a Jain. Little touches that merit big applause!

The film’s major flaw though is its all-or-nothing stance on religionists. Is it possible that there is not a single preacher out there who is a good soul? PK’s absence of nuance in this matter is in line with Hirani’s 3 Idiots according to which India’s education system is absolutely, unutterably bad without any redeeming factors whatsoever. Caricatures (like that tacky scene featuring a Hindu baba in saffron robes fleeing a stage) are so much easier to sell than subtlety, are they not? Moderation is so much harder to popularise than extreme positions.

As our alien hero might say, hum frustrate-iya gaye hai ee sab se, because this film has so much else to recommend it. In the present atmosphere in India, it’s nothing short of bravery to openly discuss the failings of religion, and PK manages to do this in a highly entertaining fashion. This would not have been possible without the excellent cast headlined by Aamir who does not for a second allow PK’s distinctive body language and hilarious Bhojpuri accent to dwarf his character’s sincerity and guileless charm. That wide-eyed, big-eared look that seemed so odd in the promos is a perfect fit within this screenplay. And it’s heartening to see a superstar gutsy enough to allow the camera to let him come off looking physically less attractive than a co-star, yet Aamir does that throughout, but especially in that scene in which the awkwardly proportioned PK dances with Jaggu of the model-like figure and endless legs. Bravo!

With PK, Anushka proves yet again that she is one of the most dependable mainstream heroines of her generation in Bollywood. Someone please tell her too that she’s naturally pretty and should not have made those distractingly obvious alterations to her face. The actress shares a warm chemistry with Sushant Singh Rajput who makes his mark despite the briefness of his role. The rest of the cast too are spot on. As for the ending – ah, how it made me smile.

PK is not as brilliant as Hirani’s Munnabhai 1&2, but it’s still an excellent film that throws up surprises every step of the way. It had me laughing out loud then crying like a baby. It broke my heart then raised my spirits. If I were a Bollywood writer, I might have ended this review with: Lagey raho, Rajubhai. I’ll just leave it at: Thank you for the Christmas gift, Team PK.

Posted by Anna MM Vetticad at 9:43 AM