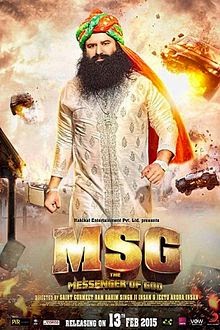 Dan Brown does not know this, but ‘Saint’ Gurmeet Ram Rahim Singhji Insan has been deeply influenced by him.

More on the Da Vinci Code writer later. First let me get this out of the way, please. Hehehe.

ROFLMAOBTPWBBTFIFFWTYCPHI (rolling on the floor laughing my ass off because the promos were bad but the film is far far worse than you could possibly have imagined). Hehehe hehehe hehehehehehehehehehehe.

If you thought Narendra Modi’s jaante-ho-main-kaun-hoon suit – that suit with his name stitched all over it – was the finest instance of megalomania and narcissism the world has ever seen, then you clearly have not watched this film.

MSG The Messenger tells the story of ‘Saint’ Gurmeet Ram Rahim Singhji Insan, the controversial head of the Haryana-based religious/spiritual organisation/sect (take your pick) Dera Sacha Sauda, who plays himself in the film. Singh has been in the news over the years for various reasons, but this bizarre film’s bizarre promotional videos, its clash with the Central Board of Film Certification (CBFC) and the reported protests against its release by certain Sikh groups have put the national spotlight firmly on his head.

A disclaimer appears on screen at the start of MSG which states: “This is a work of fiction and no claim is made of any individual possessing any  miraculous power. The film is not intended to hurt any religious sentiment of any sect, community or any religion.” The film then proceeds to contradict those words by portraying Singh as a real-life guru with magical powers, Superman-like strength and a magnetic personality. He can fly. He can absorb electricity in his hands. He can pull weights that dozens of men cannot. He performs all sorts of tricks. And we are repeatedly told he has 5 crore followers. “Pitaji, aap toh poorey desh ka youth icon hai,” says a neta to him with folded hands. Really?

MSG The Messenger is a laughable hagiography that thinks it is a serious documentary. What makes it stomach-achingly, hiccup-inducingly hilarious though is that it is Singh’s own ode to himself. Singh not only stars in the film, he has also co-directed it (with someone called Jeetu Arora Insaan), written the story, screenplay, dialogues and lyrics, composed music and sung songs for it, and is the co-art-director, co-choreographer and co-director of photography. Apparently he used his magical powers to stand behind the camera and in front of it at the same time.

The bigger joke though is that the ‘Saint’ does not realise he’s making an absolute fool of himself. He  struts about the screen as though he’s a hot model, wearing laughably loud technicolour outfits that emphasise his stocky frame, ample middle and furry arms (be warned: he is in sleeveless tops most of the time). He even gets a pretty firangi girl to giggle, bat her eyelids and say, “Kya karein, Pitaji? Aapse pyaar ho hi jaata hai.” Ewww!

Singh’s disciples apparently address him as “Pitaji (father)”. Why would a woman use a paternal epithet for a man while sending him coyly flirtatious vibes? Because she’s a terrible actress? Or because the screenplay is all mixed up in its intentions?

And mixed up, it is. Because Singh has no doubt designed it as a propaganda piece to spread his ‘message’ across the world, but has turned himself into a laughing stock instead.

The story, for what it’s worth, is about how the drug menace in India has been curbed by the emergence of this great ‘saint’ who has influenced millions to give up their addiction. The druglords of the world decide to assassinate the guru. Cut to Dera Sacha Sauda’s ashram in Sirsa, Haryana, where crowds gather to hear Singh speak, watch him perform at rock concerts (I swear, I’m not making this up!) and to do good (donate blood, clean filthy streets and so on) at his command. As Singh goes about his business in sundry garish clothes, he manages to foil all assassination attempts.

I have no idea why some people protested against the release of this film, claiming that it will “hurt religious sentiments”. I must confess though that MSG has “hurt” my “sentiments” as a film buff, and this review is a protest against horrible cinema, horrendous self-indulgence, auditory and visual violence, tackiness and unadulterated ugliness.

‘Saint’ Singh cannot act for peanuts but he is in 90 per cent of the film’s scenes. He has a stodgy gait which he seems to think is a catwalk-worthy swagger and so we are served scene after scene in which he walks into the camera in the way dashing masala film heroes do. His limbs are poker stiff but he insists on leading several dance sequences. He repeatedly describes himself as a “fakir” yet throughout MSG he is attired in flashy, shiny clothes bearing massive gaudy patterns. He has a lousy voice but he insists on croaking out several songs that cannot be salvaged even by the chamatkaars that modern-day recording studios are capable of.

As for the Dan Brown connection I mentioned at the start of this review… Remember that scene from Angels and Demons in which the Camerlengo takes a bomb up in a helicopter and ensures that it explodes in mid-air while he parachutes to safety, thus saving the lives of a massive crowd gathered in the Vatican? MSG The Messenger shamelessly lifts that scene, except that ‘Saint’ Singh does not need a chopper since he can fly.

While I was writing my book The Adventures of an Intrepid Film Critic, I encountered several self-indulgent individuals who had financed films to star in them; some were so bad that I remember laughing my head off while I watched them. Click this link if you don't believe me (link). I did not laugh through MSG The Messenger though – I sat through its 197 minutes running time frozen in open-mouthed disbelief.

A human being actually made this film about himself and then released it in theatres so that the entire world could see it!

The English remix of the song comes armed with these lines: “Without you any other, never never… / Forever you are my heartbeat / Another name is beat my heart, never never.”

So convinced is ‘Saint’ Singh of his greatness, that he actually has a woman in the film singing to him a song titled Papa The Great.

So oblivious is he to the world outside, that he appears on screen at one point in a red, pink, green, yellow and purple knitted, form-fitting, sequined top and pedal pushers, with a wreath of red flowers on his head. Movie critics of the 1980s should gather outside Govinda’s home to beg his forgiveness for having mocked his mustard trousers and whatever else they called “Govinda pants”. As for me, I prostrate myself before thee in penitence, dear Prabhu Deva, for having ever grumbled about the loudness of your colour palette. No one, I say no one, can equal ‘Saint’ Gurmeet Ram Rahim Singhji Insan’s blinding rainbow of sartorial choices.

And he has followers! In real life! Yes he does!

Methinks I know why those protestors are so angry. MSG is an assault on the nation, an act of war on the viewer and is bound to hurt the sentiments of razor manufacturers worldwide.