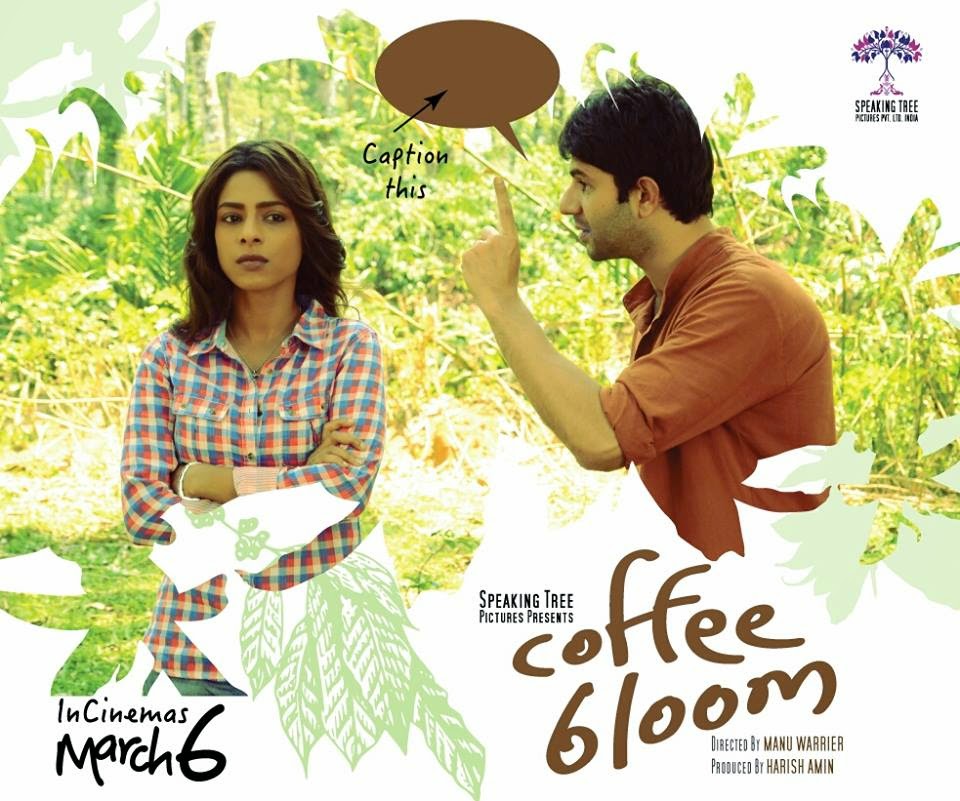 Coffee Bloom is a small, charming even if inconsistent film about a young man letting his life slip away in bitterness over an incident in his youth. Director Manu Warrier tells his tale armed with three talented actors and one of the most gorgeous settings in India: the coffee plantations of Coorg in Karnataka.

The story revolves around Dev Anand Cariappa (Arjun Mathur) who spends his time listening to clichéd recorded sermons about the meaning of life, as he wallows in the lingering misery of an old romance gone terribly wrong. Dev claims to be a sanyasi, but has to deal with the surfacing of his worldly desires when a tragedy takes him back to his old family estate – which now has a new owner – in Coorg. There he meets his former girlfriend Anika (Sugandha Garg) and her husband. As he works at his job on a local estate, he must confront his feelings for her and his own desperate need for closure over the incident that tore them apart.

The circumstances surrounding their broken relationship are told in instalments through a series of flashbacks. The incremental revelations form an interesting element in Coffee Bloom. Equally attractive are the three central performers – Mathur, Garg and Mohan Kapur playing Srinivas Panicker, the boss of the plantation on which Dev takes up temporary work.

The ever-reliable Mathur – earlier seen in Luck By Chance, I Am, My Name Is Khan and several author-backed roles in high-profile ads – is convincing as always as a flaky, immature fellow borrowing pretentious phrases for everyday conversations from those sermons he listens to; an emotionally ravaged young man masking his silent screams for revenge with a veneer of renunciation. He comes across as a person who probably pictured himself playing the part of a tortured soul/tragedy king and then did such a good job of it that he became the man he was playing, a man who just cannot let go of the past.

Garg is a familiar face as the excellent actress who played Imran Khan/Jai Singh Rathore’s close friend in Jaane Tu Ya Jaane Na. Not only is she talented, she’s also exceedingly good-looking. It’s a mystery why we don’t see her more often in mainstream Hindi films. Kapur turns in an interesting performance as the ebullient, slightly dense, but well-meaning Srinivas who does not know the ‘c’ of coffee or the ‘oo’ of oogaana (cultivation), as Dev puts it angrily, but sees running a coffee estate as his dream. He is a bit flighty but so good-natured and good-hearted that it’s hard to be put off by him.

In the midst of their believable characterisations and acting comes Ishwari Bose-Bhattacharya’s turn as Shonda, who is… well, I could not entirely make out what she does, but she is the live-in partner of someone we never meet and a woman who Dev befriends. This inexplicable, voluptuous woman speaks an awkwardly written blend of Bengali-accented Hindi and English, which is incongruous considering that the director is clearly asking for a suspension of disbelief from us by: (a) not asking Mathur to ‘do an accent’ (you know what I mean) and (b) by showing a Coorgi boy and his mother naturally conversing with each other in Hindi. Since we have been convinced to accept both the above, trying to introduce authenticity to Shonda’s language and style of speaking makes the film uneven. Why could she not have spoken plain Hindi?

That apart, the narrative turns slightly disjointed during an incident involving a gun towards the end of the film. Still, Mathur and Garg manage to pull Coffee Bloom over that bump with their natural ease before the camera.

A desire for revenge consumes us much more than it harms our intended targets – that’s what the film seems to be gently telling us; and that even if you never discover what caused a cataclysmic event in your life, the best thing you could do for yourself is to move on.

For the most part then, this is an engaging film. What is disappointing though is that Director of Photography Yogesh P. Jani fails to fully exploit the naturally rich location at his disposal. This is not to say that his pictures aren’t pretty. They are. Very pretty indeed. But then even if you and I were to take random shots of sundry spots in Coorg, we might come away with exquisite visuals – that’s how lovely the place is. Point is, with a professional behind the camera, I can’t remember any outdoor shot in Coffee Bloom so unique in its composition that it surprised me, which is odd considering that the Internet tells me Jani is the same man who delivered to us the photographic detailing of Saheb Biwi Aur Gangster Returns (2013). With Coffee Bloom, was he constrained by a limited budget or was he personally less invested in this project? It’s impossible to guess the reason. It is a measure of the absolute splendour of this region that it looks stunning in the film despite the limited imagination employed in the cinematography.

Be that as it may, I found Coffee Bloom a well-acted and unexpectedly satisfying film. Be warned: it is paced in a fashion that might be considered too slow and too languid by some. To me though it felt relaxed, reflective, unusual and offbeat.