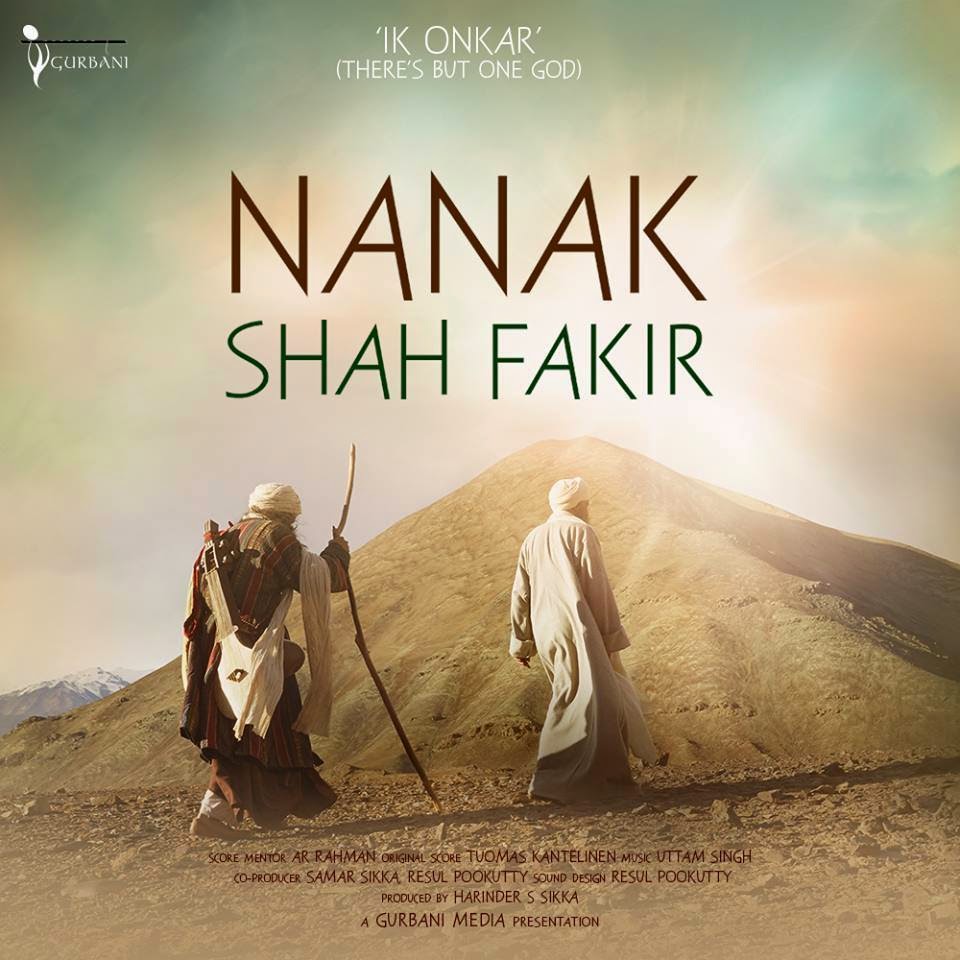 I suppose this film could be treated as a Beginner’s Guide to Sikhism for kindergarten kids.

Wait… Wait… Trash that thought. Even in the interests of teaching children about one of the world’s great religions, it would be a bad idea to expose them to this dull, tacky film which is nowhere close to being a professionally written and directed biography of Guru Nanak, founder of the Sikh faith. Nanak Shah Fakir (NSF) is a cloying ode by a man who is either an unquestioning devotee himself or is targeting viewers fitting that description. Let it be shown in temples of worship that express interest, but not in temples of learning please.

One point needs to be clarified: when I use the word “tacky” to describe NSF, I am not referring to its production quality for the most part. The film travels with Nanak to a string of stunning locales which have been shot extravagantly by the cinematographer. Uttam Singh’s music with the dominant sounds of the rubab are haunting. NSF also features a bunch of talented character actors including Arif Zakaria and Adil Hussain. Zakaria gets the meatiest role of the lot as Mardana, the Muslim wandering minstrel who went on to become Nanak’s constant companion. In that sense, Nanak Shah Fakir is National Award-worthy in comparison with that other paean to a religious guru recently released in Indian theatres: the crude, juvenile MSG The Messenger.

MSG was so bad that you could entertain yourself with the discovery of how bad bad can be. NSF is not that kind of film. The problem lies in its adoring tone and the director’s lack of detachment. The film is evidently aimed at only those among the faithful who would not accept  a film from anyone but a full-blown believer. Atheists, agnostics, people of other religions, even those within the Sikh community who are comfortable being doubting Thomases and Sikh/non-Sikh aesthetes seem to be completely off this film maker’s radar.

Another off-putting aspect of NSF is the fact that Guru Nanak here is a product of computer-generated imagery (CGI) – glowing moving images representing Nanak from infancy to adulthood, always with an indefinable face. The character speaks at all times in a resounding voice that is apparently intended to convey his ethereal nature.

The reason for this awkward creative choice is the position taken by Sikh authorities quoted in the media that Sikhism “does not allow humans to portray the Gurus”. Sadly, the result is a film that is impossible to get involved with, a film that remains as distant throughout as the near-echo in which Guru Nanak speaks here. What is lost completely is the point that Nanak’s teachings show us he was rooted in the real world. What can religious leaders claim to have achieved when their strictures have resulted in an ordinary film about an extraordinary mind?

This review is not unmindful of those who object to the depiction of Nanak by an actor. If you as an individual are convinced that humans should not portray the great Guru, then by all means, do not make a film going against your conviction. But why stop others from doing so, whether non-Sikhs or even Sikhs who disagree with this tenet? This is akin to governments across India banning beef, thus trampling upon the right to choose of non-Hindus and beef-eating Hindus?

People have a right to their beliefs. The problem is that religionists tend to impose their beliefs on others. In this particular instance, Sikka claims that his film has been cleared by the Akal Takht, the highest Sikh body. An opening text plate in the film states that it has the blessings of the Takht, yet the very same Takht has been reported in the media demanding a ban on NSF.

While that complex battle of he-said-they-said rages (NSF as of now has already been banned in places) the film ends up as a whisper of what it could have been. It is presented by A.R. Rahman, and Oscar/National Award-winning sound designer Resul Pookutty is a co-producer. It would be natural to assume that these two stalwarts would only lend their names to a worthy film. Sadly not.

Perhaps the director wanted no doubt in anyone’s mind that he has not used actors, which would explain the sub-par, flat and bald-skinned CGI Nanak. That constraint could not possibly justify the terribly obvious CGI elsewhere though, most notably in a battle between yaks at one point.

Cliches abound in the film. Of the aforementioned yaks, a black one attacks Mardana while a white one protects him. This colour scheme rears its head repeatedly. Evil folk, especially invading Mughals, are usually shown clad in dark shades. Nanak, on the other hand, is a white-skinned figure in snow-white garments – like fairness cream ad-makers, someone in the film seems convinced that a glow cannot emanate from an Indian complexion.

The film has some horrendously violent battle scenes, all captured by a shamelessly voyeuristic camera. Lingering shots of blood spurting out of a headless neck, a head lying on the ground, severed limbs and other body parts abound. There is no greater evidence of the hypocrisy of the Central Board of Film Certification than that this gruesomeness has been let off with a U/A certificate – possibly because of the religious subject – whereas the far less gory NH10 (in which very often violence was implied rather than in-your-face) was recently handed an A rating.

Guru Nanak was a fascinating figure whose ideas on caste, family, religion and the concept of Ik Onkar could make for an enriching film. Nanak Shah Fakir though is a blandly reverential depiction of his life. It touches upon some of his best-known teachings, but lacks depth and energy. Sikh groups protesting against this film are giving it more attention than it deserves.