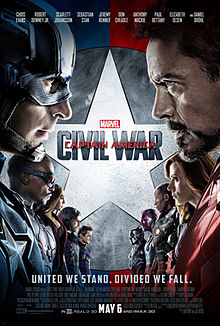 You have to wonder whether this is the result Marvel Studios was looking for when they decided to introduce a teenaged Spiderman into the ongoing series of money-spinning films from the Marvel Cinematic Universe (MCU). Civil War’s hero is supposedly that great-looking, sexy, “enhanced” individual, Steve Rogers a.k.a. Captain America, played by that great-looking, impossibly sexy actor Chris Evans. Yet it is obvious that writers Christopher Markus and Stephen McFeely ran out of ideas to sustain a third solo venture for Cap.

The result is a film that should more appropriately have been titled Captain America Vs Iron Man (with a very special appearance by Spidey).

The richness of 2011’s Captain America: The First Avenger is missing here despite the presence of a multitude of superpeople. The film’s themes of power, control and accountability are interesting, but they are not explored with much depth. The special effects are top notch though.

Captain America: Civil War travels to Lagos with some members of Marvel’s Avengers team: Steve Rogers, Natasha Romanoff / Black Widow, Sam Wilson / Falcon and Wanda Maximoff / Scarlett Witch. There they prevent the theft of a biological weapon but in the bargain end up killing innocents when Wanda uses her telekinetic powers to divert a bomb blast into the sky but accidentally destroys a nearby building.

When they get back home, the US Secretary of State informs them that 117 member countries of the UN have joined hands over the Sokovia Accords that will set up a body to oversee their work as Avengers. Tony Stark / Iron Man is willing to submit to supervision, since he still blames himself for the destruction caused by the robot Ultron in the film Avengers: Age of Ultron. Steve, on the other hand, is suspicious of governments.

The group splits over this disagreement. Tony recruits a hitherto unknown Peter / Spidey on his team, while Clint Barton / Hawkeye returns to help Steve’s group.

The film is about the result of this rift.

From the word go it is clear that in Captain America: Civil War, MCU is keen to counter the well-justified charge that it is a predominantly male white universe. Sadly, nothing much changes, despite the presence of three blacks (all men) and two women (both white) in the film’s population of nearly a dozen superpeople. This is what happens when you approach the issue of representation as an obligation in response to criticism rather than out of conviction. And so in Civil War, as with all the other MCU films, white men continue to run the world while blacks and women are charitably permitted to play their sidekicks.

That being said, the half-hearted attempt at representation leads to an over-crowded film with short shrift being given to most characters. Natasha, who is played by the incredibly charismatic Scarlett Johansson, is still on the margins. Her purring voice lingers on long after each of her fleeting appearances, which is a reminder that she – the character and the actress – deserves so much more than to be a satellite player in someone else’s world.

Wanda (Elizabeth Olsen) and Vision (Paul Bettany) have some interesting moments together. It’s nice to see Wanda’s character developing because she has such Hulk-like potential in the way she struggles with the consequences of her abilities. Sam Wilson / Falcon (Anthony Mackie) and War Machine / James Rhodes (Don Cheadle) are dull though. And Black Panther / T’Challa (Chadwick Boseman) remains a shadowy figure on the sidelines throughout, which is criminal considering how iconic the Panther is in American superheroverse.

The stand-out supporting character backed by solid writing in this film is Spiderman (or should we call him Spiderman-boy) with his exasperating youthfulness, garrulous charm and hilarious fascination with the superpowers he is just beginning to understand. He is an absolute hoot. So is the rest of the Avengers’ bemused reaction to him. It helps that actor Tom Holland is a find.

Spidey is one of Civil War’s two highlights. The other is the account of Tony’s childhood, given through two well-executed flashbacks that are perfectly placed in the film.

Oddly enough, Captain America as the central character gets a lot of screen space but little heft. At the end of the day, the sharpest memory of him in this film remains a visually spectacular fight between him and Iron Man towards the end, and an earlier scene in which he physically prevents a chopper from taking off with the strength of his bare arms. Oh man, what arms! No doubt Chris Evans is gorgeous, and when Tony Stark says he is tempted to punch in Cap’s “perfect teeth”, you know there are few stars better suited to that description. But he is also a fine actor and it seems such a waste that his own story does not lift off in this film.

Take Tony and Spidey out of Captain America: Civil War, and what you get is a series of well-paced, well-choreographed fights with a sliver of a story. A pity because it has so many elements that, if tapped, could have made it way more than just an enjoyable but generic superhero film.

Related article by Anna MM Vetticad: “Boys will be boys and girls will be afterthoughts: The hyper-masculine world of superhero films”