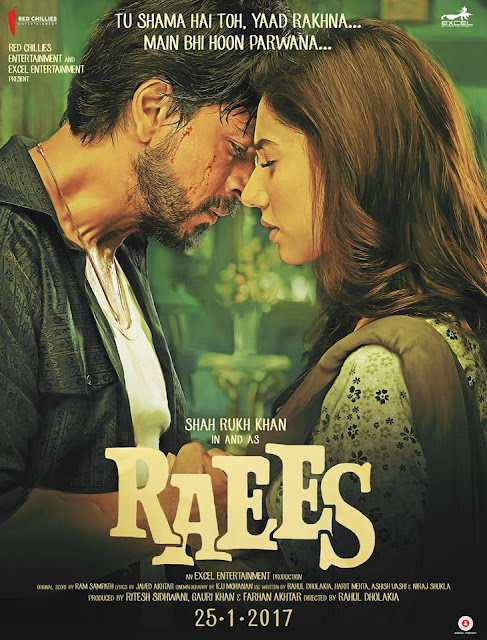 “Pabandi hi baghawat ki shuruat hai (Restriction is the starting block of rebellion),” says the  voiceover at the start of this film, while commenting on prohibition in Gujarat. It is a simple line, yet so effective within this story and in the larger current national context as India reels under bans, prudishness, increasing censorship of the arts, eating habits and life choices, and prohibition in states where governments are well aware of flourishing gray markets.

This is the kind of writing – straightforward and effective – with which writer-director Rahul Dholakia kicks off Raees. Borne on the shoulders of this screenplay, the first half of the film is taut, pacey, action packed and utterly gripping. As the story takes us through little Raees’ early interest in the illicit alcohol trade, shows us how deeply entrenched the business is in the bylanes of his hometown such that children from ordinary homes become natural collaborators of criminals, and recounts the manner in which the adult Raees establishes himself as an ‘entrepreneur’ with political connections and a social conscience, I found myself unable to take my eyes off the screen for a single second.

The only exasperating aspect of Raees up to that point is that it seems like the heroine is being treated as a good-looking side-show. (As it turns out, she becomes important later, though her husband’s attitude towards her is disquietingly misogynistic, his actions repeatedly verging on violence. The film’s tolerance of his behaviour towards her and rose-tinted view of his other crimes becomes disturbing as it rolls along.)

That said, the narrative in the opening half is purposeful, single-minded in its desire to entertain us yet be realistic to the extent that it is possible within the confines of conventional Bollywood storytelling, and unapologetic about those goals.

So, Ram Sampath’s songs are catchy, relevant to the storyline and well woven into the narrative. The stunts are deliciously amusing in their improbability and heart-stoppingly thrilling. And like every traditional Indian hero, like Bruce Willis, Harrison Ford and Tom Cruise a few continents away, Shah Rukh Khan too emerges miraculously more or less unscathed from every battering. It does not matter, because Raees’ pre-interval storyline remains packed, and it does not pretend to be anything but what it is: a commercially driven entertainer.

The proceedings in that half are unrelenting, leaving us with little time to ponder over why the hero casually took to crime although there is nothing to suggest that he had no choice or was a congenital psychopath; and skimming over his questionable interpretation of his mother’s conviction, “Koi dhanda chhota nahin hota aur dhande se bada koi dharam nahin hota.”

Then comes the second half and Raees loses its way. It is hard to understand why so many writers and directors conceive and execute their films in this fashion. Post-interval, Raees’ story boasts of limited depth, and tries to camouflage this failing with a swagger. The beginning of the end comes with the song Zaalima mindlessly thrown into the narrative immediately after the interval, and it goes downhill from there.

The sad part is that Khan as the titular character is very convincing. SRK has looked graceful and dignified in his films starting with Fan, in which he has made no obvious effort to camouflage his age. It helps that he rocks that beard. I do wish someone would remind him though that he looks so much nicer romancing a heroine closer to him in years.

It has been a pleasure in the past year or so to see Khan allowing the actor in him to subsume the star. In this film, he strikes an uncommon balance between being stylish, stylised and yet restrained.

Raees’ supporting cast is a roll call of some of Bollywood’s finest character actors: Nawazuddin Siddique (yes that is how his surname is spelt in the credits, not as Siddiqui) plays Raees’ bête noir, the dogged policeman Jaideep Ambalal Majmudar, Mohammad Zeeshan Ayyub is in the role of the hero’s loyal lieutenant Sadiq, Atul Kulkarni plays Raees’ first boss Jairaj, and Narendra Jha his later business associate Moosa. Kulkarni gets the first shot at one of the films most wolf-whistle-worthy lines (which is later quoted by Raees): “Baniye ki dimaag aur Miyabhai ki daring, dono hai iske paas.” Mahirah (spelling taken from the credits again) Khan – a star in Pakistan, a debutant here – is naturally easy before the camera playing Raees’ girlfriend and later his wife.

Good actors need good writing and editing on which to peg their craft though, and the post-interval Raees seems not to know where to go in these departments.

One of the positive aspects of Raees, as with last year’s Salman Khan-starrer Sultan and several films in recent years featuring central Muslim characters is that their religious identity does not define them. This is a much-needed departure from the treatment of minority community members in Hindi films until a decade back. Dholakia is not needlessly conscious of his hero being Muslim, as a result of which we get to see him as a person who happens to be Muslim, male, Gujarati and many other things – in short, a human being.

If only that nuanced approach had been carried into every other element of Raees’ post-interval storyline. Instead what we get is a matter-of-fact account of how A happened in the hero’s life, then B, then C, then D, all the way to Z, with no detailing, no surprises, too much music, too many close-ups, shots that linger longer than they should, all in what seems like an effort to impress. This is unexpected considering that Dholakia is the man who gave us the deeply moving Parzania (2007) based on the true story of a child who went missing in the 2002 Gujarat riots.

Raees is rumoured to be based on the true story of the gangster Abdul Latif who operated in Gujarat in the 1980s and ’90s. From information available on the Internet, there is a fascinating tale in there of his association with Dawood Ibrahim and of the police-politician-underworld nexus that allowed him to rise. This film scrapes the surface but fails to take forward what lies beneath. Likewise, the potentially intriguing life-long face-off in Raees between the hero and Majmudar is well begun and could have been the fulcrum of the film, but Majmudar becomes only an intermittent presence after a point. The hypocrisy of governments that introduce prohibition, the politics of riots, the virtues of vicious men all could have been beautifully studied in this film but are not.

The first half of Raees is supremely interesting and filled with promise. Besides, Shah Rukh Khan is a joy to watch in this new, exploratory innings of his career. The second half lets him down though. Style trumping substance is rarely a good thing for a film.