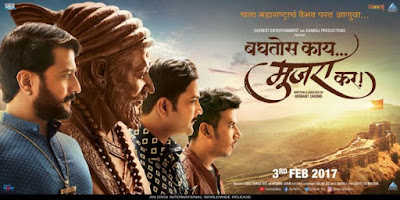 It is risky to say a word against devotees of Shivaji. Making a film slamming hypocritical bhakts of the Maratha king, that too in the Marathi language, is nothing less than an act of bravery. This is the tragedy of the times we live in: that all criticism requires courage, because abuse and assault have become the routine Indian response to contrarian views.

In this scenario, it is important to doff a hat to Hemant Dhome for his debut directorial venture Baghtos Kay... Mujra Kar! before launching a critique of the film. BKMK is about phony Shivaji followers who use the iconic monarch’s name for political gain without any true commitment to him or his legacy. It is a flawed film, yet one that must be lauded for its brave stand on a controversial issue. The story is fictional, but is obviously aimed at the real-life politicians who have sanctioned a sinfully expensive Shivaji memorial in the Arabian Sea.

The state of the structure causes great pain to Nanasaheb who is a disciple of Shivaji. He hopes to restore the fort as part of a development project that includes planting 6,000 trees in the area and using solar panels to generate electricity for the local population. The scheme he envisions will require only Rs 6 crore.

Towards this end, he and his friends/chamchas Pandurang Shinde a.k.a. Panda Sheth (Aniket Vishwasrao) and Shivraj Vahadne a.k.a. Shiva (Akshay Tanksale) decide that Nanasaheb should become an MLA. While he struggles to acquire the clout to get a party ticket in the coming elections, the high command comes up with a plan to build a Shivaji Memorial at a cost of Rs 1,600 crore. Nanasaheb is disillusioned because he believes this money should have been used instead to save the existing archaeological reminders of Shivaji in the state and for the welfare of the poor.

The film is about the politics surrounding the memorial and Nanasaheb’s attempt to achieve his goals.

BKMK starts off nicely enough. It is interesting in the way it reminds us of the grandeur of the Maratha empire with its aerial shots of Nanasaheb’s beloved fort and scenes of sloganeering that are designed to sound like the echoes of words from a distant past. Nanasaheb also has an interesting recurring nightly dream in which he sees himself as an ancient Maratha warrior, a dream that creates an air of expectation around what is to come. We also get lots of pretty visuals of scenic Satara. Even a brief visit to Mumbai later on has been imaginatively shot.

The narrative stumbles early on though for multiple reasons.

The tone of the storytelling and the portrayal of the three protagonists are both very confusing. In a bid to project them as innocent, the film often ends up making them look foolish. There are too many purposeless asides that distract from the main focus of the plot. The portrayal of Panda Sheth’s relationship with his bride, for example, is no doubt meant to be humorous, but unless you find patriarchy funny, there is nothing amusing about his behaviour towards her. Besides, his attitude and the time spent on his interactions with her have no relevance whatsoever to his role in the rest of the film, and appear to have been stuffed into the proceedings in a formulaic fashion for comic relief.

A scheme hatched by the central trio involving Shivaji’s sword is so hare-brained and unconvincing that it robs the film of the gravitas it needed. It is all very well for them to be naïve, but it is hard to tell whether the director expects us to be moved by their determination or to laugh at their stupidity? There is a difference between lack of cunning and lack of intelligence, but BKMK fails to recognise that.

The portion of the film set outside India seems to have been made on a tighter budget than was required. The scenes in London leave much to be desired on the technical front. Many of the frames are ill-chosen and again, the threesome’s antics in the city are a needless comical diversion from a serious subject.

Over and above all this though, the film’s endorsement of Shivaji worship is troubling. I am not taking a position here on Shivaji’s greatness. The point is that while it is necessary to expose those who build extravagant mammoth monuments in his name but neglect dying farmers, it is just as necessary to critique the Maratha king himself. Nanasaheb’s deification of Shivaji is projected as a positive attribute. Dhome needs to be reminded that idol worship has turned us into a nation where a balanced discourse on revered historical figures is becoming almost impossible.

So yes, BKMK must be praised for giving a well-deserved tongue-lashing to those who exploit the legacy of Shivaji for narrow personal gain, but it must also be called out for its own uncritical view of the legendary ruler.

BKMK revolves around an extremely important theme. It is worth repeating that Dhome deserves a salaam for sticking his neck out in this fashion over such a contentious matter. His stance on the Shivaji Memorial in Maharashtra is unflinching and admirable. Sadly, valour alone does not add up to a good film.

Footnote: The Marathi films I have watched in Delhi so far have been reasonably well subtitled as far as I can remember, which is why the quality of the subs for this one are particularly surprising. “All they want is to fill each other’s coiffeurs,” were the words on screen at one point while characters discussed politicians pretending to care about Shivaji. It goes without saying that these netas did not intend to pack their hairdressers or their hairdos with money. Someone please tell the subtitling team that. The number of spelling and grammatical errors were too many to be excused. “Smasher” stood in for a character named “Shamsher”, for instance. It is also a pity that none of the songs were subtitled.