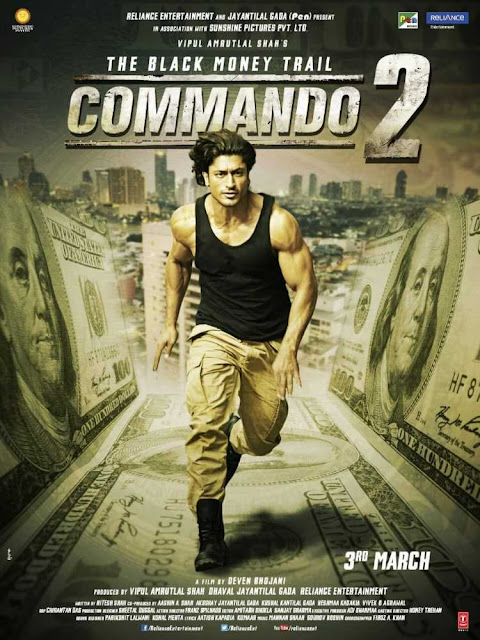 It might be natural to assume that the tale of a government-appointed, trigger-happy action junkie on the trail of a murderous, black-money-laundering villain would be a fun ride, especially with His Royal Hotness, His Muscular Majesty Vidyut Jammwal in the driver’s seat.

Jammwal (yes, now with a double “M”) is as good-looking as a man can be. If you watched him on debut playing John Abraham’s bete noir in Force (2011), you probably know that already. As Captain Karanvir Singh Dogra in Commando 2: The Black Money Trail, the character he earlier played in the 2013 film Commando: A One Man Army, he does everything to please a lustful viewer. He executes sleek stunts, repeatedly jumping, spinning, flipping, whirling and twirling his beautiful body through the air. Above all, he wears a ganji in large parts of the film to serve us generous views of his bulky bare arms and shoulders. What more could a hormone-laden viewer ask for?

So it goes that India’s Central Government, anxious to show results after the demonetisation exercise, desperately wants to retrieve the crores of black money stashed away in foreign bank accounts and deposit it as largesse in the accounts of the general population at home. The crater-like pothole in its path is the Union Home Minister (Shefali Shah) whose son too has a cache of cash lying abroad. Pretending to work towards achieving the government’s goals, she assembles a crack team of mercenary officials who are at her beck and call. They must travel to Malaysia and arrest Vicky Chadha who is in the business of keeping safe the black money of a large number of corrupt Indians.

Knowing the Minister’s ill intentions, Karan – a trained army commando – sneaks his way into the group. The film is a battle of wits and fists between the honest, patriotic officer who doesn’t mind taking the law into his own hands (when it is for the country, how dare we complain!) and those who would betray the motherland for their personal gain.

Commando 2’s narrative delivers some unexpected twists and turns, but the colours that fill in the outline of the story are weak, amateurishly handled and in the end, amusing in a clumsy effort to play to the gallery. In a film of this sort, aimed at racing pulses rather than thinking minds, it is perhaps pointless to ask why the Home Minister alone is the moving force behind the government’s efforts at retrieving black money from abroad, with the Finance Minister nowhere in sight. But even as the racy action keeps us hooked, it is hard to get past Commando 2’s cliches and loopholes.

Karan & Co zip around Malaysia with such confidence and ease, it would seem that country is in India’s pocket and barely has a police force of its own. Adah Sharma plays Karan's teammate Bhavna Reddy, an irritating encounter specialist who harks back to the old Hindi film stereotype of a south Indian. Bhavna is a double whammy of sorts since she serves as a ditsy, frivolous female sidekick to Jammwal’s grim-as-hell Karan, a sort of female Chris Tucker to every serious white cop in Hollywood history. Besides, the romance between them feels terribly contrived and silly because of the complete lack of chemistry between the two.

Then there is their colleague Zafar, the most awkwardly written, stereotypical ‘good Muslim’ seen in recent years in Hindi cinema, the kind that – in my humble opinion – could only emerge from the pens of writers over-compensating for their deep-rooted suspicion of the community, a suspicion they may possibly not even be conscious of.

The film’s impressive action scenes and pretty hero cannot make up for its limited substance, which matters particularly because the action is not unrelenting. While Karan is bashing up baddies, it is hard to look away from the screen. When he is not, it becomes easy.

Sadly, there is more to Jammwal than that face, body and his fighting skills. Someone give this man a more substantial film, please.