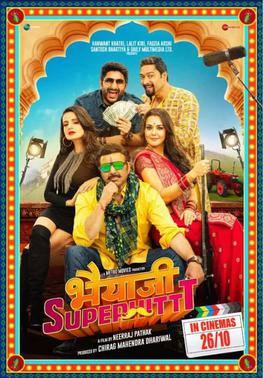 If you thought Sunny Deol uprooting a hand pump and scaring the Pakistan army by hollering at them was a landmark moment in Indian diplomacy, then you must give his new film a shot. In a climactic battle in Bhaiaji Superhittt, Deol lifts up an entire SUV when he finds it pinning his wife down on a rail track while a speeding engine approaches. No Romeo has yet done that for his Juliet, no Majnu for his Laila, but then of course neither gentleman was blessed with this hero’s dhai kilo ke haath that have been known to achieve what hordes cannot manage.

The hoodlum with a heart of gold who melts into an emotional puddle in matters involving the woman he adores has been done to death by cinemas across the world, and this Bollywood version has nothing new to offer. Nothing. I repeat, N-O-T-H-I-N-G.

The colours of the costumes and sets are as loud as any you have seen in Akshay Kumar’s comedies of the past two decades. And the screenplay is packed with formulaic elements that dominated 1970s and ‘80s Hindi films. This includes a long-drawn-out closing passage in which all the players in the drama gather at one spot to engage in fisticuffs that take them from what looks like a deserted factory to a railway line to a cliff where the lead couple hang precariously, using the opportunity for a reconciliation. One small change from an earlier era: here the heroine does not stand whimpering and watching, she bashes up a bunch of bad guys herself.

Lord Shiva is a recurring motif that goes nowhere. Sometimes the writer introduces clichés just for the heck of it without knowing what to do with them. In the second half, for instance, Bhaiaji’s doppelganger appears on the scene, which might cause you to assume that a Shakespearean comedy of errors is about to unfold, but no, it does not. This chap, a squeaky-voiced aspiring actor, is also – obviously – played by Deol. His arrival makes no difference to the plot, and his erasure would have left the outcome unchanged.

If writer-director Neerraj Pathak and his co-writers thought they were spoofing Bollywood, then here too they hold out little novelty value. Deol, for one, has done enough self-referential parodies of his He-Man screen avatar since Gadar for this aspect too to feel stale.

Still, there are moments when the project’s comic potential peeps through, such as in that scene in which Bhaiaji yells at someone for dancing “like a woman” while filming a romantic number, and demands that his moves be more macho. The swiftness with which the fellow switches to aggression is amusing. Deol is not the world’s greatest actor (to put it kindly), and yes, he hollers and grimaces in Bhaiaji Superhittt as he always does, but what comes to his rescue here is what seems like a determination to not take himself seriously, which makes it hard to dislike him even while disliking the film.

Zinta, who is appearing on screen after a long gap, looks pretty and is fair enough as Sapna Dubey, but the role does not challenge her as it should a woman of her immense talent.

The supporting cast features some wonderful actors, though it is unclear why Pathak bothered to cast them since he fails to tap their abilities in anyway. Jaideep Ahlawat (Gangs of Wasseypur) and Pankaj Tripathi (Newton, Nil Battey Sannata, Gurgaon) are completely wasted here.

It is Arshad Warsi’s comic timing that saves Bhaiaji Superhittt from being an absolute cipher, and the reason why I am going with a 0.5 rating instead of zero. I found myself occasionally giggling in spite of myself around Warsi’s Goldie Kapoor, though I must say I laughed out loud only once, and that was when the aforementioned train engine was hurtling towards Bhaiaji and Sapna, and I thought Pathak & Co intended to get Deol/Bhaiaji to stop it with his bare hands. Maybe that is what they should have tried if they wanted to go all out in the direction of a Bollywood parody of Bollywood formulae, but the breadth of this film’s imagination is too limited for that.

Bhaiaji Superhittt has been in the making for almost a decade, but its mediocrity can hardly be blamed on the delay. The film is a regurgitation of numerous Hindi films made in the past 50 years. It feels so dated that the only originality I could spot are the three Ts in the second word of the title and the two Rs in the director’s first name – neither innovation is worth the price of my ticket.