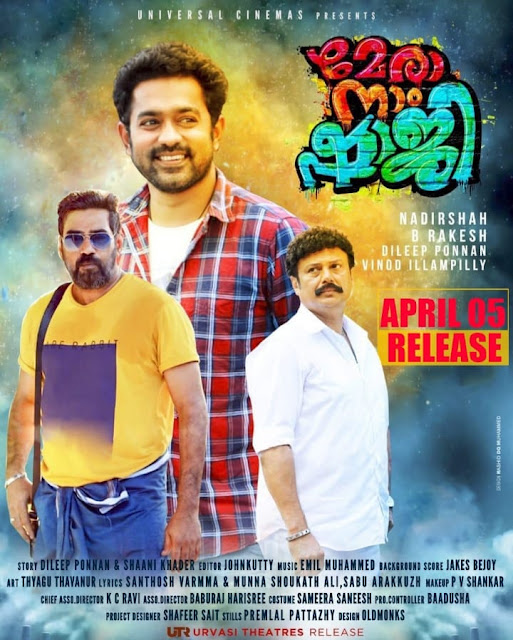 What was that about?

What on earth was that about?

Director Nadirshah’s Mera Naam Shaji is inexplicable from start to finish. This is not inexplicability arising from deep intellectualism or even basic intelligence. Barring a handful of instances of humour, what it is is a vacuous screenplay struggling to figure out how to get to where it wants to be.

Three strands run through the film, drawing on the present-day experiences of three men from different parts of Kerala who do not know each other and share the same first name, (you guessed it) Shaji.

The Shaji played by Biju Menon is a contract killer whose modus operandi is to stab people in their buttocks.

On a parallel track, the Shaji played by Baiju Santhosh is a cabbie driving a group of young people around Kerala, among them a woman called Neenu Thomas (Nikhila Vimal) brooding by herself in the backseat, untouched by her companions’ mood for revelry.

Then there is the ne’er-do-well Shaji played by Asif Ali, a con man who hangs out with his buddy Kundishan (Dharmajan Bolgatty), even as he mourns the separation from the woman he loves, while his purposeful politician brother (Ganesh Kumar) works hard for the survival of his party.

Their paths inevitably intersect, but the impactless wanderings until then and thereafter suck the fun out of the marginally interesting manner in which they first encounter each other. The confusion arising out of their shared first name should have resulted in a riotous comedy of errors, but it does not.

Clearly the buttock stabbing is meant to be funny, but the writing is too feeble in this case for the humour to take effect.

Equally clearly, the track involving Shaji the driver and his passengers is meant to be suspenseful, but the grand reveal is weighted down by limp writing, clichéd and confused characterisation, and some lousy acting by supporting artistes.

Clearly too we are meant to root for the youngest Shaji’s fading romance, but it is too weakly written to be worthy of any emotional investment. For one, there is nothing more to the other person in the relationship than this description: the pretty young woman that Asif Ali’s character loved and lost. Nothing at all.

The antagonism towards womankind at large that Mera Naam Shaji lets slip near the climax explains why writers Dileep Ponnan and Shaani Khader struggle to step into women’s shoes and thus end up creating such stereotypical female characters. Apart from one hero’s dull love interest who has no agency, twiddles her thumbs and waits to be rescued by her boyfriend, there is the driver Shaji’s loud, nagging, jealous wife (Surabhi Lakshmi). As one of my favourite teenagers might say with an eye roll – boring!

“Boring” is not the word for the barely disguised animosity that erupts briefly in a scene involving the criminal Shaji. At the sight of a woman engaged in a street fight, he says out loud for no logical reason: “What's this? Vanitha mathalo? (A women’s wall?)” The reference, of course, is to the hundreds-of-kilometres-long human chain of solidarity formed by women in Kerala just months back to draw attention to their battles against patriarchy. The deliberate casualness with which it is mentioned is obviously meant to trivialise the grave issues of discrimination that they sought to highlight.

Shaji’s subsequent comments in the scene go even lower. He spews a misogynistic lecture at the woman about how she and her ilk should be set right, in effect advocates domestic violence, and for good measure, walks away from that conversation cursing all “feminist activists”. Since this woman had previously been shown smoking, drinking and speaking English, I guess she was deemed worthy of nothing but condemnation in Mera Naam Shaji’s universe. This passage comes across as a symptom of a long-simmering, deep-seated resentment.

Considering the visceral hatred for women in this portion, the concern expressed elsewhere in the screenplay for a survivor of sexual violence feels faked.

There is not much to recommend the men of Mera Naam Shaji. Asif Ali is a sweet-looking chap but lacks a strong screen presence and here has the additional disadvantage of playing the worst conceptualised of the three lead roles. Given a good script, Biju Menon can be stupendous, but without that here his acting just feels repetitive. Baiju Santhosh does the best job of this trio, but how far can he go with such limited material to work on?

Sreenivasan plays a lawyer in Mera Naam Shaji whose motivations are as inexplicable as the film itself.

As for Nikhila Vimal, she has little to do beyond look mournful throughout. What a waste of a bright, striking, good-looking actor.

Like everything else in this film, there is no particular well-thought-out contextual reason for the choice of a Hindi (not Malayalam) title, or the use of a full-fledged Hindi-Malayalam qawwali (albeit a tuneful, lively one) in the soundtrack. The latter is specifically sought out by one of the smaller characters. If the idea was to remind us that his cultural awareness and exposure extend beyond Kerala, then the fact that he also turns out to be a sexually promiscuous villain amounts to either intentional or subconscious othering. It is laughable that the same film then spells out a spot of messaging on secularism in the very ordinarily composed closing song. Shaji, you see, was chosen as the name of the three leads – Shaji Usman, Shaji George and Shaji Sukumaran – because you will find it in all parts of Kerala, across religious and other communal divides.

It is hard to believe that Mera Naam Shaji has come to us from the same director who, right before this, delivered Kattappanayile Rithwik Roshan (2016), which, whatever its minuses may have been, was funny and well-meaning. Mera Naam Shaji is not just misogynistic, it is boring. Seriously, what on earth was it trying to be?