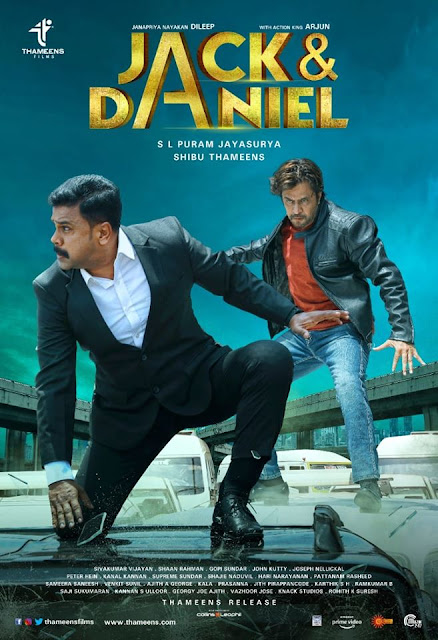 A CBI officer is sent to Kerala to catch a thief. Daniel Alexander has a reputation for being the bete noir of the Mumbai underworld and since he is played by Tamil cinema’s action star Arjun Sarja, it goes without saying he throws a mean punch. His job is to ensnare Jack (played by Malayalam superstar Dileep), a Robin Hood-like Malayali who steals from the corrupt and wealthy to give to those suffering the consequences of their moral and financial corruption. The challenge for Daniel is that because Jack robs only black money, his victims never report their losses.

Daniel crisscrosses Kerala and Goa in pursuit of his designated prey. This journey takes us through Jack’s personal life, establishes him as a gem of a human being, shows Daniel being gradually drawn to this likeable bad guy on a mission and ultimately hints at the possibility of a sequel.

Along that route we are given a lecture on how Indians do not treat Army veterans with respect – it is a measure of how ugly and aggressive the nationalism of Malayalam cinema’s northern counterpart Hindi cinema has become in recent years, that after overdosing on the latter’s insidious divisive effects for so long, I found this one-off sermon in a Malayalam film comparatively understated. It would be nice, for a change, to see an Indian film about the systemic mistreatment of Army veterans and their families that has nuance and does not sound like a tear-jerking preacher, but for now there is Jack & Daniel which is at least not crass and intentionally mischievous in this matter.

The title, obviously a play on the global alcohol brand, is an overstatement though. Jack & Daniel is far from intoxicating. A thief as a do-gooder and an affable thief duelling with an incorruptible cop have been done a million times before by cinema across the world, by Indian cinema at large, even specifically by Dileep himself, and this film has little by way of originality to contribute to the genres it occupies. It is neither clever enough nor pacey enough. The first half feels stretched, details of Jack’s schemes are glossed over and what little is revealed shows that his success is entirely reliant on the all-round stupidity of the public and those managing the establishments he targets.

Apparently, cracking security systems in Kerala and Goa is a cakewalk. Sometimes, disguising yourself as a woman and either weeping or batting your eyelids before a man is all that is needed. 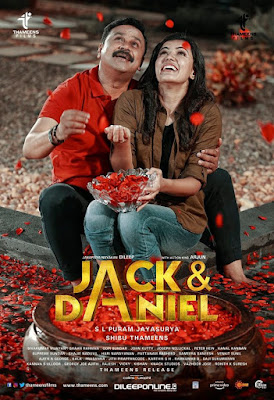 The only woman with a respectable amount of screen time in Jack & Daniel is Anju Kurian’s Susmitha. At first she comes across as the staple young-woman-falling-for-a-man-played-by-a-much-older-male-actor prototype, later you realise the role has more substance than that, but in a scene of confrontation with Jack she ultimately turns out to be a lightweight whose only purpose in the film is to make the hero look smart. Mission accomplished.

Its man-centricity apart, Jack & Daniel picks up post-interval when the screenplay has the protagonists playing off each other instead of showing them operate in separate spaces as they largely do in the first half. Dileep and Sarja have decent chemistry between them and unlike Susmitha, at least Daniel is not shown to be an ass just to convince viewers that Jack is a genius. Add some above-average action and chases, and in the second half Jack & Daniel becomes tolerable fare.

Like the film itself, the actors are all okay – neither brilliant nor insufferable. With one exception. Saiju Kurup as a senior Kerala cop, DySP Phillipose, displays exceptional comic timing that overrides the silliness of some of the situations his character finds himself in. For the nth time it must be asked: why does the Malayalam film industry not see that this man is hero material?

It must also be asked: what on earth inspired Jack & Daniel’s tacky Peter Hein cameo with its tributes to Pulimurugan, Madhuraraja and Baahubali? And why on earth did the reputed action director agree to feature in such a superfluous, truly idiotic scene?

In the hands of cinematographer Sivakumar Vijayan, Goa and Kerala look glossy in Jack & Daniel – pretty but lacking any individuality and character. Vijayan chooses to capture both states in extreme long shots, aerial and other frames that somehow paper over their distinctive features. The result: attractive visuals that could have been achieved by travelling to any of a million spots in the world and not particularly here.

That is more or less the story of this film too: it lacks personality, it is forgettable, but in a year that has subjected us to the excruciating agony of watching Mikhael and Kalki, it at least offers some tolerable  timepass.