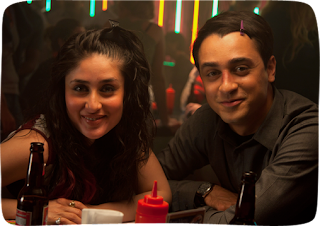 From The House Of Johar, abode of the Bollywood deities of Melodrama and Lavish Scale, comes this pleasantly small and sweet romantic comedy about friendship and love. It’s not so much a romance actually as a buddy movie with a boy and girl, and the coming-of-age story of the boy. There’s that eternal question: can two people of the opposite sex ever be friends without falling in love? The answer is not obvious, and you’re unlikely to guess it’s coming up even as Ek Main Aur Ekk Tu’s unusual ending nonchalantly strolls by.
By the time that happens, if your tastes are anything like mine, EMAET will have drawn you in so subtly that you will have forgotten the moment when you began to share Riana’s laughter, when Rahul’s pain became yours. Did I tell you their names are Riana Braganza and Rahul Kapoor? He’s an average guy who has never been good enough for his pushy parents. She’s a ray of sunshine bursting at the seams with talent. He’s a reluctant architect though his passion is photography. She’s a hairstylist and you wouldn’t guess from her cheery personality that she too gave up some dreams. Mr Tight Ass and Ms Free Spirit meet in Vegas and gel unexpectedly. Oh no, yet another film about opposites attracting, did I hear you say? But this one’s different. And for the record, it is not a copy of What Happens In Vegas.
Four years back, when Vidya Balan and Shahid Kapoor starred together in Kismat Konnection, Vidya was subjected to nasty remarks though she’s just four years Shahid’s senior. There were acerbic reactions even when Bipasha Basu, then 30, co-starred with Neil Nitin Mukesh, then 27, in Aa Dekhen Zara, though it was and still is routine for a man to play the lover of an actress 15-20 years his junior. But that gender-specific ageism has been very very very gradually declining from the Bipasha-Ranbir Kapoor pairing of Bachna Ae Haseeno onwards. What’s more, EMAET actually specifies that Imran Khan’s Rahul is 25 and Kareena Kapoor’s Riana is 26-going-on-27 … just in passing, perhaps to make the point that it’s no big deal.
Subtlety is, in fact, EMAET’s strength. That the heroine has had sex before marriage is not tackily trumpeted as a sign of liberalism or liberation, nor is it condemned … it’s just stated as a fact. The film is equally subtle about the lead pair’s religions. In contrast to earlier decades when every young Christian female character in Hindi films was a cabaret dancer or gangster’s moll or at best a secretary in minuscule outfits, in pointed contrast to the sari-wearing demure Hindu heroine, EMAET steers clear of the stereotype. Riana’s family is not caricatured either, unlike the Christian families of an earlier Bollywood when all the men were portrayed as drunkards, gangsters, bootleggers and bartenders, when all Christians wore huge crosses on their chests, made the sign of the cross in slow motion at the drop of a hat and could barely speak Hindi. In that sense, EMAET is a refreshing change from a film as recent as Ajab Prem ki Ghazab Kahani in which the Hindi-speaking Hindu hero visits a church and suddenly switches to English as though a Christian god would not understand Hindi.
A lady in the hall where I watched EMAET did wonder aloud whether the film is playing it safe by making the heroine a Christian, as a way of explaining away an Indian girl being sexually active before marriage. The thought preyed on my mind for a few seconds … but well, if that really was the intent, I’ll let it pass since to my mind the actual stereotyping in this film is of socio-economic differences – Rahul’s mom is a typical rich bitch, dad is a cold and calculating bastard; they seem to be just tolerating each other in contrast to the middle-class warmth of the Braganza home. I’ll let this pass too because it contributed to the film’s fun quotient, especially that lively Auntyji song with Riana’s family and one neatly done climactic scene featuring a fork and chopsticks in the Kapoors’ Mumbai home!
The verdict … EMAET does take a bit too much time to pick up in the first half, but the pacing gets sorted out by the interval. The dialogues feel very real, except in two instances of trying-too-hard-to-be-what-we-think-cool-people-would-be … when Riana’s mom asks her if she’s PMS-ing and her dad asks if she’s had sex with Rahul. That apart, it’s an understatedly funny film completely unlike many recent Bollywood comedies – no hero peeing on a haystack here, no farting ape! The emergency in Riana’s life that brings her to Rahul’s house does seem slightly contrived in retrospect – why is a charming creature like her so friendless in Vegas? But that’s a minor squabble in the overall analysis.
Major grouse: Why doesn’t Kareena get the No. 1 slot in the credits? She’s the bigger star than Imran and lights up the screen every time she appears in EMAET. Imran is well suited to the role and is growing as an actor no doubt, but Ms Kapoor is just luminous! She could easily have played Riana as a city-bred version of Geet from Jab We Met, but she does not. So, like Geet, Riana is vivacious and fearless, but she has far more maturity, refinement and good sense. Imran and Kareena don’t have the searing sexual chemistry that Kareena shared with Hrithik Roshan in so many films, but such sparks would have been out of place here. Quite rightly, instead, they come across as one of those compatible couples who seem to enjoy each other’s company. Amit Trivedi’s music is as nice as Batra and Ayesha Devitre’s writing. EMAET didn’t take my breath away, but it did leave me with a warm, happy feeling.
Rating (out of five): ***
CBFC Rating:                       U/A
Running time:                        110 minutes
Language:                              Hindi
Photograph courtesy: http://ekmainaurekktuthemovie.com/
Posted by Anna MM Vetticad at 3:55 AM