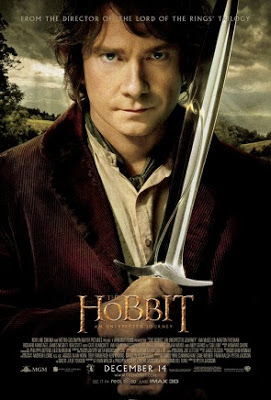 A magnificent spectacle and a cure for insomnia … that’s Peter Jackson’s The Hobbit: An Unexpected Journey.  The film’s overwhelming self-indulgence sadly dilutes the impact of so much that’s so remarkable about it – the grandeur of it all, the breathtaking visuals, writer J.R.R. Tolkien’s imagination, Howard Shore’s rousing music and the lovely cast helmed by Ian McKellen who has more charisma in his little finger than most actors can hope to summon up with their entire personality. Martin Freeman as Bilbo Baggins the hobbit – a little human-like being – is a likeable fellow; Richard Armitage as the dwarf leader Thorin Oakenshield possesses the most arresting pair of eyes on a striking face; and the wonderful Andy Serkis returns once again to summon up the motion-capture-induced Gollum, that wretched creature who remains my favourite character in the entire Lord of the Rings (LOTR) series. To borrow Gollum’s single-word refrain, it’s all quite “precious”. Damn you Peter Jackson!

But I’m getting ahead of myself … For the benefit of out-and-out non-Tolkien-ites among you, here’s some background first … The Hobbit is a cult fantasy novel by Tolkien released in the 1930s. The LOTR trilogy of books was a sequel to The Hobbit. Director Peter Jackson, as you know, turned LOTR into a critically acclaimed, multiple-award-winning, money-spinning triad of films. He is now back with the baggage of that success, leaving us with a slight problem: Jackson has decided to split up The Hobbit into three films. Was it because he assumed that three films might make more money than one, or because he wanted to expand his canvas as far as possible? Either way, Part 1 – The Hobbit: An Unexpected Journey – suggests that financial gain notwithstanding, at least on an artistic level that decision was a mistake. At 2 hours and 43 minutes, the film could test the patience of even Indian viewers bred on long films. Damn you Peter Jackson!

An Unexpected Journey is the story of the hobbit Bilbo who is roped in by the wandering wizard Gandalf (McKellen) to join a band of 13 dwarves on their quest to win back their dwarven homeland from Smaug the evil dragon. Danger dogs them at every turn on their arduous journey, coming in the form of hungry mountain trolls, orcs on their gigantic wolf-like mounts, goblins and the inexplicable Gollum. It’s all great to look at, and visually worth every paisa of that expensive ticket you will buy for the 3D experience (I can’t comment on the much-talked-about 48-frames-per-second shooting innovation since I saw the film at a regular theatre). It’s also hard not to be drawn to the underlying theme of mighty deeds from seemingly small  people.

But The Hobbit suffers from the same problem that James Cameron’s Avatar did:  Jackson too seems to have fallen in love with his own work. There are only so many panoramic views you can take of gorgeous landscapes, so many fearsome creatures you can gasp at, so many lingering shots of weathered faces you can admire, if the accompanying story has been stretched inexorably to fit into nearly three hours of directorial self-absorption. Not surprisingly, the most memorable scenes and moments in The Hobbit go beyond the carefully laid out feast for the eyes: Bilbo’s fascinating first encounter with the very intriguing Gollum in an atmospheric hideaway; the disturbingly beautiful singing by the dwarves when they gather at Bilbo’s home at the start of the film; Gandalf’s wisdom and sense of humour; and the perky, animal-loving wizard Radagast. If only Jackson had given us more of this warmth and less of cold splendour. Personally, I was torn between widening my eyes in wonderment and keeping myself from nodding off to sleep as I watched The Hobbit: An Unexpected Journey. Damn you Peter Jackson! How could you get it so right and yet so wrong?!