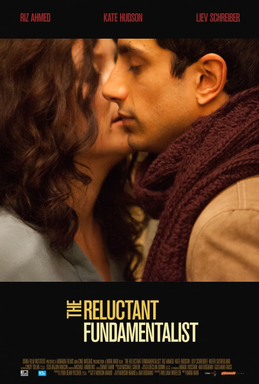 If you are among those who’ve loved The Reluctant Fundamentalist by celebrated Pakistani author Mohsin Hamid, you may be tempted to slaughter me, but this is the honest-to-god truth: I found the book superficial, sometimes simplistic, often playing to the gallery in a way some people do while discussing a wronged minority, and it didn’t move me.

The reason why director Mira Nair’s film works is that it manages to be moving despite the protagonist’s seemingly flimsy motivations. Nair’s The Reluctant Fundamentalist (screen story by Hamid & Ami Bhogani, screenplay by William Wheeler) takes the skeletal conversation in the book between the Pakistani protagonist and an American man in a Lahore marketplace, and breathes life and feeling into it. From the distant figure in the cold-as-steel book, Changez Khan in the film becomes a living, breathing man whose post-9/11 journey draws you in.

A decade has passed since that apocalyptic day. Changez (Riz Ahmed) who once chased the American Dream on Wall Street in dapper suits is now back in Pakistan, bearded and in traditional attire, teaching at a local university. At a restaurant in Lahore, he recounts his life in the US to an American journalist (Liev Schreiber) while a cloud of suspicion hangs over his head regarding the kidnapping of a US citizen in the city. Using the flashback-through-an-interview-(or-is-it-an-interrogation?) format, the film takes us back in time with him to New York where he worked as a financial analyst. We meet his professional mentor Jim (Keifer Sutherland), we watch him fall in love with the emotionally conflicted Erica (Kate Hudson), and gradually, we also see that idyllic life unravel after the WTC attacks: we see him humiliated by a strip search at a US airport simply because he looks different, we see colleagues suddenly view him with suspicion, we witness another humiliating episode with the police, and we see the strain tell on his relationship with Erica.

The interesting difference between Changez’s story on page and on celluloid is the treatment of Erica which provides a lovely showcase for the misunderstandings that arise when a couple are dealing with external stresses. Was Changez over-reacting to Jessica’s art show or was a Pakistani boyfriend really a badge of honour for a bohemian artist to raise her “street cred”? His cruel words to her at that point, in a deliberate attempt to wound her, allows the story to depart from the book’s black-and-white interpretation of race relations in which the brown-skinned hero is not critiqued. There is also a moment of utter frankness when Changez describes his reflex reaction to 9/11 when he watched on television as the twin towers collapsed: Before conscience kicks in, have you never felt a split second of pleasure at arrogance brought low? … It's a flash of a feeling that may have been felt by many worldwide that political correctness would prevent most from articulating.

Pulsating through the story is some wonderful music that includes the ethereal sounds of Pakistani qawwals singing as the opening credits roll out. Nair’s well-chosen cast is headlined by the remarkable (and remarkably attractive) British Pakistani actor Riz Ahmed who plays Changez with a stoicism that never fails to convey the depths of his emotions. Kate Hudson with her flirty charm is a pleasant foil to his more guarded exterior. Schreiber, Sutherland and (in much briefer roles playing Changez’s parents) Shabana Azmi and Om Puri are spot-on. Even that Lahore marketplace is peopled with actors who deliver the occasional throwaway dialogue without being clichés of Pakistan.

Where the film does chuck a stereotype at us is with Changez’s workplace contemporaries. The only one who is supportive among them is the black guy while the white girl and boy eye him warily. Oh c’mon!!! So much more believable is the white boss Jim who hits the nail on the head when he urges Changez to snap out of his disillusionment with these words: If you throw a stone out of that window it will fall on a person who feels victimised. Maybe this – Changez’s relatively minor grievances – are the reason why it’s not easy to be convinced of his motivations for throwing away everything he’d worked so hard to achieve in the US. Wherever in the world you are, if you are a minority you will face prejudice of some sort. Do Changez’s actions suggest that instead of fighting this prejudice, we must run away from it?

Well, a difference of opinion with the protagonist is no reason to dislike a film. That we are provided a counterpoint via Jim is good enough. People have been embittered by far less than what Changez went through. Those who justify racial profiling by America’s security apparatus should realise the harm it causes. Changez’s experiences are a far cry from the tragedies that befell the heroes of that gorgeous Pakistani film Khuda Ke Liye and Bollywood’s poignant New York…but Changez too is a reality. The Reluctant Fundamentalist is not in the league of Nair’s best films, Salaam Bombay and Monsoon Wedding, but it’s thoughtful and thought-provoking all the same. For that and for Riz Ahmed, it’s definitely worth a watch.