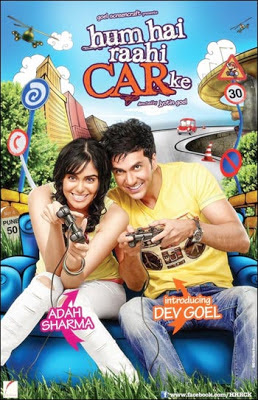 How poorly thought out this film is should be clear to you from the fact that the poster has the words “introducing Dev Goel” planted right on the actor’s crotch. Sorry if that sounds mean but having sacrificed over two hours of my life on the nothingness that is Hum Hai Raahi Car Ke (HHRCK), I think I’m entitled to my anger.

The things people do for love! They kill, they kill themselves, they kill reputations. And this week a man risked destroying his father’s legacy by launching a son in Bollywood. The most saddening discovery I’ve made about HHRCK is that the talentless lead actor Dev Goel is the grandson of Devendra Goel who made the Sadhana-Balraj-Sahni-Sanjay-Khan-starrer Ek Phool Do Maali, the Meena Kumari-Rajendra-Kumar-Honey-Irani-starrer Chirag Kahan Roshni Kahan and other notable hits from the 1950s-70s. HHRCK is directed by Devendra Goel’s son Jyotin Goel who too has made a few films in the past couple of decades. This one is his launch vehicle for his son Dev.

That HHRCK is bad is an under-statement. That Dev can’t act is another. Fear not, Daddy still makes sure the beta is pretty much in every frame in the film, even giving him an opportunity to take off his shirt in one scene, dance elsewhere and emerge from a helicopter in full Shah Rukh Khan-K3G style in the finale! If you want to know how tough it is for an outsider without godparents to survive in Bollywood, watch pretty Adah Sharma – yes, she who we’ve already seen in Vikram Bhatt’s 1920 – inflict upon herself the role of this film’s heroine for which she has to actually kiss this boy!!!

Dev and Adah play childhood friends Shammi Suri and Priyanka Lalwani, he a computer genius, she a call centre employee. The two go on a road trip from Mumbai to Pune during the course of which they have a series of misadventures that begin with a man in gorilla costume urinating in a forest. Never mind how the film ends or how it gets there. Let me say it again: Dev Goel can’t act. He covers up his inadequacies with over-acting and a swagger. Even the appearance of big names like Sanjay Dutt (playing a cop called Karan Karate) and Juhi Chawla (as a doctor who speaks in sign language to facilitate her incessant paan chewing) can do nothing to redeem this irredeemable film. For the record, Juhi manages to look incredibly pretty in HHRCK despite the poor lighting.

If you are the sort who always wants to see your glass as half full, then here’s the only reason I could find for you in this boring film… Why on earth, you ask, would Sanju and Juhi associate themselves with this embarrassingly pathetic venture? Answer: As a friendly gesture because they’ve worked with Jyotin Goel in the past. Sniff sniff! There is still some goodness left in this world. Getting emotional over that nugget of information is the only way to survive Hum Hai Raahi Car Ke with its gemological offerings such as these… When Karan Karate sees an unconscious man in the backseat of a car, with both hands firmly cupping his testicles, he says, “Bird in hand is worth two in bush?” Apparently that’s funny. The villain of the film tells the lead pair that he bought a pair of Jimmy Choos for Rs 1 lakh a shoe, to which Shammi responds with all the confidence that comes from an actor who is convinced that he’s delivering a killer dialogue: “Ek lakh ek joote ka? Lagta hai Jimmy tujhe poora choo bana gaya.” Apparently that too is funny.

This isn’t even one of those films that’s so bad, it’s good. That honour must go to such treasures as Tum Hi To Ho, Chargesheet, Tension Doooor and Chitkabrey Shades of Grey that we’ve faithfully tracked on this blog. Hum Hai Raahi Car Ke is just plain, hellishly, sleep-inducingly dull.