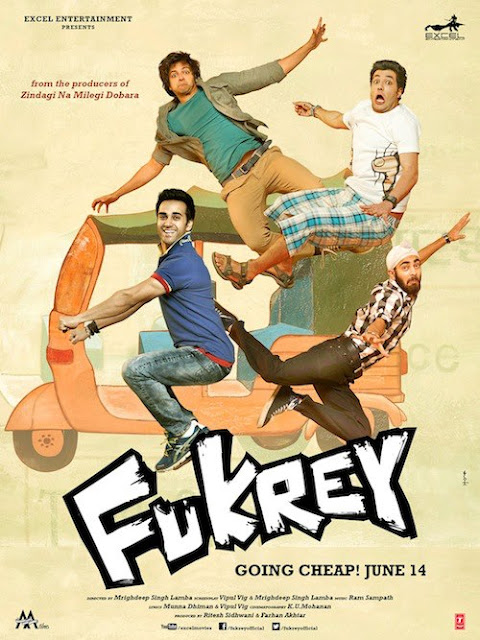 Mrighdeep Singh Lamba’s Fukrey is so enjoyable that I feel bad to admit to the second part of my review: that the film needs just a little more depth, just a bit more flesh, that I wish I’d got to know the characters just that little bit more. It’s hard to shrug off the niggling feeling that there’s something missing in Fukrey, but it’s endearing and entertaining all the same.

The title of this film set in Delhi is a reference to its four good-for-nothing protagonists. Honey (pronounced Hunnny) and Chuchcha (believe it or not, that's his name!) are friends and habitual lottery-ticket buyers who’ve been flunking school together for years but have now found a way to beat the system and possibly finally make it to college. Laali – a correspondence course student of B.Com (Pass) first year and son of a dhaba-cum-sweet-shop owner – dreams of doing the second year of his course in the college where his sweetheart now studies and is drifting away from him. Zafar is an aspiring musician who’s gradually losing his spirit as he discovers how tough it is to break into the music industry. When the four get involved in a get-rich-quick scheme hatched by Hunnny and Chuchcha, one thing leads to another and everything spirals out of control. Before the situation is resolved, they get involved with the pimp-cum-drug-dealer Bholi Punjaban. They also end up dragging Hunnny’s new girlfriend Priya and Zafar’s fiancée Neetu into the mess. The situations they get themselves into are bizarre, partly because Fukrey is determined to entertain us with over-the-top irreverence; and partly because the boys are guileless, harmless creatures even though they’re layabouts.

The screenplay doesn’t satisfactorily flesh out the characters, but the situations are so true to life and hilarious, the dialogues so rooted in the soil of Delhi, that it’s impossible not to get drawn in. Half the battle was won for Fukrey by casting director Honey Trehan. TV actor Pulkit Samrat is perfect as the smooth-talking Hunnny and has shown remarkable versatility over a career spanning just two films (although I’ve seen his debut film Bittoo Boss, I had to re-watch the trailer thrice to be sure he’s the same guy). Bonus: he’s cute as a button. Manjot Singh hits the bull’s eye here too as he did in Oye Lucky! Lucky Oye! Ali Fazal’s Zafar is the least well written of the four characters but he acquits himself reasonably well. The live wire of the lot is Varun Sharma playing Chuchcha. He’s been given fantastic lines that he delivers with impeccable timing. What an incredible performance!

Bringing up the rear are two very attractive and dependable actresses who we need to see more of in Bollywood: playing Hunnny’s Priya is Priya Anand who was Sridevi’s niece in English Vinglish; Neetu is Vishakha Singh who was Deepika Padukone’s fellow rebel in Ashutosh Gowariker’s Khelein Hum Jee Jaan Sey and also stars in this week’s other release, The Ankur Arora Murder Case. Pankaj Tripathi too is wonderful as the college-security-guard-cum-mini-power-centre-on-campus. If there is a marginal disappointment here it’s Richa Chadda’s Bholi Punjaban… Perhaps the build-up to the first appearance of her character in the film is too much. The writing of Bholi has a trying-too-hard-to-be-cool feel to it. The result: a character and a performance that don’t live up to expectations.

The nicest touches in this film come from its very naturally portrayed boy-girl relationships. Hunnny is a typical Delhi roadside Romeo – other Hindi film makers could learn a lesson or two from the writing here which delivers a true-to-life, raffish character without once offensively glorifying misbehaviour. Laali’s assumptions about his teacher’s feelings for him are also heart-stoppingly, ridiculously real. Thankfully, the girls are not shortchanged in terms of space or significance though the boys are the focus of Fukrey. It’s also nice that the film does not make a big deal of the fact that the quartet includes one Muslim and one Sikh. The camerawork too merits a mention, particularly one intriguing overhead shot of Hunnny and Chuchcha lazing about.

Lamba has evolved dramatically since his first film Teen Thay Bhai in 2011. The loudness and crudeness of that film have been thrown out of the window and what we have in Fukrey is genuine, gentle, intelligent humour. The music (Ram Sampath) and lyrics (multiple credits) beautifully complement the dialogue writers. When a voice in the background chants “no ladki, no hope… no ladki, no scope”, you feel the heat and dust of Delhi in the writers’ veins. Those veins throb with life when Chuchcha mistakes a guitar for a “vyolin” and Hunnny mentions a “Pomerian” dog, harking back to the utterly natural fashion in which Bittoo and Shruti conducted their “binness” in Band Baaja Baaraat. BBB had amazing depth, Fukrey unfortunately does not. But if you’re in the binness of not analysing your entertainment too much, Fukrey’s the way to go!